Student makes chess pieces out of fungi as plastic supplement 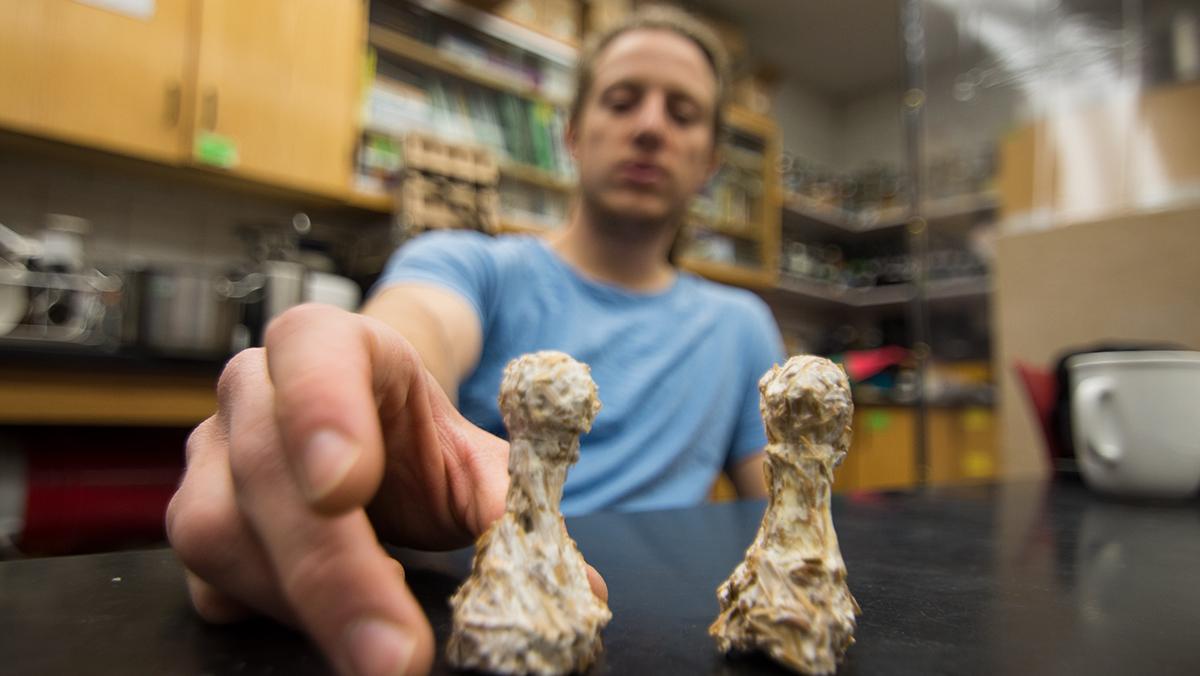 In a lab on the second floor of the Center for Natural Sciences, Ithaca College senior Sam Donato, an environmental studies major, checks on his latest experiment. He opens an oven and carefully takes out three chess pieces and sets them on the black lab bench. These chess pieces seem ordinary, even with bits of straw stuck inside them.

Donato soon explains that these chess pieces are unlike their commercial counterparts because they are made from fungus instead of plastic.

“I focus on growing particular strains of fungus in a certain type of way in order to replace commercial products, specifically plastics,” Donato said.

Most fungi produce mushrooms, which are the sexual fruiting body of fungus, and the fungi Donato works with, oyster mushrooms, are no different. However, Donato does not allow the organism to produce a mushroom for his research.

“I manipulate the organism’s life cycle and essentially stop it growing at a point that I want to use it at,” Donato said. “I am working with the stage right before the actual fruiting of this mushroom. I work with what’s called mycelium, which is the intercellular network of information exchange that the fungus uses to propagate its body.”

To actually grow the chess pieces from fungus, he introduces mycelium spawn mixed with straw into 3–D printed chess molds. Because fungus does not have a particular type of growth, it can grow in any shape, and Donato chose to create chess pieces. 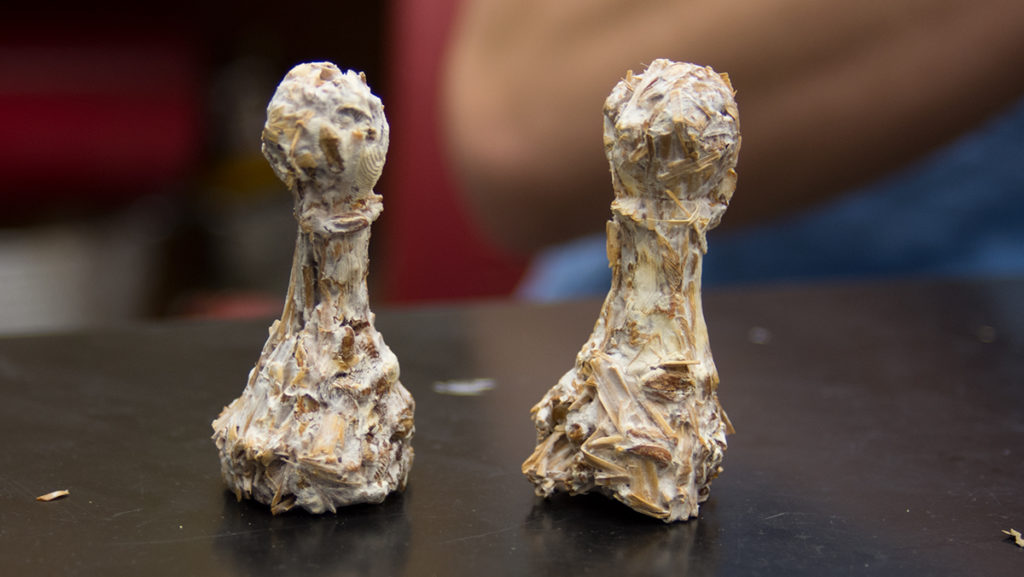 Teddy Zerivitz/The Ithacan Donato grows fungi in molds created with a 3D printer. The fungi is then dehydrated in an oven to form it into chess pieces.

Ryan Bouricius, lab manager of the 3–D printing lab and a physics student, helped Donato develop the designs for the molds.

“We weren’t sure going in if the plastics that the printers use would have been suitable for growth, but it was something that was worth giving a shot,” Bouricius said. “So I helped him by taking a design of the chess piece and then altering that to make a 3–D–printed mold out of it.”

Donato said that after the fungus grows into the shape he desires, he extracts it from the mold, dehydrates it in an oven and is left with a fully functional chess piece.

“At the end, you have this hard and rigid chess piece, but instead of a plastic that may have been based in petroleum, it is fully biodegradable,” Donato said. “Though the organism is no longer living, it’s still incredibly productive in terms of biodegrading and recycling itself into nature once disposed of.”

Donato said he became interested in studying fungus after reading about mushrooms in class.

“I kept asking questions and I was really interested in what makes a mushroom … and that brought me to the actual organism’s body itself — the mycelium,” he said.

He’s been working with Jason Hamilton, Donato’s research professor and chair of the Department of Environmental Studies and Sciences, for about three years. Hamilton said he was excited when Donato proposed this project.

“My first thought was and still is that it was a fantastic idea,” Hamilton said.

Hamilton said he believes Donato’s research is at the forefront of sustainable fungal materials research.

“If this works, chess pieces are kind of irrelevant because it means that you can grow all sorts of small solid objects that people can then use for as long as they want and again, there’s no trash, and in some sense, there’s really no pollution in the process, either,” Hamilton said.

Donato said he hopes that one day his research will contribute to the field of mycology, the study of fungi, and help decrease society’s reliance on plastics. He envisions a future where plastics are replaced, one–for–one, with fungus.

This is not yet a mainstream idea, but one company, Ecovative, is pursuing mycelial technologies to create sustainable products, like shipping materials and home decor.

However, Donato believes that the cultural stigmas surrounding fungus and mushrooms will impact how quickly others adopt these ideas.

“I think that as we progress as a community and a population, we need to start working to realize that human beings could create a relationship with fungus that could effectively help us answer a large number of questions in terms of how do we turn around our unsustainable ways and continue to live on our earth with a mindset of longevity,” Donato said.