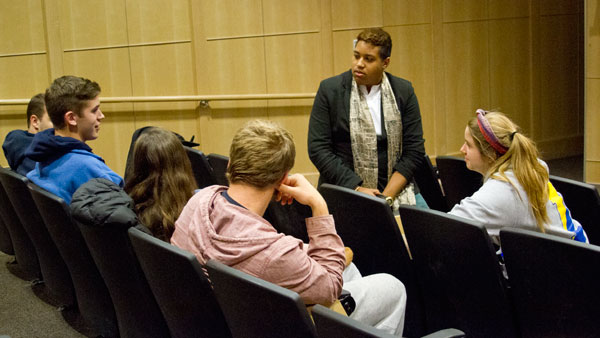 Ithaca College’s group Created Equal: Rising Together for Queer Liberation, also known as IC Created Equal, has organized three events, covering topics like locker-room culture and hyper-masculinity, as a part of Masculinity Month. This month is a time to raise awareness about masculine culture and how it affects different aspects of social structures.

Junior Crystal Kayiza, political chair of IC Created Equal, said the organization has used the month of November to recognize what it is like to be a male in a hyper-masculine society.

As one of the four lesbian, gay, bisexual, transgender, queer–organized groups at the college, Kayiza said the group is more discussion-based and focuses more on critical thinking to fix issues.

The other LGBTQ groups include Athlete Ally, Prism and Spectrum.

The first event, Men In Sport, was co-sponsored by Athlete Ally. The program, which was held Nov. 6, focused on locker-room culture and how the separation of the gay or lesbian communities from the locker room is bad for the sports community.

Sophomore Kyle James, president of Athlete Ally, said in sports, the perception is that gay men are more feminine, and femininity is commonly associated with not being good at sports and with weakness.

During this discussion, the organizations dedicated time to discussing how to end homophobia and transphobia in sports teams at the college with the goal of changing the opinions of LGBTQ athletes in sports, according to the event’s Facebook page.

Junior Candace Burton, co-president of Created Equal, said the group has achieved important goals during the month, like getting people to think about inclusive masculinity and how its definition affects society.

New to the college this year, Athlete Ally is an organization that focuses on LGBTQ athletes.

James has separated the group from Created Equal by focusing on the aspect of the local sports community rather than the global community.

“[Athlete Ally’s] goal is to start gaining a feel for what the climate is now for an LGBTQ athlete in the sports community at Ithaca,” James said. “We gained more insight in the past month than we thought we would.”

In August, the Huffington Post named the college the third-most LGBTQ friendly school in the nation. Members of both Created Equal and Athlete Ally warned that this gives the student population a false perception of inequality being less of a problem on campus.

“People assume that just because Ithaca College is a LGBTQ-friendly school that we are perfect in every area, which definitely isn’t true,” Kayiza said. “I think the first event did a really good job on finding ways to improve.”

The second event, “Bros Before Hoes: Hyper-Masculinity and Hookup Culture,” was held Nov. 14. At the event, Created Equal and Feminists United presented the idea of a middle ground between the masculine and feminine binary.

Burton said the group watched a Ted Talk by Tony Porter, co-founder of the group A Call to Men. The video talks about the societal pressures men face to be masculine and how males young and old force each other to be masculine.

Burton discussed what to expect from Created Equal in the upcoming years. Burton said Created Equal plans to focus on the small acts of discrimination on campus.

“In the future, we are going to try to focus on the microaggressions of sexuality, and not speak so much in broad terms,” Kayiza said. “Localize those issues on campus, see what solutions we can come up with that will benefit the community as a whole.”

The final event, held Nov. 19, titled “Cross-Campus Solidarity: A Dialogue on Masculinity,” is focused on finding a definition for inclusive masculinity and how the college community can begin to resolve LGBTQ issues on campus.

“Without masculinity, there would be no femininity or vice versa,” Burton said. “Masculinity and how it affects culture is not a conversation we have enough.”

James said Athlete Ally will be meeting with Susan Basset, the college’s athletic director, to discuss ways to improve the environment around the LGBTQ community in Bomber athletics, and to continue the discussion created by Masculinity Month.