Student petition calls for changes to parking system on campus 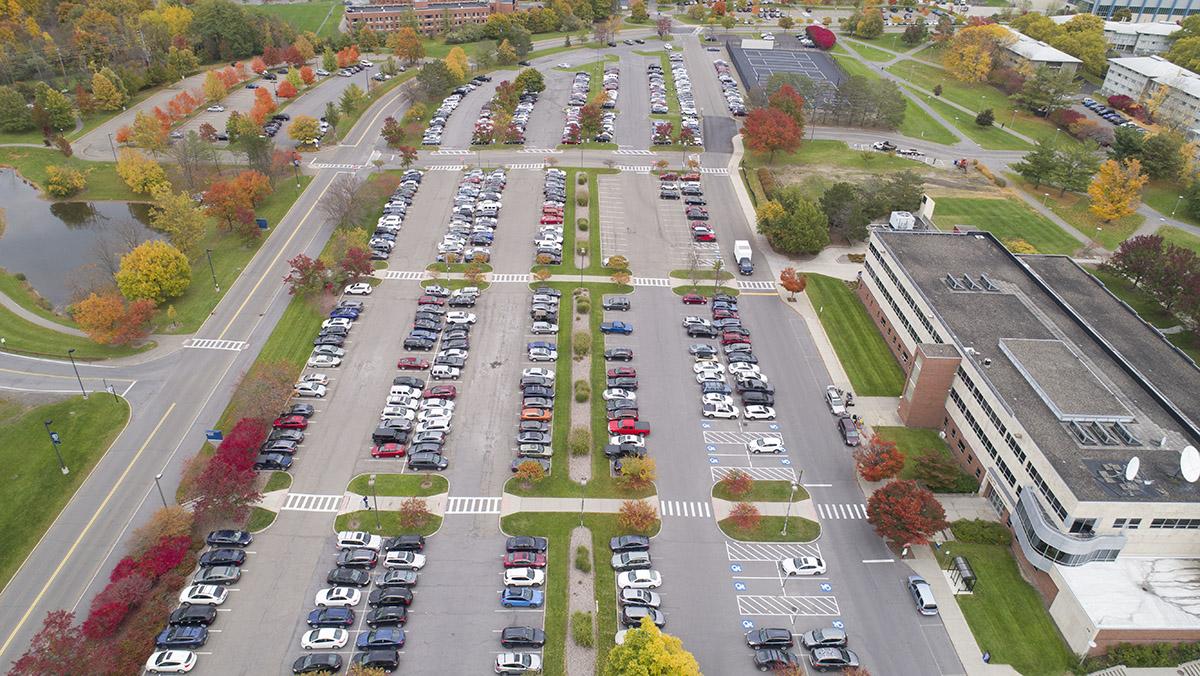 Thomas Kerrigan/The Ithacan
The inability to park in certain lots is forcing students to park in unpermitted lots and obtain parking violations. In her petition, senior Khami Auerbach suggests that the college should expand parking by changing some blue lots, which are meant for faculty, into red lot spaces that would accommodate more students.
By Lucia Coutermarsh — Contributing Writer
Published: October 26, 2022

Ithaca College senior Khami Auerbach started a petition to fix inadequate parking on the college’s campus, stating that the current parking system is not providing students with enough availability and subjecting them to excessive fines.

“Myself and other people, we’ve been talking about parking for a while and keep getting frustrated and feel like nothing has been done about it,” Auerbach said. “I thought if I get more people to sign onto it and maybe give anecdotes, that might be a little bit more helpful.”

The inability to park in certain lots is forcing students to park in unpermitted lots and obtain parking violations. The petition, which was created in early October on Change.org, has garnered 78 signatures so far. Auerbach suggests in her petition that the college should expand parking by changing some blue lots, which are meant for faculty, into red lot spaces that would accommodate more students.

Auerbach said she has received more parking tickets — since bringing her car to campus for the 2021–22 academic year — than she would have expected. She said she was ticketed for exceeding the 15-minute time limit in a parking space when she claimed she went inside a building to use the bathroom. She was also fined for parking at the Ceracche Center, where she had class, and could not find any available parking in the permitted lots at Towers or Terraces, which were already far away from the Ceracche building.

“I’m paying for a parking spot; I shouldn’t have to walk if I brought a car with me to school,” Auerbach said.

Amy Shippos, parking services and transportation coordinator in the Office of Parking and Traffic Services, said the number of permits ordered by students and faculty does not reach the number of available spaces on campus, however, because of the structure of the parking lots, certain lots can become particularly busy during different times of the day.

“Will there be areas that are congested just because of classes happening?” Shippos said. “Of course. That’s just kind of a natural thing that happens with parking. Once you’re out of spaces, you can’t make more spaces. I would love for everybody that lives in one residence hall to park exactly where their residence hall was, but we can’t control that with the way our parking is structured at this time.”

Shippos said the process of collecting data and analyzing parking habits is an ongoing process that happens year-round. Studying the parking activity in the blue section of J-lot helped the Office of Parking and Traffic Services convert part of the lower blue lot section into a red lot section. Shippos said the possibility of turning more blue spaces into red spaces would be unknown at this time since the number of people with permits and people commuting to campus changes throughout the year.

“What we do is we collect all the data, we bring it off to the next people and the campus partners, get their feedback and see if there’s any availability of change that we can do,” Shippos said.

The price of parking permits for students is $90 for graduate students, $142 for upperclassmen and $500 for first-year students. Parking is free for faculty.

Some fees for parking violations include $35 for parking without a permit or in the wrong lot, $40 for parking in restricted or reserved parking, $100 for parking in a fire lane or ADA accessible space and $75 for a fraudulent permit. Prices of parking permits and fees are determined by the college, not by Parking Services or the Office of Public Safety and Emergency Management.

Auerbach wrote another parking petition in summer 2019 but said nothing came of it. Now, with her second petition, Auerbach said she hopes it will gain more traction.

Junior TJ Bogart and sophomore Jackson Gruenke both signed the petition and gave examples of personal experiences and problems they have had with parking. Gruenke said via email that he had received seven parking tickets during his first semester on campus with a car because of signage he said was misleading.

While he lived in the East Tower, availability to park in red lots was minimal, however blue lots were rarely full. He also agreed with Auerbach, saying that making some blue lot spots available for students could improve students’ ability to park.

On Nov. 29, 2021, parking services stated in an email that they had converted a blue lot section of lower J-lot into red lot parking for students living in the Towers. This gave students an additional 55 parking spots.

Bogart had lived in West Tower last year and had gotten used to walking from the far side of East Tower to find a space for his vehicle. He said he was frustrated at the fact that as someone who pays for parking, he was not able to park as close as possible.

“As a student, I cannot prioritize where my car goes over the responsibility of a student [going to class] in a secluded campus where parking is limited,” Bogart said. “I am not trying to be lazy. I am just trying to get the best use of my money.”

Bogart said he wishes the college would do a better job of addressing the issues students are speaking out on.

“The [college], in my experience here as a student, hasn’t always given me the best bang for my buck in terms of responsiveness to the needs and wants of the students,” Bogart said.