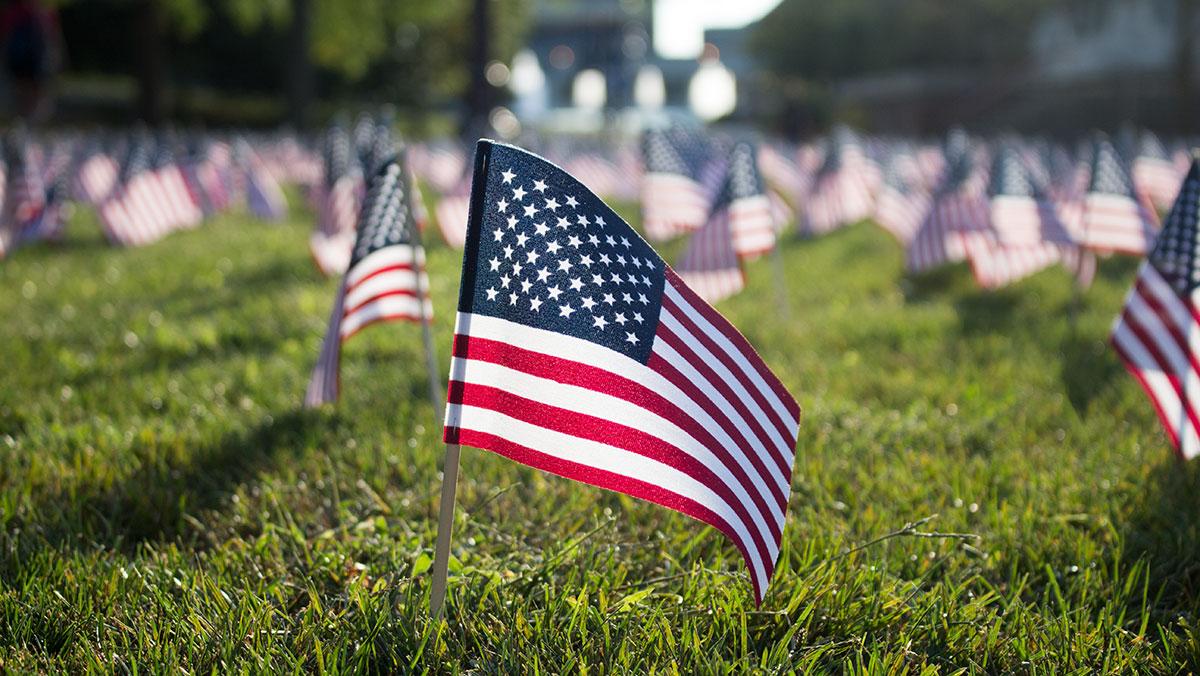 Yana Mazurkevich/The Ithacan
2,977 flags were placed on the Academic Quad Sept. 11 to commemorate the lives lost in 2001. Student political clubs collaborated on the creation of the display.
By Jonah Swiatek — Contributing Writer
Published: September 15, 2015

A fourth student political organization, the Ithaca College Young Americans for Liberty, is starting up on campus this semester. Despite differences in political ideologies, IC YAL, IC Progressives, Ithaca College Democrats and IC Republicans are all hoping to increase student participation in politics and voting, especially as the 2016 election season warms up.

Senior Sean Themea, founder and chapter chair of IC YAL, said he saw the need for a different type of political group.

“[IC Conservatives] branched off into YAL and College Republicans, so we can have one organization that’s focused on the education, … the activism, … that realm, and the other organization is focused on the political side, the election cycle, the networking, and that will give us more focus and hopefully more outreach too,” Themea said.

Themea said his club is not a political party, but a movement.

“Young Americans for Liberty is an organization that seeks to educate, train and mobilize young people for the Liberty movement,” Themea said. “The Liberty movement would not be a party, Republican or Democrat. It’s about … the idea of individual, inalienable rights.”

Despite the distinction of IC YAL and IC Republicans as two separate clubs, they still share an ideological bond to conservatism.

“Now we have two different groups, but we’re still going to work together in some aspects,” Kyle Stewart, president of IC Republicans, said.

The leaders of Ithaca College Democrats, IC Republicans and IC YAL collaborated Sept. 10 on a project to commemorate the victims of the 9/11 attacks on the United States.

James Dellasala, co-president of Ithaca College Democrats, was among the students who helped to place 2,977 flags in the center of the Academic Quad to represent each of the lives lost during the attack.

“9/11 isn’t something to be politicized, it’s something we should all come together for,” Dellasala said. “As someone who was there [in New York City] on 9/11, I was just very appreciative to see what we were able to do. I’d definitely be up to organize or take part in that again next year.”

Though the four political organizations have varying views, they agree that debate is the preferred medium for sharing ideas, opinions and observations. Last year, the groups convened on St. Patrick’s Day to discuss current issues. Each club gave the others an overview of their mission, and then the floor was opened for debate, mediated by a communications professor.

Tate Dremstedt, co-chairman of IC Progressives, said plans for another debate are underway. Stewart and Dellasala also said they are interested in having debates with their counterparts.

“First, we want to have a series of discussions — debates — with the other political organizations,” Stewart said. “That’s more about getting the entire campus educated on the issues and seeing where everyone falls on the political spectrum.”

The leaders of the student political groups are also drawn to debates for their inherent ability to inform and educate. Stewart, Themea and Catherine Proulx, co-chairwoman of IC Progressives, each said much of what their clubs seek to accomplish is to increase the general political awareness of members of the college community, leaving them to make their own informed choices.

“Voter awareness and election knowledge is important,” Proulx said. “This semester, what we really hope to do is get information out there, help voters be educated and also inspire people to vote and to vote knowledgably.”

Dremstedt said it is important to get the younger demographic to vote in the first place.

“Our main goal this election season is going to be voter registration,” Dremstedt said. “The most important part for our generation is to get people registered to vote and get them to actually vote.”

Dellasala said the 2008 presidential election showed the significance and importance of the 18–24 voting demographic — an upsurge in youth voters was responsible, in large part, for the election of President Barack Obama.

“Young voters basically swung the 2008 election,” Dellasala said. “That election might’ve looked very lopsided on the Electoral College front … if it wasn’t for the activism of young people and the drive of young people to vote.”

This election cycle, two campus clubs are also making an effort to get involved directly in the political process.

In the past, IC Republicans has helped local candidates, which Stewart plans to continue. He said this could include helping Republican opposition to Svante Myrick, mayor of Ithaca, who is currently running for another mayoral term unopposed.

Stewart also hopes to continue IC Republicans’ working relationship with Congressman Tom Reed, who represents New York’s 23rd Congressional District and is up for reelection in November 2016. Ithaca is part of the 23rd district. Stewart said this may include inviting Reed to campus for an event.

On the national level, Stewart said members of IC Republicans could get in contact with a national presidential campaign to set up “phone banks,” which register club members’ cellphones to make calls to voters in swing states.

Dellasala said Ithaca College Democrats will likely help with voter registration efforts as they have done in the past.

Leaders also expressed interest in having a speaker to talk about current political issues. Stewart said he is considering collaborating with the Cornell University chapter of College Republicans to find a speaker. Proulx, Dremstedt and Dellasala also mentioned the possibility of bringing speakers to campus.

“One of the most important things we can do as a student club is to get people to be more aware and actually think about political issues,” Dremstedt said.