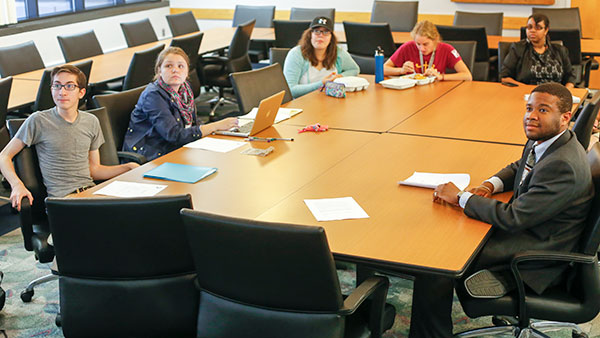 After being inactive last year, IC Democrats is rejoining the campus’ other two political-party organizations, IC Conservatives and IC Greens, on the active political front.

All three groups have big plans, including supporting the candidate whom they think should represent New York’s 23rd district in the U.S. House of Representatives. In addition, Joshua Kelly, chairperson of IC Greens, said the three organizations will be holding a political discussion at 6 p.m. Sept. 25 in Textor 101 to discuss the differences among their ideologies.

Kelly, a sophomore politics major who founded IC Greens last year, said the event will give each group the opportunity to speak about their specific beliefs and answer questions during a Q&A session. After the event, there will be forms for people to register to vote, he said.

Meanwhile, IC Democrats and IC Conservatives have set their sights on the U.S. Congressional elections for New York’s 23rd district.

Cummings re-formed IC Democrats this year after a one-year hiatus. He said the organization was active two years ago but fell apart after the previous president, Rob Flaherty ’13 graduated, and no one stepped forward to lead the group.

Couce also said the race is going to be close. He said his position toward Robertson is that she is too liberal on many issues, such as fracking.

The IC Conservatives are phone-banking in support of the Reed campaign, Couce said, as well as trying to collaborate with other conservative organizations in the Ithaca area. He said the group is also trying to get Reed to come to the college to speak.

IC Greens also weighed in on the congressional race. Kelly said the organization tends not to support democratic candidates because the group believes they often cater to moderate voters instead of holding true progressive values. He said this is why IC Greens are not supporting Robertson.

“While she does hold many progressive values, we only truly endorse candidates that accept no money from businesses, corporations, PACS or other large money-generating organizations,” he said. “And she does collect money from them.”

Cummings said he will be using the IC Democrats organization as a branch Robertson’s campaign. This will involve the group organizing door-to-door canvassing opportunities and disseminating information around campus, he said.

In addition to the election, each group said it has other plans for the year.

IC Greens brought Howie Hawkins, Green Party candidate for governor of New York, to campus Sept. 12, and Kelly said the group will also be putting on a production of Rent on Dec. 11–13.

Couce said IC Conservatives are working to bring a big-name conservative speaker to the college, such as U.S. Rebublican Rep. Paul Ryan from Wisconsin; U.S. Sen. Marco Rubio from Florida; or former senator Rick Santorum, who was a candidate for the 2012 Republican Party presidential nomination.

Couce said he also wants to focus on presenting the group as an outlet for people who may otherwise be afraid to express their political opinions at the college, which he said is undeniably liberal.

After the election, Cummings said, IC Democrats wants to bring speakers to campus, although he didn’t reveal who those speakers may be. In addition, Cummings said the organization will be focused on increasing student engagement in politics in Ithaca as well as the rest of New York and nationwide.

“Our main objectives are to raise political awareness to the community in Ithaca,” he said. “Ithaca College is a very left-leaning university, but I feel like there are not a lot of opportunities for students to be politically active.”