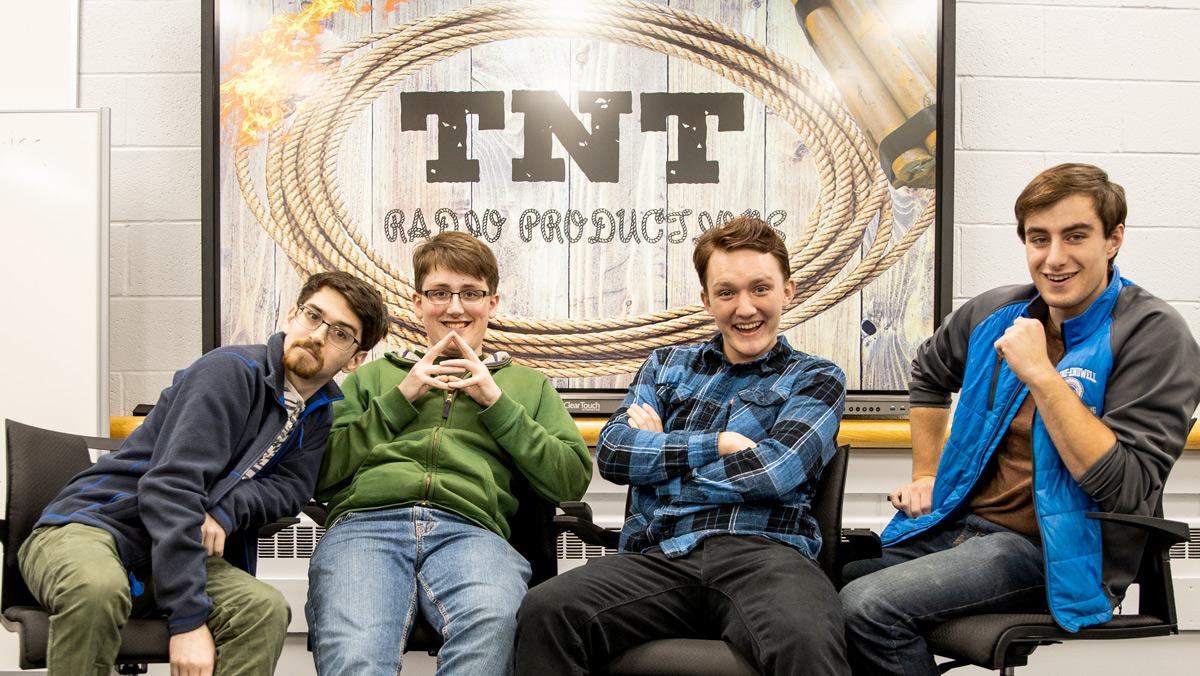 “We want this to be the nurturing ground for creativity,” Pantano said.

TNT Radio Productions meets at 6 p.m. every Sunday in Friends Hall. While there is no specific timeline given for how long it takes the club to work on every piece, the goal of the club is to start publishing its projects toward the end of the semester. No projects have been published yet. Members do not need experience in podcasting or radio prior to joining the club, but there is one thing that club leadership requests of all members.

“If it’s able to be put on the radio and people are able to understand it, we want people to come to the club and bring their crazy big ideas,” Pantano said.

Jennes said he and the group believe there is a lack of diversity in audio content at the college. The college is well known for its radio stations, WICB and VIC. The radio stations have won numerous awards, with WICB recently winning the 2019 Best Sports Reporting (Audio) and Best Podcast awards from College Broadcasters, Inc. The Princeton Review also ranked WICB as the seventh-best college radio station in the country.

“We wanted to fill in a gap and be something that no other club has done before,” Pantano said.

Bradley said the college’s radio stations are different compared to what the club hopes to accomplish.

“What [WICB and VIC] do is primarily music and news based,” Bradley said. “They have a pretty full schedule already with all that they do, so I don’t expect them to really pick us up or anything.”

Senior Peter Champelli, station manager of WICB, said that while radio is an evolving medium, WICB’s programming primarily focuses on music and live podcasts. He said WICB is creating its own podcast network in which it is able to move into more experimental programming.

“Consistency is really important to us and our audience,” Champelli said.

The club is working on its first collaborative project called “First Time.” For this project, group members created long–form pieces — approximately 10 to 30 minutes long — based on a first–time experience. While the name of the project may change, the club leaders said they felt the theme was appropriate as it is the club’s first year running. The group is planning on broadcasting its projects on digital audio content services like YouTube, SoundCloud and other podcast outlets.

At one of the meetings, five club members and the executive board began to create scripts for the First Time project. Scripts for the project focus on a journalist solving a mystery while dealing with gender discrimination in India, a postapocalypse exploration piece and a skit about a meeting among horror film survivors.

Sophomore Vedant Akhauri said he enjoys the atmosphere of the club.

“I really like it,” Akhauri said. “It seems that we have a group of really creative people.”

Akhauri’s “First Time” project centers around a young journalist in Mumbai, India, who is trying to seek the truth. Akhauri said the idea came from his personal experience of working at a news station during high school.

Akhauri was raised in New Delhi, and he said the culture there also impacted his creative process.

“Over there, your options are very limited basically,” Akhauri said. “The creative arts is very stigmatized there, so that’s why I wanted to set it there.”

Akhauri, who is also a member of WICB, said both organizations give him exposure to different types of content.

Berlet said TNT Radio Productions is willing to work with the college’s radio stations in the future, but, for now, the group is solely focused on getting its content out on its own.

IC class releases podcast on media use among young people