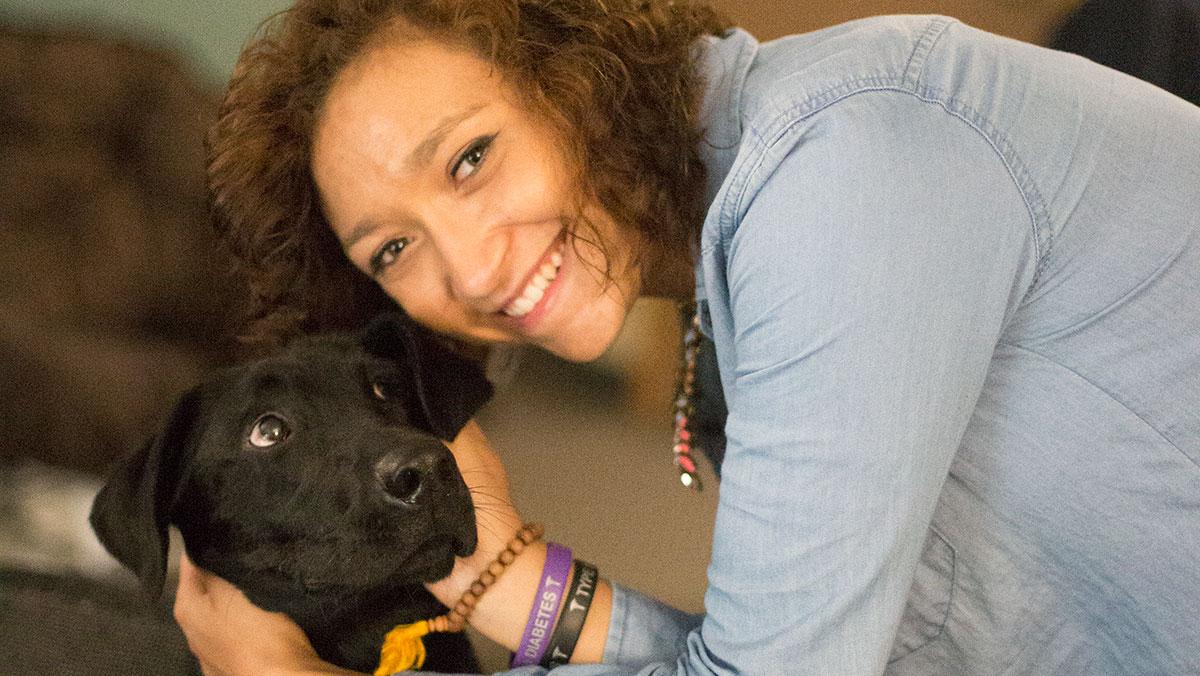 Senior Shanika Bridges might not have survived a diabetic emergency if it weren’t for a certain new companion.

On Sept. 24 Bridges woke up with an extremely high blood-sugar level. Unaware of her current state, she said she tried to go through her daily routine. As she walked to work, Tobbi, her new diabetic alert service dog, kept stopping, sitting down and pawing her to alert her that she needed to check her blood sugar.

Diabetic service dogs are a type of service dog that alerts its owner to check his or her blood sugar when it is too high or too low. Because of Tobbi’s persistent warning, she said, she went to the Hammond Health Center and was able to get her blood-sugar levels down.

During her freshman year, Bridges said, she went through a similar day but ignored her symptoms. Doing so caused a nearly fatal episode of ketoacidosis, a serious medical condition in which there isn’t enough insulin in the body, causing the organs to slowly shut down.

During this episode of ketoacidosis, Bridges said she was extremely dehydrated and was vomiting for 12 hours. Her parents picked her up and got her to the emergency room, where she went into cardiac arrest and then remained in the ICU for 5 weeks, Bridges said. She missed two weeks of school, and her endocrinologist told her that most who go into ketoacidosis do not make it out alive.

Bridges says she has gone into ketoacidosis five times while at the college, all during her freshman year when she lived on campus. She lived at home in Newark Valley, New York, 40 minutes away from campus, during her sophomore and junior years so her parents could keep an eye on her. This is her first year living back on campus.

“I do not want to go through it ever again, and Tobbi, I believe, is the answer for a better life and better health for me,” Bridges said.

Bridges said she wasn’t aware of diabetic service dogs until a year and a half ago. She was watching an episode of “The Harvey Show,” which featured a girl with a diabetic alert service dog who had saved her life.  After watching the show, she started researching them and ultimately decided to get one.

She is the first student at Ithaca College to receive a diabetic alert service dog, as she said she was told by her Student Accessibility Services representative.

Bridges received Tobbi in September through Retrievers by Warren, a nonprofit organization based in Virginia that helps people get the service dogs they need. The company provides the dogs free of cost, but customers are required to fundraise in their communities, according to Erin Coulter, a service dog trainer for Retrievers by Warren.

When Tobbi senses that Bridges needs to check her blood sugar, he alerts her at least five times a day in various ways, such as stopping when walking, yawning and pawing at her.

“Your body gives off a scent when your blood sugars are too high or too low,” Bridges said. “He picks up on that scent, and then he alerts me to check my blood sugar.”

Bridges said she has had type one diabetes for 12 years and needs Tobbi because her body no longer alerts her when her blood sugar is high or low.

“My body is not used to responding to high and low blood sugars that often anymore,” she said.

Senior Erik Jaworski, who shares a Circle apartment with Bridges, said Tobbi had even learned to alert him if Bridges was sleeping when she needed her blood-sugar level checked. Jaworski said he has woken Bridges up in the morning to tell her to check her blood-sugar level.

Bridges said she needed documentation of her disability from her doctor and proof that the dog is up to date on his vaccinations to get Tobbi approved by SAS and the Office of Residential Life for no cost.

Though the college has been very accommodating, she said, she is having some difficulty with students who are not aware that they should not pet Tobbi and distract him. Tobbi has a vest which alerts others that he is a diabetic alert service dog.

“When he is out and about with me on campus, people are not allowed to touch him because he is working,” Bridges said. “People will literally just stop and pet him, and that distracts him from what he’s supposed to be doing.”

Student accessibility specialist Jean Celeste-Astorina wouldn’t comment on Bridges’ specific case due to privacy, but said it is important for students to be aware about proper service-dog etiquette.

“Trying to get the dog’s attention by way of touching, speaking to it or making noises may confuse the dog and take it away from its work,” Celeste-Astorina said. “Do not be insulted if your request to pet or interact with the dog is denied. The owner knows what is best under the circumstances.

Coulter said Retrievers by Warren provides service dogs all over the United States and Canada. The diabetes dogs are between six and 12 months old when they are assigned to their person, and continue to undergo a two-year training program.

Coulter said trainers visit the dogs in the program every three to four months to help with additional training. Bridges said she is training Tobbi by making him comfortable with her day-to-day life.

Coulter said the nonprofit and the customer agree on a certain fundraising goal to help pay for the dogs.

“Because we are a nonprofit, they are able to do fundraising events and every donation is tax deductible,” she said.

Bridges said she aims to raise $25,000 for the organization so others can get the service dogs they need. She has already raised $13,050, which is 52 percent of her goal, through selling bracelets at an animal store in her home town and asking for donations from friends and family.

Anyone interested in donating to Bridges’ fund can do so at www.sdwr.donordrive.com/campaign/shanika.