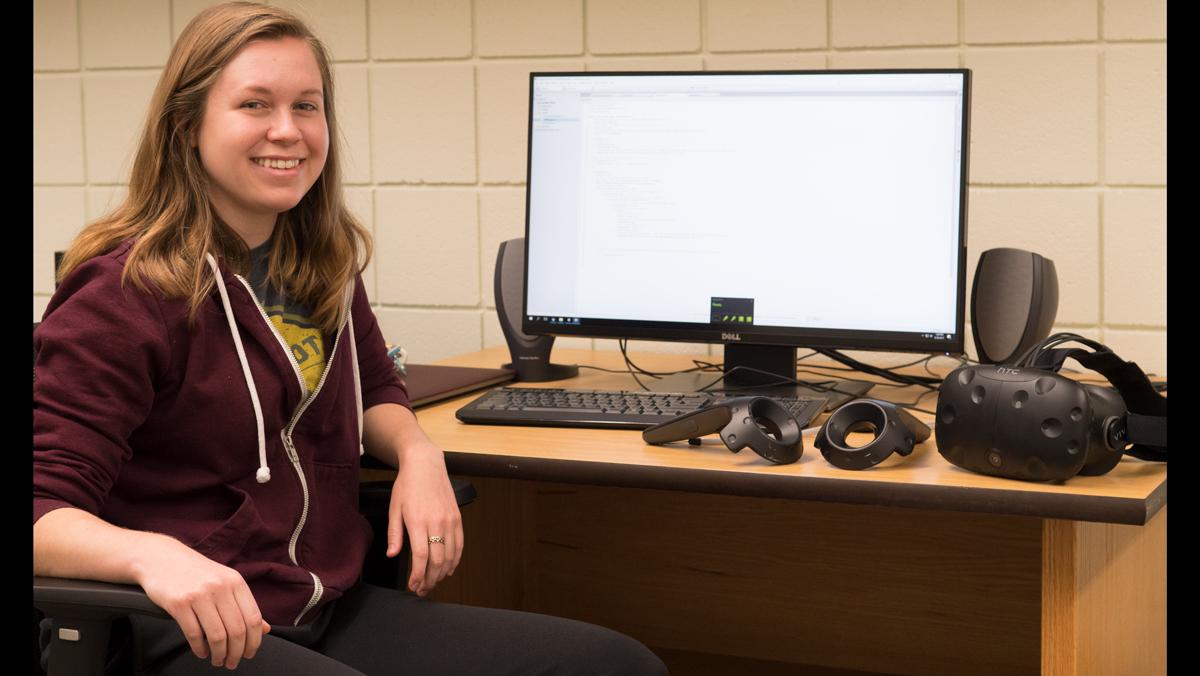 Elias Olsen/ The Ithacan
Junior emerging media major Emily Hammel received a scholarship to the Grace Harper Celebration of Women in Computing for the virtual reality game she developed to help individuals who suffer from concussions. The celebration offers women in computing the opportunity to connect with peers and experts in their field.
By Meredith Burke — Contributing Writer
Published: October 5, 2017

At the end of Spring 2017, junior emerging media major Emily Hammel received a scholarship to the Grace Hopper Celebration of Women in Computing for a virtual reality game she developed to help individuals who suffer from concussions and other balance issues.

The Grace Hopper Celebration of Women in Computing is the largest gathering of women in computing worldwide and provides women with an opportunity to connect with other women in the field, hear about peer and expert experiences and gain career advice. This year, the celebration will take place in Orlando, Florida, from Oct. 4 to Oct. 6. Scholarships to the event cover registration for all three days of the conference, boarding, a meal card for the convention center, airfare and a travel stipend for additional airport fees.

In order to be eligible for the scholarship, student applicants must be enrolled in college at the time of the conference, show satisfactory progress to a degree related to computer science or another technical field and show an interest in computer science.

Hammel and senior emerging media major Kaitlyn Balogh approached Sharon Stansfield, associate professor and chair of the Department of Computer Science, about working on an independent study. Stansfield noticed that both students had an interest in virtual reality and offered them the opportunity to work on a project with her to develop a game that could benefit individuals suffering from concussions.

The game imitates a common exercise done to measure dizziness of an individual with damage to his or her vestibular system — the system that controls balance and spatial orientation. The exercise includes focusing on a patient’s thumb or another object and turning his or her head back and forth while focusing on the object, which can provoke varying levels of dizziness based on the severity of the injury or disability. In the game, both the object and the room are demonstrated to the user through virtual reality. This adds the potential for differing shapes, colors and decorations that can make the exercise more interesting and interactive.

During the early stages of a concussion, patients are discouraged from looking at screens due to the fatigue it may cause their eyes. Laura Gras, associate professor in the Department of Physical Therapy, who assisted with the development of the game, said it would be geared toward patients entering the chronic stages of their concussions, so they could look at the screens.

Hammel, vice president of the college’s Women in Computing Club, is the fourth student from the club to receive the scholarship. Two students received the scholarship last year, and another the year before.

Hammel said that the project was her biggest selling-point when she applied for the scholarship.

The students developed the project using VIVE, a type of virtual reality software. Stansfield later decided to incorporate physical therapy into the project.

“I very much like to work with people outside of the discipline to produce research that’s valuable to, particularly in my case, clinical and medical fields,” Stansfield said.

Gras provided knowledge on balance issues, particularly those experienced by victims of concussions, necessary for determining the game’s objectives and basis.

She said that repetitive exercises, such as the one in the game, can become boring to patients over time. Using virtual reality, themes can be adjusted and will hopefully hold interest longer.

Gras also said she was excited by the features to measure a person’s dizziness in the game, which consisted of buttons that a patient could use to rate his or her dizziness on a scale of one to 10.

Balogh and Hammel each developed their own early prototype of the game and learned VIVE’s entire coding program. By the end of the semester, both versions included a first level and were able to track head movements of users.

Before the students could work on developing the project, they both spent approximately a month teaching themselves the program through online data sources. Balogh said the latest version of coding was released only briefly before the start of the project.

Over the summer, junior Maily Ramirez and sophomore Anika Verma, both computer science majors, further developed the game during an eight-week program funded by the School of Humanities and Sciences. Since they were able to work on the project full-time during the program, they were able to make significant adjustments.

The adjustments included completely recoding the repetition counter, creating three levels with increasing difficulty, adding a user login and tracking the degree to which a patient could turn their head.

“I think we took [the game] at least one step further,” Verma said.

By the end of the summer, the project had reached an alpha model, meaning that it is functional and ready to be used in a study. However, since VIVE had just updated its game engine, the game must be reprogrammed first. Stansfield said that as soon as the game is reprogrammed, a pilot study will be launched.