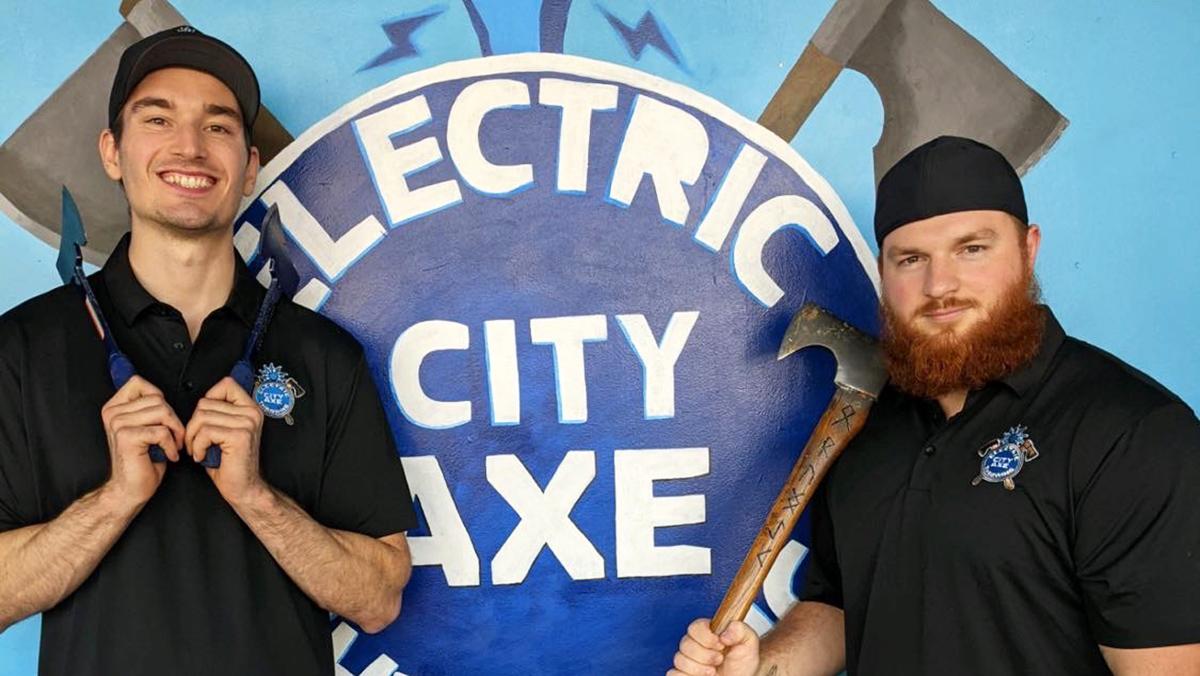 Courtesy of Sam Williams
Pictured is Senior Sam Williams (left), who is the co-owner of Electric City Axe Throwing, and the first employee of the business and Marine veteran, Chris Ogozaly.
By Caroline Grass — Staff Writer
Published: February 1, 2022

After taking two leaves of absence, an Ithaca College student is coming back to Ithaca as the co-owner of Electric City Axe Throwing, a business that draws people of all ages to spend a few hours launching axes at targets in Scranton, Pennsylvania.

Senior Sam Williams created his business plan in 2019 while attending the college and started working to turn his idea into a reality by taking time off school during the Spring 2021 and Fall 2021 semesters to work on opening his business in Scranton. Electric City Axe Throwing opened its doors July 31, 2021 and is Scranton’s first and only axe throwing range.

Williams, 27, served as a Marine Security guard for four years at the American embassies in Moscow, Russia; Podgorica, Montenegro; and Phnom Penh, Cambodia. He is now a Business Administration major with a concentration in Management and is set to graduate in December of 2022. He applied to Ithaca College after his contract with the Marines ended in May 2019.

Axe throwing as a sport is credited to Matt Wilson who made an indoor arena in Toronto, Canada in 2011, according to Afar Magazine. From there, the trend spread to bars in Philadelphia and Chicago in 2017. Now, there are places to throw axes all over the United States.

Williams is co-founder and co-owner of his business with fellow Marine Jose Bataller. Williams said the idea for the business came when he and Bataller visited their friend from the Marines, David Crawley, in Fredericksburg, Virginia, who owns an axe throwing business FXBG Axes. Williams said when he and Bataller were first thinking of locations for the business, Ithaca was the first place they had in mind. However, Ithaca’s low population and high tax rate in comparison to Scranton made the Electric City a better location for the business.

Ed Catto, instructor in the Department of Management, said he had first heard of Williams’ business idea during IC Demo Day, an event held every semester where students pitch startup ideas and business plans. Catto said he loved the axe throwing business idea.

“It’s such a cool business, right, it’s funky,” Catto said. “You know, he explained it really well and he had a lot of passion. And he really researched it.”

Senior Kyle Rouleau said he met Williams three years ago in a transfer class at the college. He said they became friends because of their shared background in the military. Rouleau served in the Army for four years.

Rouleau also has a business, Strong Oak Logistics, where he does home-based property management jobs. He said being a student and running a business is challenging but that there are many students who are entrepreneurs at the college.

“Being able to stay on top of your studies while managing a business is no easy feat, but if you’re disciplined it’s doable,” Rouleau said. “I think the more experience you get on your belt outside of school, the easier things are gonna be.

Patrick Keehan, business consultant at the Small Business Development Center at the University of Scranton, started working with Williams in February 2021 to get Electric City Axe Throwing started. The Center is part of a network of centers around the country that offer free programs and consultations to entrepreneurs looking to start a small business.

Keehan said he really liked the axe throwing business idea and thought more businesses targeting a younger crowd could be good for Scranton.

“I honestly thought it was a very fresh perspective to bring to the area, primarily in an area with a lot of older individuals staying here while the young population hasn’t really stayed here,” Keehan said.

Williams said that the center was one of the most helpful resources he had because it provided him with free consultations and helped him find resources.

“A lot of people are on social media every day, so it’s a really easy way for us to put up a couple of cool pictures or videos that look enticing,” Williams said. “We can put links right into our ads that people can click on and go straight to the website and make a reservation.”

“The nice part about [social media] is you can really gauge and understand how many people are looking at what you’re talking about,” Catto said.

Williams said Electric City Axe Throwing is starting to get a steady flow of customers since opening over the summer. He said he is coming back to Ithaca for the Spring 2022 semester and will earn his degree while having started a business during his time at Ithaca.

“I’m learning a lot and it was pretty cool to be able to see such a large project from start to finish and think that, you know, most of that work was done by myself and [Jose Bataller],” Williams said.