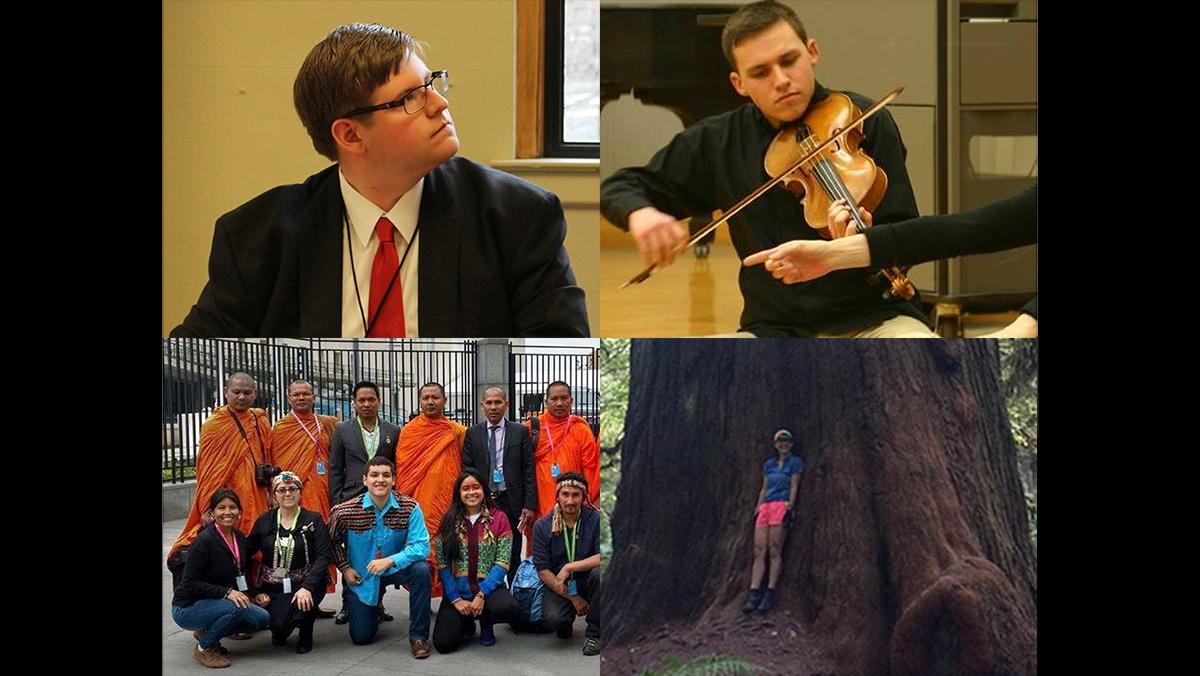 Three Ithaca College seniors and one alumna have been selected as 2017 Fulbright Scholar Program winners — the most Fulbright winners at the college to be awarded scholarships in one year.

The U.S. government–sponsored program provides the winners with grants to conduct research on topics of their choosing or to teach English in affiliated countries. The amount of money awarded is dependent on the type of research being done.

Cabisca was awarded a Fulbright scholarship to research the Bosnian crisis of 1908 and act as a teaching assistant in Vienna, Austria, next fall. Cabisca said he has always had a deep-seated interest in how the human experience has been shaped by certain events and that he would like to learn about how certain ideologies and cultures came to be. He also said that growing up in Erie, Pennsylvania, an area populated by refugees from the Bosnian crisis of the 1990s, led to his interest in the Balkans area.

“History is basically the story of humanity, and it reveals a lot about people,” Cabisca said. “That’s where most of my interest comes from: understanding people and how they change over time.”

During his time at the college, Cabisca said that he has participated in both the honors program and the School of Humanities and Sciences’ summer scholar program, for which he utilized archives in London to write a thesis paper on Britain’s views of Austria-Hungary that would later become the basis for his Fulbright application.

Cabisca said he originally wanted to look at the Austria-Hungary perspective of the issue for his thesis paper, but due to his limited language abilities, was not able. Cabisca said that now that he has taken four semesters of German and is planning to continue improving his language skills, as well as his knowledge on the Fraktur font, he feels comfortable revisiting his original topic of Austria-Hungary. In his research, he will be studying newspapers from the era prior to the annexation of Bosnia from the Austro-Hungarian Empire to explore the delicate balance of nationalities that existed in the Empire and compare that to modern–day Austria’s own issues with multiculturalism.

Stemming from his father’s work as a political observer, Rubin said he always had an affection for politics. In the 10th grade, Rubin said he decided to take up the viola and enjoyed it so much that he wanted to be a music education major in college. However, later in his college career, he said that he realized that his two loves were actually interrelated and that the college was the perfect place to explore the relationship between the two.

“Music and politics revolve around the same thing: society, shared aesthetics and cultures,” Rubin said. “I feel that the two influence each other. One way that you can approach this relationship is the musical, which is one of my defaults. We can’t actually play this music without understanding its context. We aren’t doing any worth to the composer, who is a human and not this abstract being that composed this, without looking at the political and cultural contexts.”

Rubin was awarded a Fulbright scholarship to study the work of the 20th-century Polish composer Henryk Górecki as a research fellow at the Polish Academy of Sciences and Institute of Art in Warsaw, Poland. The topic, Rubin said, developed during a conversation with Sara Haefeli, assistant professor in the Department of Music Theory, History and Composition, during which he was trying to combine his interest in 20th-century Soviet politics with the Polish repertoire of that era.

Rubin said he will be spending the first six to seven months of his stay in Warsaw brushing up on both the political and musical culture and history of the country. He said that following that, he will be traveling south to Górecki’s homeland in Katowice, Poland, to meet former students, family members and contemporaries of the composer.

López-Carmen is the first recipient of the newly added Western Sydney University Fulbright scholarship. He said he will be using the grant to study aboriginal and indigenous health issues in Australia, specifically in regard to the effects of boarding schools on the youth of these communities.

His interest in indigenous studies stems largely from his personal background. López-Carmen is an enrolled member of the Crow Creek Sioux Tribe and has Yaqui heritage on his mother’s side. He said an experience that particularly affected him happened when he was 13: While visiting his tribe in Mexico, he was severely burned on his leg and had to drive five hours to find a hospital due to a lack of resources in the area.

“I realized through that experience that the people in my tribe don’t have many options when it comes to serious injuries like what I experienced,” said López-Carmen. “I was able to leave because I was a U.S. citizen, so I could cross the border and obtain medicine that could help me. They do not have that option.”

López-Carmen said, the lack of public health resources is a common issue for Native Americans as well as indigenous communities worldwide. He attributes this to a number of problems, mainly revolving around preferences within tribal cultures, and on a larger scale, systematic oppression of indigenous people throughout history. He said that tribes also value their sovereignty and traditional practices. Though not necessarily an easy feat, Lopez-Carmen said he would like to bridge the existing gap between modern medicine and indigenous healing practices in a way that respects traditional culture.

Hugh Egan, professor in the Department of English who has twice been awarded a Fulbright award to teach abroad, said the college typically happens to have a few Fulbright winners every year, and that four students match the college’s all-time high for the number of students awarded a Fulbright in one year. He said students have used the funds to study topics ranging from invasive plant species in Trinidad to sacred music in Morocco.

Egan said that as for any advice he might have for scholarship winners, students should embrace the journey they are about to venture into.

“I’m hesitant to offer advice, but if I have any to give, it might be to expect the unexpected,” Egan said in an email. “Inevitably your project will not proceed precisely as you planned, and that can prove to be frustrating. You’ll get the most out of the experience by remaining flexible and allowing yourself plenty of time for the surprising (and rewarding) detours in this journey.”

Though the Fulbright Scholar Program faced major budget cuts last year, and may face more this year, Ithaca College’s program is seeing a rise in applications.