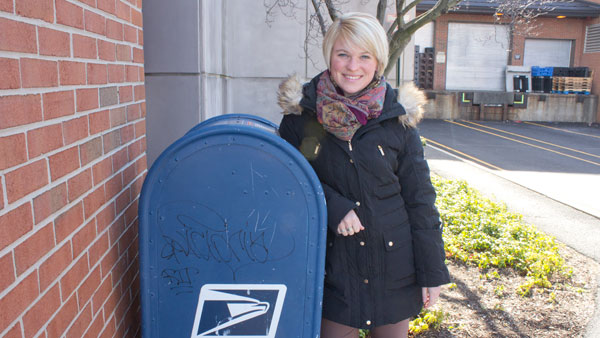 Sabrina Knight/The Ithacan
Bailey Reagan, administrative assistant to the president, is a campus cursive coordinator for The World Needs More Love Letters, a campaign that encourages people to send love and support around the world in the form of letters.
By The Ithacan
Published: November 20, 2013

“These words are to remind you that your new beginning is about to be the adventure of a lifetime filled with exciting stories, glorious tales and happy endings.”

Written in an anonymous letter, these words exemplify what The World Needs More Love Letters encourages. As a worldwide campaign to empower people through tangible acts of love, More Love Letters writes love letters, which are either left anonymously within a community for someone to find or sent specifically to strangers in need of love. There are more than 20,000 writers from about 49 countries including Canada, Australia and some in the U.K.

Anyone can submit a request on the More Love Letters website or through their social media platforms. Writers can read the background of a particular person and write him or her a letter to express encouragement and love by a certain time and date. Then the organization will send the person going through a tough time a package of all the letters written for him or her by More Love Letters’ writers.

“Writing is a way to show your emotions on paper, and a lot of people who can’t express their emotions do it in a letter, and that is what the ‘I was here’ campaign is all about — voicing the right now, the could be, what you really want to say but haven’t said it yet.”

The “I was here” campaign is one of two ongoing campaigns this month. The other is “Thankscripting,” which encourages college students to write a letter in the spirit of the holiday season, thanking anyone who may touch their lives — even in the smallest or most indirect ways.

Reagan first heard about More Love Letters in December 2011 when founder Hannah Brencher video-called the college’s chapter of Food For Thought, a campus organization of which Reagan’s roommate was a member. Upon leaving the Food For Thought event, Reagan’s roommate decided to tell her about More Love Letters because of her deep interest in writing letters, leaving notes and sending cards.

Sara Brink, also a campus cursive coordinator for More Love Letters, said she works with Reagan to mentor campus organizations, organize national campaigns, manage their active social media accounts and answer any questions sent to the organization by current or interested writers. Brink said she loves her job because it is fun and rewarding to be working with students from campuses all around the world.

“The letters that are the most impacting are the ones that others are sharing their stories, and they are reaching out to people that they have never met,” she said. “They are telling them something so personal about their lives that it’s so impacting, and it just makes you realize that there are people out there that are going through the same things you are.”

Several campus organizations and individuals are currently participating in the initiative or plan to begin soon. Junior Kaley Belval, president of She’s the First*{Ithaca}, said she has brought the idea to her club and will start writing the first round of love letters at the last meeting of the semester at 8 p.m. Dec. 12 in Friends 208.

Belval said she first heard of More Love Letters when she attended the She’s the First Leadership Summit for campus chapter leaders Aug. 9–11 in New York City, where one of the keynote speakers was Brecher. Coming back from that summit, Belval said she was inspired to bring More Love Letters to She’s the First*{Ithaca} because she thought the goals of both the campaign and her organization matched.

The goals of both organizations are to promote team building and sharing the idea of being a positive influencer on campus and to the world. Belval said writing letters is a good way for for students to talk about issues that She’s the First*{Ithaca} addresses other than their main focus, girls’ education.

“We, in this digital age, can leave something for someone else that can have a positive impact on their life, as well as showing that we did something in our lives.”

One of the key ideas Belval said More Love Letters promotes is that people can impact the world through more than raising money and donating it to charities. Sometimes people don’t realize that all they need is a little unexpected love, Belval said.

Brink said this movement has grown from a blog when she first got involved as a writer in 2011 to a worldwide initiative where she is given the opportunity to coordinate with writers of all ages.

“They go out of their way to spread this idea of love and acceptance and encouragement,” Brink said. “They basically just amaze me all the time. It really does enforce the idea that there are that many good people in the world.”