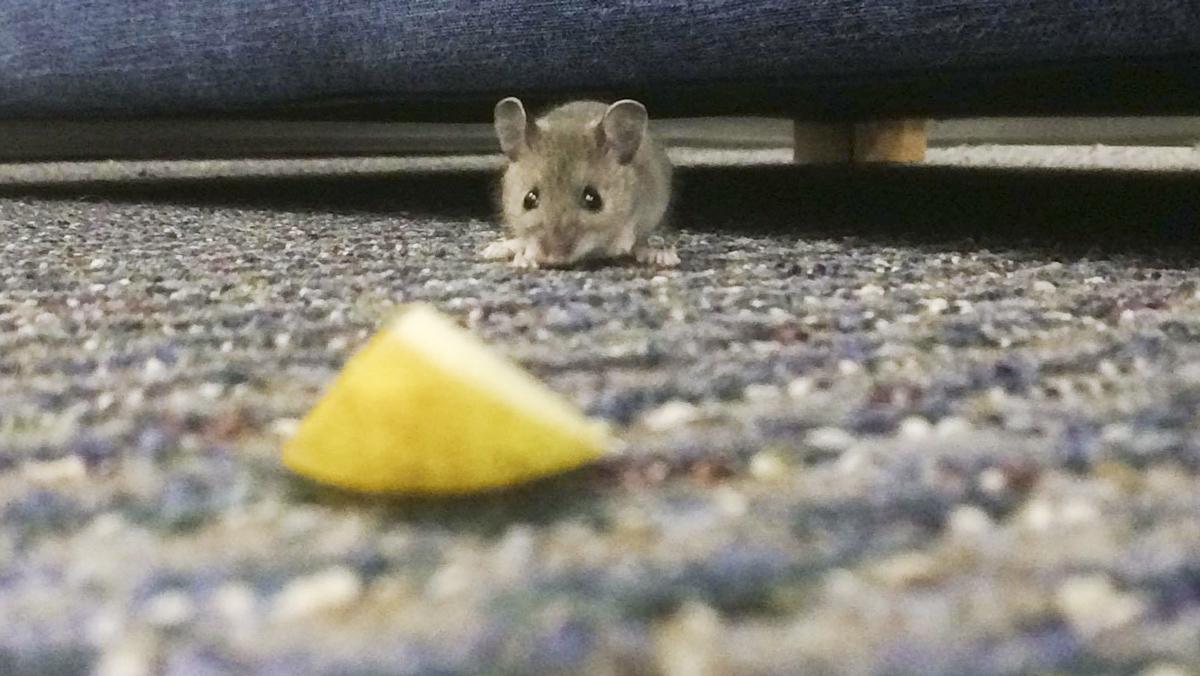 Courtesy of Jennifer Peisner
Some students reported finding mice in their dorms and elsewhere on campus during the past semester and over recent years at Ithaca College. Officials said it is not an uncommon occurrence in multiunit buildings.
By Olivia King — Staff Writer
Published: April 10, 2019

On April 6, Ithaca College freshman Bailey Becher saw a mouse run across her dorm room in the middle of the night. She lives on the fifth floor of East Tower and said she thought the mouse was moving between different rooms on her floor.

After seeing the mouse, she put loose food away and put a towel at the bottom of her door in an attempt to prevent the mouse from coming back in.

“I just did anything I could do to hopefully not have a mouse be in the room for very long,” she said. “I’m really scared of rodents being in my room because it’s extremely disgusting.”

Becher said she and her floormates called the Office of Public Safety and Emergency Management, but the responding officers were unable to find the mouse when they came. She said she heard of similar incidents in her building but noted that it was the first time she saw one in her room.

Other students have reported similar incidents in which they found mice in their dorms or on campus during the past semester and over recent years at the college. The Office of Facilities and Public Safety typically address these incidents. Ernie McClatchie, executive director of facilities, said it is not uncommon to receive complaints of mice in the residence halls when the cold weather sets in. Some students living in terraces have also reported having run-ins with flying squirrels.

“Rodent complaints predominantly occur when the weather turns cold and the rodents seek a warm shelter,” he said.

He said he does not believe this issue is abnormal in northeastern regions due to the cold weather that causes rodents to look for warmth and food. He said that having a campus located next to hundreds of acres of natural lands and an abundance of wildlife creates a high likelihood of interaction.

Samantha Hillson, director of health promotion at the Tompkins County Health Department, said mice can carry certain types of allergens and diseases that can pose significant health risks. She said it is hard to judge the situation at the college without assessing the rodent situation directly. She said students should take precautions and contact the appropriate officials on campus if they find mice in their rooms.

“It is certainly not uncommon for rodents to find their way into communal and multiunit buildings,” she said. “The main message is to encourage students to take appropriate steps to report any sightings of rodents and make sure that campus authorities can take the appropriate steps to address it.”

She also suggested that students store food, water and garbage properly and try to maintain a clean environment in their room.

For some, the furry encounters do not always frighten or disgust. Prior to spring break, freshman Jennifer Peisner caught a mouse in the ground floor lounge of East Tower using a dirty pot. Peisner said that a resident assistant in East Tower told her the mouse fell from the ceiling.

“I wasn’t fazed much when the mouse was found,” she said. “My immediate reaction was thinking how cute it was.”

This was not Peisner’s first interaction with rodents in residence halls. Prior to this incident, in Fall 2018, Peisner said that she and her friends saw a mouse scampering around the same lounge.

Sophomore Madeleine Rohan said that during the first week of classes of Fall 2018, she found a mouse in her room in Terrace 12. She said it climbed into a bin where she kept food and ate through most of a closed box of cookies.

Rohan said she was frustrated with the wait time because it was four more days the mouse could have been in her room. She said having mice where she lives makes her feel uneasy.

“I really don’t like mice and having them in my room makes me feel gross and uncomfortable,” she said, “Sometimes at night if I hear a rustling noise I get nervous that it’s another mouse, and it wakes me up.”

Junior Grace Doyle said that as an incoming freshman, she was warned from a post in a Facebook group not to live on the first floor of residence halls in the Lower Quad due to mice. Now, as a resident assistant, Doyle said she has had to deal with rodents with her residents for both years that she has had the job.

“Every year that I’ve been a student here, I’ve heard about someone who had a mouse in their room,” she said. “If it isn’t already a problem, it’s getting to be one.”

She said that during Fall 2017, she had three separate rooms on her floor call her because residents had seen mice in their rooms. She said that this year, her boss informed her that she had seen a mouse in a bathroom in Bogart Hall. She said she has also heard of incidents like these happening in other dorms as well.

“My concerns were general hygiene and food safety,” she said. “I think this was handled as best it could have been.”

During this academic year, freshman Megan Gibson said that she and her roommate caught four mice in their room in Tallcott Hall. She said they set traps and caught two during Fall 2018 and caught two more after winter break. She said she did not think this issue was isolated to her room.

“We are on the first floor, but I have friends on the third and second floor who have at least caught one mouse,” she said.

McClatchie said locations near the perimeter of campus, adjacent to forest, are normally impacted the most. He said this is because they are the buildings rodents live closest to, so they are the first locations they attempt to enter.

McClatchie said bait boxes are used on the exterior of the buildings to combat this issue. He also said holes on the exteriors of buildings are filled when identified to prevent access to the building. He said occupants are also asked to maintain a clean environment and keep food secure.

He said that in the event that rodents do enter a building and facilities is notified, there are licensed individuals on the team who can perform pest control.

He said the college contracts an outside pest control company, MRC pest control, and employs individuals within the grounds department to handle these issues. He said the pest control is on campus twice per week or more, if necessary. He said it is always the goal of maintenance to respond to requests as quickly as possible.

“I believe our process is normally very successful, and we are able to deal with issues in a relatively quick timeframe,” he said.

Students living in Terraces have recently complained about mice in their rooms.

Commentary: Pesticide use dangerous for produce