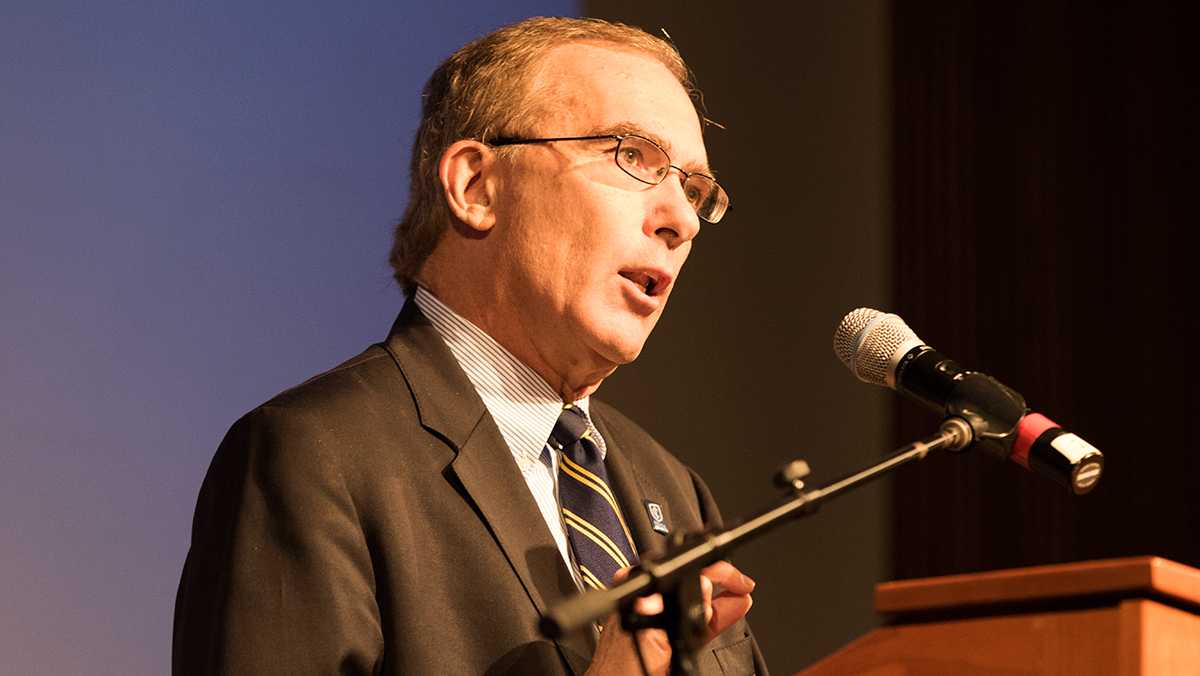 Ithaca College students involved with the POC at IC group handed out a document called “The Case Against Tom Rochon” to guests at several Family Weekend events around campus.

POC at IC stands for People of Color at Ithaca College. The group emerged about three weeks ago amid concerns about the college’s responses to a number of race-related incidents.

Though it is not clear where the document originated, the document is broken into seven sections of criticism toward Rochon’s presidency: “his autocratic leadership,” “his questionable ethics,” “his incompetence,” “his disregard for minority community members,” “his disconnection from what is actually happening at IC and what needs to happen,” “his hostility toward criticism” and “exceptionally low campus morale.”

At the time this article was published, David Maley, senior associate director of media relations, had not responded immediately to a request for comment by the administration about the document. At about 5:30 p.m., he provided the following statement in regards to the document:

“Ithaca College respects the rights of our students, faculty and staff to express their opinions and distribute information on any subject to the campus community,” Maley said. “This is an essential component of the discourse that ultimately will make IC the strongest institution possible. The issues facing Ithaca College are complex, and they deserve — and are receiving — the full attention of the president. He is focused on continuing to partner actively with students, faculty and staff to make IC the best it can be.”

At the start of the presidential address around 10:15 a.m., with approximately 400 people in attendance, Rochon addressed the potential for the meeting to be disrupted by protests.

“Before we begin, I would like to take a moment to recognize that there are important and passionate conversations and demonstrations going on on campus right now … and these include a particular focus on diversity and inclusion in our campus community as well as in the leadership itself,” Rochon said. “You are likely to encounter demonstrations this weekend as well as possibly at this meeting itself.”

Rochon said although the protesters’ way of addressing the issues could make the audience uncomfortable, the college wants to give voice to the students, and he welcomed students to come to the stage to speak. He said if students decided to take the stage, he would complete his address after they were finished.

Junior Kelli Kyle, operations manager for the Office of Campus Center and Event Services, said the event staff had crisis-team meetings about what to do in the event a demonstration disrupted the event.

“They didn’t tell us there was going to be a demonstration specifically, but we did have extra staff on board … just to ensure that if something did happen, people could exit in an orderly way and a safe way,” Kyle said.

Although no students took to the stage, members of POC at IC took advantage of the following Q&A session to ask Rochon questions in front of the audience.

Three POC at IC members asked Rochon questions. One student asked Rochon to address what should “restore any confidence” in him, to which Rochon responded that she should look at the opportunities of the future. In response to another question, Rochon elaborated on what happened at the Blue Sky Reimagining Kick-Off event Oct. 8 between panelists J. Christopher Burch ’76  and Tatiana Sy ’09 and explained to the audience that the Blue Sky initiatives have been postponed. A third student said Rochon should call Burch’s remarks at the Blue Sky event “racist” rather than “racially insensitive” and asked how the decision to cut 40 staff members will affect students. Rochon said the decision to cut staff positions came from an effort to make the college more cost effective.

Near the conclusion of the Q&A session, Christine McCue, the mother of a freshman at the college, said she thought the administration was doing a good job of being transparent with parents and was impressed with Rochon’s invitation to students to take the stage.

“As a parent who knew nothing about this, the communication that came out to us, I looked at that and said, ‘Wow, he’s being transparent with parents,’” McCue said after the event. “He’s being upfront and honest with all of us who are paying all this money for tuition.”

Alfred Del Grosso, another parent, said he wants to find out more about what happened at the Blue Sky kickoff event and the offensive language that was used by Burch toward Sy.

“I wish I knew more that this was going to come up when we were heading up here,” Del Grosso said.

The college included a message in folders given to Family Weekend guests that addressed the potential for demonstrations on campus and encouraged guests to listen to what students have to say.

The document states that the college will not try to prevent protests or demonstrations and encourages guests to go to http://ithaca.edu/diversity to learn about the college’s plans to address issues related to racism and cultural bias, as well as to attend discussion sessions with vice presidents at 1 and 3 p.m. in Textor 102.

Chris Biehn, vice president of institutional advancement and communication, said it is important for administrators to answer parents’ questions transparently.

“Because of all the activism on campus, it’s helpful for us to be available to answer any questions they may have,” Biehn said. “We want to continue the discussion.”

Biehn said he’s found that many parents are appreciative of this open communication about what’s going on at the college. He said the administration is continuing to try to improve the situation.

“The ability to make change is not as rapid as we would like it to be … but we’re trying to be transparent,” Biehn said.

This article has been updated to include a statement from David Maley, senior associate director of media relations.