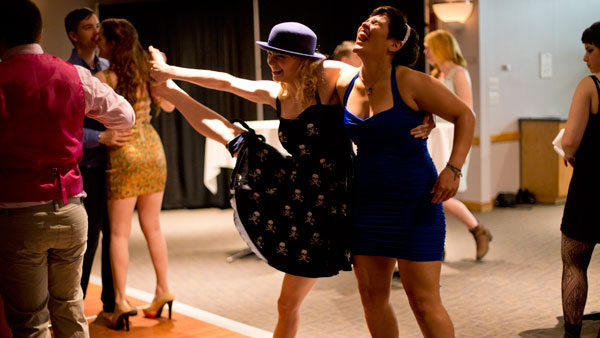 Prism, a student organization dedicated to queer issues and advocacy through the Ithaca College Center for LGBT Education, Outreach and Services, sponsored the LGBTQA Pride Prom, which was open to all students April 26 in the Clark Lounge in the Campus Center. Many other LGBTQ events have taken place in April and March such as the Finger Lakes Environmental Film Festival in which some of the films focused on LGBTQ issues, Prism’s drag show, as well as discussions with LGBT authors and film directors.

The Pride Prom featured a photographer to take prom pictures and a dance floor for guests donning semi-formal attire. The attendees danced to pop music from artists such as Kesha and Beyonce, played by junior disc jockey Nicole Friske, or DJ Fuzzy Bear.

Luca Maurer, education, outreach and services program director at the college’s LGBT Center, said Ben Jeffers ’12, previously a resident assistant in the LGBTQ living-learning community, helped establish Pride Prom at the college seven years ago with the LGBT Center. Maurer said they worked to get a dance started for people who may have felt uncomfortable at a regular prom in high school.

“Sometimes people may feel different about going to a dance where everybody else is heterosexual, or different if they want to dress in clothes not traditionally associated with their gender, and they want to feel like everyone is accepting and fits in,” Maurer said.

He said during LGBT Awareness Month at the college, the LGBT Center traditionally plans lectures, discussions and special events with learning opportunities that students of any sexual orientation would be interested in attending. This includes the Q&A with Filmmaker Eliza Greenwood and her colleague Connor Gillis on their film, “Austin Unbound,” a documentary about transgender people that took place April 7 in the Handwerker Gallery.

“There is something for everyone, whether specifically academically focused, focused on the arts, focused on things that are happening in the news or celebrating our community,” Maurer said.

Friske said the LGBTQ community on campus is very comforting, and its events shine light on taboo topics such as how families deal with LGBTQ issues.

“The LGBTQ community takes a lot of pride in being supportive and empathetic, and that is exactly how this family here on Ithaca College’s campus acts toward the student body,” Friske said.

Freshman Anne Tierney said she was glad people were able to attend Pride Prom with whomever they wished — an opportunity not everyone may have had in high school.

“I think a lot of LGBTQ youth still don’t get the chance to go to prom with their significant other, so I’m glad that this can be a chance in which some kids can do so,” Tierney said.

Freshman Devereux Katz said attending Pride Prom allowed him  to have a fun night with an on-campus group that he was able to connect to and encounter new people through.

“It presented a really good opportunity to relax and meet other people from the LGBT community of Ithaca,” he said. “I was happy about getting the chance to dance with so many other fun people in my community.”

Friske said Pride Prom went an hour past the planned end time of 9 p.m. Friske said she had a revelation that Ithaca’s LGBTQ community was a close family base that cared for one another.

“In those three hours spent watching people dance and mingle, I realized how much of a family the LGBTQ community has become, and we always make room for anyone,” Friske said.