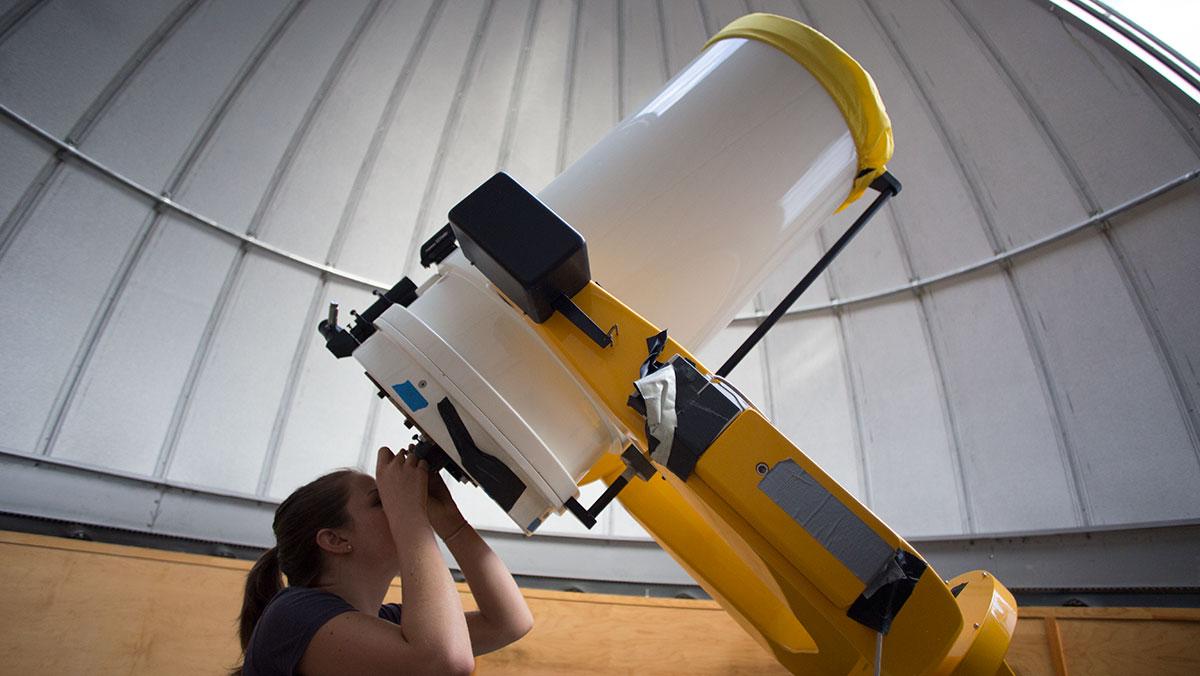 Tucker Mitchell/The Ithacan
Sophomore physics major Amy Parker looks through the telescope at the Ford Observatory on Oct. 7. The observatory is open to the public for viewings and tours 8–9 p.m. Friday nights throughout each academic semester.
By Mark Prowse — Contributing Writer
Published: October 8, 2014

Located deep in the natural lands at the south end of Ithaca College’s campus is a source of astronomical research opportunities for students and faculty alike, known as the Clinton Ford Observatory.

Daniel Briotta, associate professor in the Department of Physics and Astronomy, was responsible for proposing the observatory’s construction in 1997. He now oversees its upkeep and activity.

Owned and operated by the college’s physics department, the observatory began construction with contributions from the late trustee Clinton B. Ford and a grant from the National Science Foundation, Briotta said. The first official activity, known as “First Light,” occurred in September 1998.

Ford, Briotta said, was an amateur astronomer who served as treasurer and eventually president of the American Association of Variable Star Observers. Ford became a member of the Ithaca College Board of Trustees in 1966 and remained a member until his death in 1992.

Briotta said research at the observatory is and should continue to be initiated and undertaken by the students themselves with minimal guidance from professors.

Sophomore physics major Amy Parker is currently conducting research at the observatory concerning contact binary star systems — pairs of stars that orbit one another so closely that they trade matter with one another as if they are touching. She works alongside Briotta in collecting data from these systems that can be used to build accurate models of their features and behavior. She said research at the observatory is largely open-ended and almost entirely student-run.

“The thing I really like about working with Dan Briotta is that he lets you take whatever direction you want with the current research,” Parker said.

Observations are clearer and more accurate in the winter because of the cold weather, which allows for less atmospheric distortion, she said.

“A lot of the time that I spend at the observatory is dependent on the weather,” Parker said. “During the week I spend at least three hours a week there, but in the winter we’ll usually be up there two or three nights a week.”

Although the official name of the department includes astronomy, there is currently no degree for astronomy being offered at the college. However, Briotta said he hopes that with outreach and increased interest, a program can be developed in the near future.

“We have to demonstrate that there would be enough support and enough students to make adding an astronomy major viable,” Briotta said. “We’re still getting started on that. We’re trying to add small things and small steps toward getting a minor started, because that’s relatively easy to do.”

He said the observatory is equipped with a powerful 16-inch digital telescope that allows for deep, clear and detailed observations.

“With a cooled digital camera on the telescope, I can see things that, if we used film, would require a 60- or 70-inch telescope,” Briotta said. “That makes it really powerful, because we can actually do real research with our students here.

Also at the observatory is a radio telescope, constructed four years ago as a student research initiative, Briotta said.

Matt Price, assistant professor in the Department of Physics and Astronomy, is currently involved in developing the radio telescope at the observatory. The telescope picks up electromagnetic waves outside the visible spectrum of light in order to collect other forms of astronomical data.

“We’re looking at the night sky in radio waves, which is just a different wavelength of light coming from the universe,” Price said.

He said he believes that observing more wavelengths of light, in addition to the optical spectrum, allows for a more complete representation of objects in the night sky.

As the radio telescope is still in its developing phases, measurements are difficult to turn into useable data, he said. Right now, the telescope is fixed at one point in the sky, but motion controls that allow for a more complete gathering of data are currently in the works.

“If you want to get involved, all you have to do is come talk to me,” he said.

The observatory is open for public observations and tours from 8–10 p.m. Friday nights throughout each academic semester. The two tentative dates for the fall semester are Nov. 7 and Dec. 5. Shuttle pick-ups run from two locations: in front of Smiddy Hall and in the F-Lot side of the Center for Health Sciences.