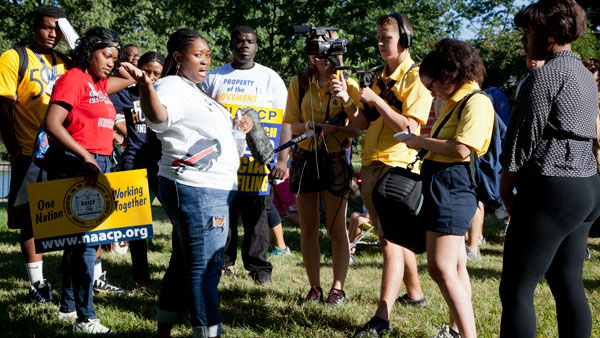 Fifty years ago, college students played a central role in organizing one of the largest marches for jobs and freedom of the civil rights era. This year, college students — 13 of whom were student journalists from Ithaca College —  were involved again, covering the anniversary of the march.

Students teamed up with “NBC Nightly News” to document the 50th Anniversary March on Washington on Saturday, days before the Aug. 28 anniversary of the original march. Participants in the original 1963 March on Washington for Jobs and Freedom reunited on the National Mall and stood alongside younger generations to commemorate the march and continue the fight for jobs and freedom.

James Rada, associate professor of journalism, organized the project shortly after some students from the Roy H. Park School of Communications helped produce his documentary “Meet Me At Equality: The People’s March on Washington,” in the spring. He coordinated with NBC to form a contract that would allow students to work as freelance reporters. Rada said this was the first time a major news network has worked with a group of college students for a national event.

Saturday’s march was sponsored by the National Action Network, Martin Luther King III and the NAACP. It was the main event in a weeklong series honoring the semicentennial of the march. The celebratory events began Aug. 17 and ended Wednesday with a closing ceremony led by President Barack Obama. Former presidents Jimmy Carter and Bill Clinton were also present.

Five other students from the Park School went to Washington to cover the closing ceremonies for PBS News Hour. The students were live-tweeting from the event and shot interviews and B-roll for two videos they edited and produced for PBS. Many people who marched 50 years ago and returned for the ceremony were excited to hear the first black president speak, the student team reported.

Saturday’s event opened with featured speakers, including the Rev. Al Sharpton; Attorney General Eric Holder; Cory Booker, mayor of Newark, N.J.; and Rep. John Lewis, D-Ga. They spoke from the steps of the Lincoln Memorial, where Dr. Martin Luther King Jr. gave his “I Have A Dream” speech 50 years ago and preached a similar message about uniting for equality.

In 1963, women’s voices were not dominant at the march — men had to speak on their behalf. Fifty years later, women were able to speak for themselves. Nearly half the speakers at the event were women.

Rep. John Lewis, D-Ga., reminded participants of the progress America has made toward equality for all since the original March, and the work remaining in the civil rights struggle.

One of the participants expressed similar sentiments in her interview. Carrie Jackson, a young veteran from Virginia who marched alongside her mother and in honor of her father, echoed Lewis’s call for action.

“When I looked back at Dr. King’s speech, he had said that he had come to the steps of the Lincoln to cash a check and that he didn’t believe that the government was bankrupt,” Jackson said. “It’s one thing to write a check and to cash it, it’s another thing on what you do with the funds you receive once you’ve cashed it. We’ve grown complacent. It’s not like those funds aren’t there, we just aren’t using those funds to continue out the dream.”

Weaving among the crowds and fighting the heat, the students coordinated meetup times and locations to give NBC footage of their assignments. Kyle Robertson, a senior journalism major and news director of WICB, said interviewing event participants was an exciting challenge.

“I’ve been part of large events as a participant, but media coverage was a very different story,” Robertson said. “We were running around all the time, things change at the last minute, you really have to roll with the punches. I think we did a good job overall, but it was definitely one of the craziest days I’ve ever experienced being a student journalist, but also one of the most rewarding.”

Janelle Richards, associate producer of “NBC Nightly News,” said the student team’s flexibility helped the network gather more content at a faster speed to cover an event of this magnitude.

“It was nice to see students that were really upbeat but also really talented and take direction in an environment that was really busy and filled with a lot of people,” she said.

John Shuter, a resident of Ithaca, was 18 years old when he marched in 1963. Shuter said he was inspired to march after learning for the first time about the structures of racism and poverty in the United States at a work camp sponsored by the American Friends Service Committee, a Quaker organization that promotes peace and justice.

“The March gave me a sense of being part of something huge, that this was not only a huge problem, but there were a large number of people trying to find solutions and to create a more just society,” he said.

Shuter also said the structural racism of the past that infuriated him to take action in 1963 is still powerfully alive in today’s policies.

“The post-war policies of the Federal Housing Administration, which provided loans to white families and explicitly excluded blacks from receiving those loans … have sustained and intensified the wealth gap between white and colored people,” he said. “That’s why this March is not just a commemoration of what happened in 1963. I hope it’s a rededication for a lot of people to dealing with the issues that are here now.”

At the end of both Saturday and Wednesday’s events, Representative John Lewis, D-Ga., fired up the crowd by leading a chant, calling on participants to take action in order to propel the nation to the state of equality it had hoped for 50 years ago.

“We come here to commemorate, we go home to agitate,” Lewis said.

Megan Devlin participated in the student coverage of the 50th Anniversary March on Washington.