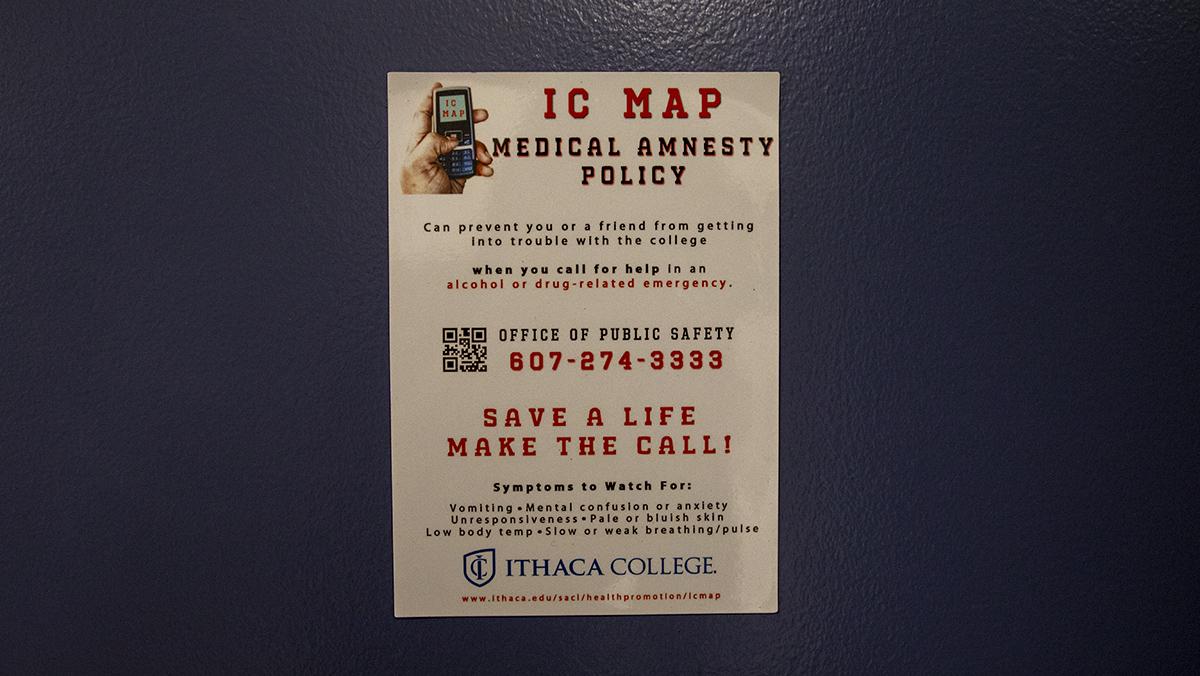 Grace Vanderveer/The Ithacan
The Medical Amnesty Policy was created in Fall 2010 and the policy is advertised through magnets posted on the doors of residence hall rooms, floor meetings between students and their Resident Assistant (RA) and student orientation.
By Aubren Villasenor — Contributing Writer
Published: September 28, 2022

Confusion about Ithaca College’s Medical Amnesty Policy (MAP) has caused some students to call for clarity.

According to the college, the MAP allows students who suffer a medical emergency as a result of drugs or alcohol to not face drug or alcohol related sanctions; the student that calls for help is also protected under the policy. According to Students for Sensible Drug Policy, MAP at Ithaca College is similar to policies at other colleges and universities in the United States. The MAP was created in Fall 2010 and the policy is advertised through floor meetings between students and their Resident Assistant (RA), student orientation and magnets posted on doors of the residence hall rooms.

Some students are confused about the specifics of the policy. First-year student Anita Preuss, who said she was recently involved in a situation with the MAP because a friend needed help, said she wished there was more clarity in the college’s messaging about the details of the MAP. Preuss said responders gave conflicting accounts of whether or not she and her friend would qualify for medical amnesty and said she was not aware that the responding RA did not request medical amnesty when they called the Office of Public Safety and Emergency Management.

“The [resident assistant] told [my friends and I] that, because we ourselves called the [Office of Public Safety and Emergency Management], we could not request medical amnesty,” Preuss said. “That was misleading because [the RA] offered to call public safety [after we called the RA].”

Katie Newcomb, assistant director for the Office of Student Conduct and Community Standards (SCC), said incidents are evaluated after they happen by SCC to determine if they qualify for the MAP and this is the only way students can be granted medical amnesty. When a medical emergency occurs, responders collect information regarding the situation that is then turned over to SCC to be evaluated for qualification for the MAP after the incident.

“I think there’s sometimes a lot of confusion because at the onset of handling a situation, it gets handled the same as any other situation,” Newcomb said.

Magnets posted on the doors of the college’s dorm rooms do not clarify that students must be approved for medical amnesty following an incident. Instead, these resources only inform students that the MAP can help them avoid consequences for drug or alcohol use in a medical emergency.

Junior Apartment Assistant (AA) Emma Commisso said that the intense workload of RAs and AAs can lead to confusion, like in Preuss’ situation, and can be part of why resident assistants are sometimes unclear about who grants the MAP.

“RAs [and AAs] definitely become confused because there is just so much information that you receive during training, and it can be hard to remember it all,” Commisso said.

Junior Violet Van Buren, RA and Student Auxiliary Safety Patrol employee, said she frequently deals with frustration from students regarding the MAP and this can make it difficult to encourage residents to call for help.

“I’ve got no power, really,” Van Buren said. “I’m trying to help these people who might not want that help because if they go through the process, they might be written up and I can’t just tell them safely, ‘Hey, go get medical help — it doesn’t matter.’ That’s always what I say in the end … but it’s tough.”

Van Buren said most cases under the MAP are approved by the SCC if students do not have other violations of the student conduct code on their record. Every case that involves the MAP is reviewed independently, but previous incidents will be taken into consideration.

“If you apply for medical amnesty every single week, there’s a difference between if you’re calling once for your friend and this is the first time it’s happened,” Van Buren said. “It’s always judged by student conduct and stuff like that, so it’s not necessarily true that you’re gonna get it every single time.”

Newcomb said the policy only protects students from alcohol or drug related violations, even if other SCC violations happened as a result of alcohol and drug use.

“If a student, [for example], physically harms a student while intoxicated, [while] that student may qualify for medical amnesty for alcohol–related violations, they will still be charged for the physical altercation,” Newcomb said.

Newcomb said SCC advertises the policy through social media posts and messaging from the Office of Residential Life to avoid confusion.

Newcomb said another goal for MAP is to make sure students have access to resources for alcohol and drug safety. Students granted medical amnesty will have to complete a Balancing Alcohol and Substance Usage to Improve College Success (BASICS) course or other educational training in a timely manner. BASICS is a course run by the Center for Health Promotion and students enrolled meet with a health promotion specialist to discuss drug and alcohol usage.

“If [students] are having an incident where they’ve consumed enough [substances] to the point that they need medical assistance, to us, that speaks of a larger issue,” Newcomb said. “We want to make sure that students get the help they need.”

Some students still have frustration about the execution of the policy. Preuss said that while she is grateful for the policy, she feels misled on the way the MAP works and said the college could better educate students on the policy.

“[The college] was like, ‘our priority is the safety of your friends, so we want you to call, no matter what, and the medical amnesty will cover everything,’” Preuss said. “So we had the impression that it covered everyone [and] I think they need to be more specific, even if it makes themselves look bad.”

Based on the medical amnesty policy recently implemented at Ithaca College, students under the influence of drugs or alcohol who call public safety for help receive no guarantee they will not be referred for alcohol and drug violations.