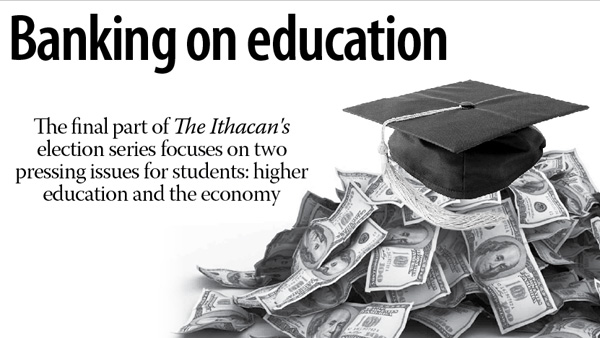 For students at Ithaca College and across the nation, finding jobs after graduation and paying for their education are top priorities this election. Most young voters rank the budget and economy as the main issues of concern, according to a poll by the Center for Information and Research on Civic Learning at Tufts University.

Senior Rob Flaherty, president of IC Democrats, said concerns about the rising cost of higher education makes student debt one of the most important issues for students during this election.

“In terms of access to education, the president’s record stands up against the Republican party’s aggressive cuts that are going to cause a lot of harm to college students moving forward,” he said. “We really need to be supporting officials who are going to work to alleviate the pain people are going through to finance their educations.”

Since Obama took office in 2008, he has supported federal aid programs and increased both the number of Federal Pell Grants available and the number of students who are eligible to receive the aid. To counter the rising cost of supplying American students with Pell Grants and federal loans, the Obama Administration advocates for cutting smaller student benefits. These include some student loan interest subsidies that allow the government to pay a student’s interest on subsidized student loans, one of the main forms of financial aid available to college students.

Maria Ferguson, executive director of the Center on Education Policy, said so far Romney’s plans for federal education spending are more vague than Obama’s, because Obama has a record of voting on education issues during his time in office, though Romney’s Five-Point Budget Plan aims to provide Americans with resources to seek higher education and gain job skills. Romney’s vice presidential running mate, Paul Ryan, is the chair of the House Budget Community and produced an in-depth federal budget that supports reducing government spending by limiting the number of Pell Grants available to students and targeting aid to students who need it the most. 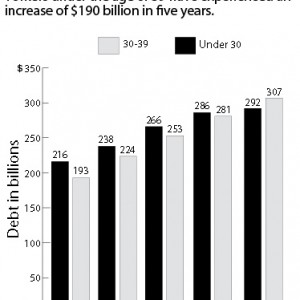 Senior Robert Oliver, president of IC Republicans, said members of IC Republicans have different opinions about how much, if any, money the federal government should give students to aid tuition costs because individuals in the group adhere to different political ideologies. Despite concern about college costs, he said he supports Romney and believes the government should not make more federal funds available to students.

“We honestly don’t have the money to increase them at this time,” he said. “We need to reform our budget, and we need to balance our budget, and so I do stand with Mitt Romney on balancing the budget being a high priority.”

Nicole Woo, director of domestic policy for the Center for Economic and Policy Research, a progressive economic policy think-tank based in Washington, D.C., said the economy has grown since the economic recession in 2008, but the American economy is stalled, meaning the number of jobs is not growing as much as the population is.

“You’ll hear different philosophies or different trains of thought in economics, and the main thing to remember is that when you’re in a stalled economy, the rules are different,” she said.

In this type of economy, Woo said, it’s important for the government to invest in schools and infrastructure because wealthier people are less likely to spend money in an economy that’s not growing. With increased federal spending, government employees, like teachers, will continue to have jobs.

“The most important thing is that our economy needs to grow, and if our economy grows, that’s the best way to deal with deficit, getting people back to work,” she said.

Oliver said the economy is one of the most prevalent issues for IC Republicans. He supports Romney because balancing the budget is one of the his campaign’s top priorities, and Obama has not done enough to build the economy.

“[Obama] doesn’t have the record to run on when it comes to the economy,” he said. “Especially since his stimulus package did not work, we’re not under 6.5 percent unemployment, and there’s a record number of people on food stamps.”

Oliver said Romney would create a freer market and more energy through more drilling and natural gas, which are initiatives IC Republicans supports.

Flaherty said Obama has made job growth one of his top priorities while in office and has made gains on bringing jobs to Americans. Flaherty said it’s important for young people to re-elect Obama so he can continue building the economy.

“I’m a senior myself, and that’s why I’m so strongly supporting the president this time,” he said. “I’m concerned about what comes next, and I want to be sure the person in the Oval Office is looking out for me.”

Ferguson said paying for college has dominated discourse on higher education in the past few years, and the election has sparked debate about how the student Pell Grant Program will be funded.

“My advice would be to educate yourself about the federal and state roles, depending on where your college is, in terms of how college is supported, and determine if you have an opinion about that and vote accordingly,” she said.

The full impact of Hurricane Sandy remains indeterminate. While most experts agree the effects on the Nov. 6 election will not be drastic, the campaigns of Gov. Mitt Romney and President Barack Obama definitely took a hit.

Both campaigns were blown off course this week before Sandy even made landfall. With both candidates scheduled to stop in highly contested Virginia, a wrench was thrown into their plans. Romney re-routed through Ohio, and Obama called off all scheduled stops to monitor the storm from Washington.

Both were strategic decisions. Romney left politics on the back burner and stood behind the president’s relief efforts. Obama needs these efforts to run efficiently, or he could face a legacy similar to George W. Bush when Hurricane Katrina relief catastrophically failed.

While the incumbent will undoubtedly be under the gun, the real issue might be voter turnout, as storm-affected areas could see depressed numbers at the polls. Those left homeless or without any means of transportation to the polls may very well not turn out. Both candidates could be affected, Obama in the coastal, democratic-leaning areas, and Romney in more inland, Republican-leaning areas. 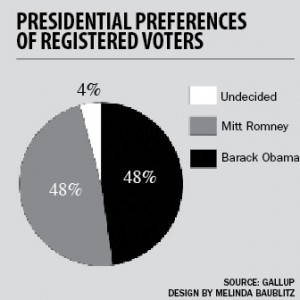 With many forced closures of voting stations and postal delivery stifled, early and absentee ballot voting have also taken a hit. While this is unlikely to change overall Electoral College numbers, low voter turnout could affect the national popular vote in the aftermath of Sandy. Initially thought of as unlikely, the chances of seeing one candidate win the popular vote and the other the election have increased.

This could be a long, painstaking election night, folks.

newsStudents focus on higher education and the economy this election