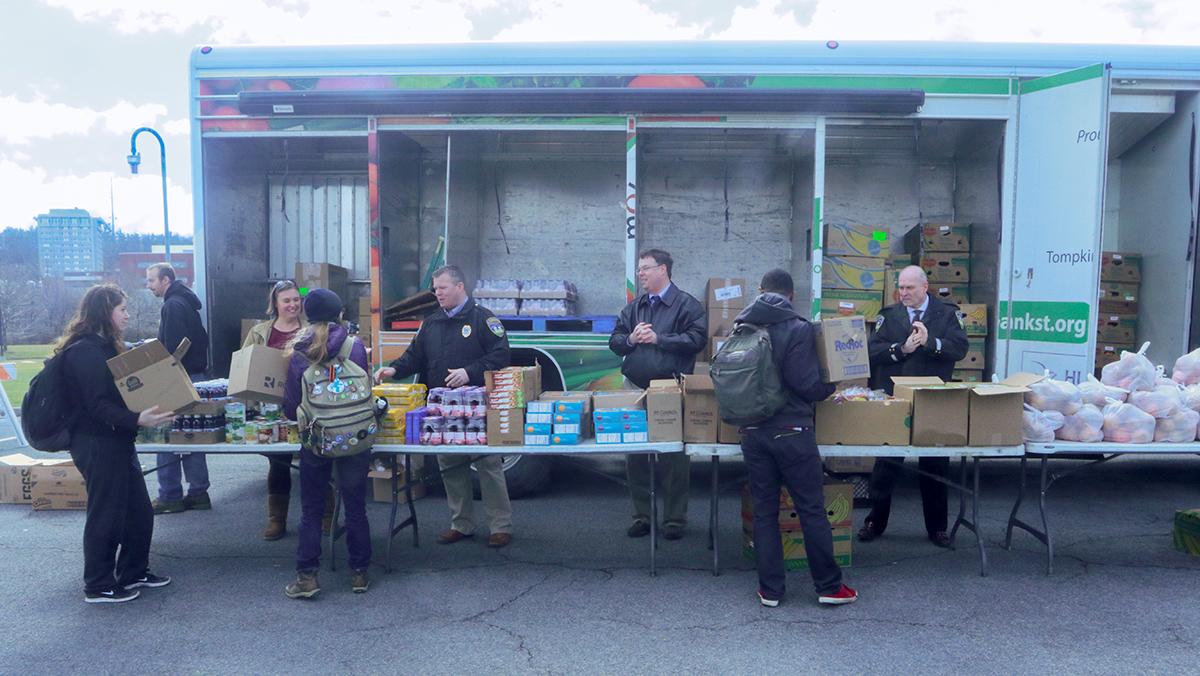 Maxine Hansford/The Ithacan
Students collecting food from the Mobile Food Pantry being distributed by members of Public Safety and other volunteers on March 29. The pantry will also be at the college during the noon hour April 7 and May 3.
By Steph Siok — Staff Writer
Published: March 29, 2017

Ithaca College partnered with the Food Bank of the Southern Tier to bring a mobile food bank to the campus community March 29.

The Mobile Food Pantry truck was set up in N-Lot near the Lower Allen Field. Tables were set up around the truck with produce, dairy, and other grocery foods, as well as boxes to transport the food. The pantry will also be at the college during the noon hour April 7 and May 3.

The purpose of bringing the food pantry to campus was to bring to light a nationwide trend of food insecurity on college campuses, said David Prunty, executive director of auxiliary services at the college and one of the main organizers of the pantry. According to Students Against Hunger, a joint report by the College and University Food Bank Alliance and three other groups, 43 percent of four-year-college students reported being food insecure, despite being on a meal plan, in October 2016.

Prunty said this nationwide trend is found at the college.

“A number of different faculty and staff across campus identified that there might be a need on our campus, and we’ve also heard about conversations starting across the country about institutions trying to address food insecurity,” he said. “We are trying to find a solution that would work for our campus.”

Sophomore Greg Lee said he feels there is a need for food pantries on any campus, not just Ithaca College’s. He said he is on a budget and normally likes to grocery shop but does not have the extra money to do so at the moment.

“There’s definitely a lot of people who don’t have access, don’t have the money to get all the food they need or want — I mean, that’s why I’m here,” he said.

Lee said he mainly eats at the dining halls but that they often do not have options he likes.

“SubConnect and the other places on campus where you can buy food are pretty expensive, so I guess this is a pretty good alternative,” he said.

Sophomore Anna Gardner said she first questioned why the college was inviting the Mobile Food Pantry but that she then began to understand that everyone is eligible.

“Outside of my meal plan, I don’t actually pay for groceries. I don’t have a lot of money in my budget to do that, so as far as food outside of the two meals allotted from my meal plan per day, I’m actually not buying those because of money constraints,” she said.

Gardner said the pantry is an opportunity for students to get foods that normally are not in their diets because of cost.

“I think there’s a lot of different opportunities for students, no matter what your socioeconomic class is, or if you’re on or off campus,” she said. “I think it’s really beneficial to everyone in the community.”

Carlie McClinsey, sophomore and student volunteer at the pantry, works as a liaison to the Office of Public Safety and Emergency Management through the Student Governance Council, where she serves on the executive board and as the Senate chair. She said the SGC thought it would be a great idea to volunteer for a few hours and hand out food.

“We want to make sure people on campus are being well–fed and are getting the support of Public Safety and SGC,” she said.

McClinsey said that despite the idea that Ithaca College’s student body is of a predominantly wealthier demographic, there is still a large population of students that might not have the financial means to buy extra food. She also said the pantry helps support students who have cut their meal plan and are tightening their budgets.

“As much as the dining hall does provide some really great food, I think a lot of times, there are students that live off campus or in Gardens who cut their meal plan to save some more money, so they don’t get as much food as they usually can,” she said.

She said the pantry should feel like a judgment-free zone, where anyone can come pick up food.

The Ithaca College community donated 120 pounds of food last Wednesday for Cans Across America, a nationwide, one-day-long initiative to stop hunger. The college, which donated the food it collected to a local food pantry, increased its donations by 15 percent from last year. Senior Melissa Horowitz, who works as the marketing intern for Ithaca…