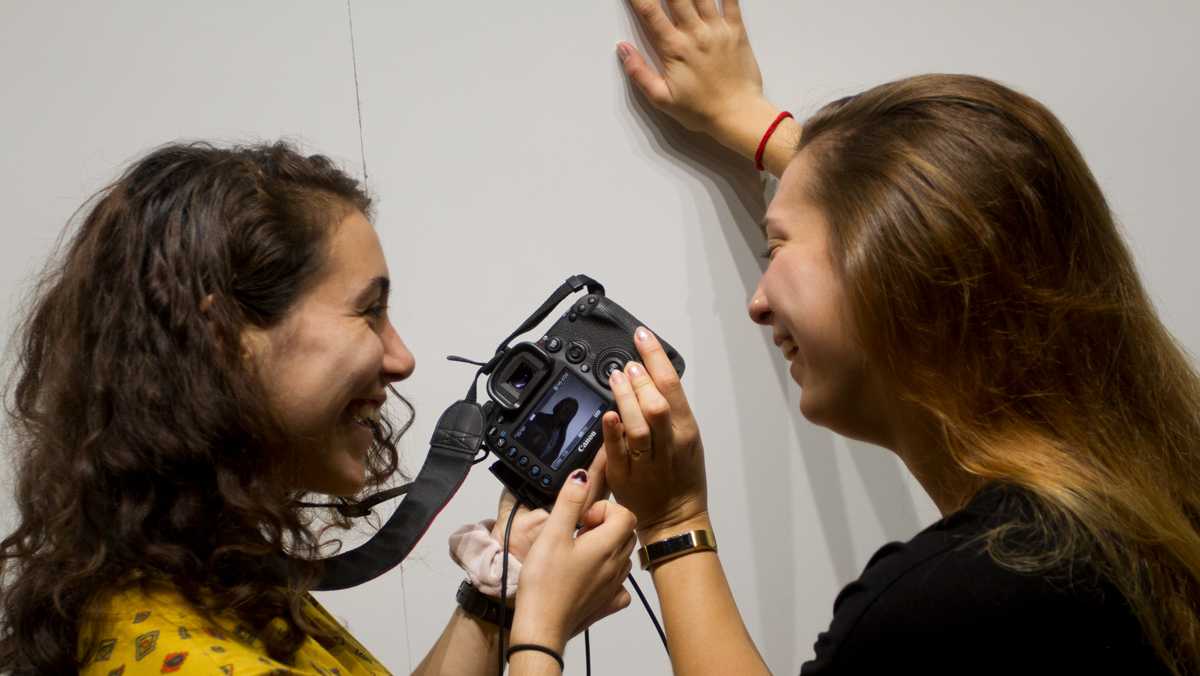 Maxine Hansford/ The Ithacan
Junior Sam Fuller and senior Yana Mazurkevich looked over photos taken at their Hurricane Irma headshot fundraiser. The two held an event where students could pay $5 to have their headshots taken. Fuller and Mazurkevich raised $270 for GlobalGiving, a nonprofit which is hosting a Hurricane Harvey and Irma relief fund.
By Phoebe Harms — Contributing Writer
Published: September 27, 2017

Thousands of people in Texas, Florida, Puerto Rico and the Caribbean have been displaced by hurricanes Harvey and Irma, and Ithaca College students are among those affected. Students at the college are raising money by hosting fundraisers to help their classmates.

Hurricanes Irma and Harvey have caused a predicted $290 billion in damage, according to AccuWeather. There are about a dozen students from the Houston area at the college, David Maley, senior associate director of media and community relations, said. However, he said he did not know how many are from the affected areas in Florida, Puerto Rico and the Caribbean. These students were on campus during the time of the storm, so while they were not present for the storm, their families and homes have suffered.

Students have organized and hosted open mic nights, benefit concerts and photo shoots and successfully raised money which will be donated to various organizations.

A group of theater students hosted “Hearts for Harvey,” an open–mic fundraiser on Sept. 17 in the Dillingham Center. The group had participants sign up online and asked everyone who attended to donate what they could. Nearly $200 was raised that night, and donations are still being received, sophomore Isobel Duncan, one of the hosts, said. Freshman Samkit Siyal, sophomore Kayla Owen, sophomore Audrey Lang, junior Ashley Karolys and freshman Amanda Erickson also hosted the event. Duncan said the money will be donated to the Cantor Fitzgerald Relief Fund for Hurricane Harvey.

Duncan said Karolys, who was from the affected Houston area, shared photos of her home after it was hit by Harvey, which made the event more meaningful.

“She had family affected by Hurricane Harvey and put together a slideshow of before and after pictures of Houston,” Duncan said. “She also told us some stories of people she knew who were affected. It was a really cool thing to add to the event.”

The group would like to start an open mic benefit concert series where it hosts more monthly open mics and donates the proceeds to different relief funds. Duncan said she and the group are already planning a “Hearts for Irma” concert which will take place 7 p.m. on Oct. 15 in studio one in the Dillingham Center.

Sophomore Andrew Hallenberg is from Fort Lauderdale, Florida, and said being away from home during this time was nerve-wracking.

“This is the first time I’ve been away for a major hurricane, so I get really nervous seeing news headlines that say things like ‘catastrophic,’” Hallenberg said. “Then I see Twitter, and it’s filled with information that isn’t even true. I just don’t know what to believe.”

Hallenberg said he was impressed with the efforts students had been talking to help those affected by the storms.

“These natural disasters aren’t necessarily events that affect everyone, but to see people who weren’t really affected at all coming together to provide relief to those who were really impacted in a horrible way is a great thing to see,” Hallenberg said.

The college has made efforts to extend its support toward students affected by the hurricanes and the magnitude 7.1 earthquake that hit Mexico Sept. 19. Bonnie Prunty, director of Residential Life and Judicial Affairs and assistant dean for first-year experiences, sent out a message via email and Intercom to all students to inform them the college will assist them by offering resources of support like counseling services.

Junior Sam Fuller and senior Yana Mazurkevich hosted a Hurricane Irma headshot fundraiser. The two set up an event on Facebook and had people sign up to get their headshots taken for $5. The event lasted over the span of a few days and raised $270, which will all be donated to GlobalGiving, a nonprofit which is hosting a Hurricane Harvey and Irma relief fund. Fuller said she was excited she could find a way to help with relief by doing something she loved.

“I was thinking that I wanted to help, but I couldn’t go there and volunteer, and I can’t just donate a bunch of money,” Fuller said. “So, I thought of what skills I had, and realized I could use my photography to help raise money.”

Harrison Lindsay, a graduate student at the college, performed at the Houston Benefit Concert at The Range Sept. 13. Under his performing name, Hal Guitarist, Lindsay performed a short set of folk tunes at the show and said that he changed some of the lyrics in the songs to be about Houston. The event was organized by Houston native and local performing artist Vee Da Bee, who gathered local musicians together for a show and asked attendees for donations. More than $800 was raised for the JJ Watts Foundation, an organization that helps youth in the affected Houston area, Lindsay said. There will be a second concert Sept. 27 at The Haunt for the same benefit.

Fuller and Mazurkevich are both photographers for The Ithacan.

A group of Ithaca College students has signed up to spend its fall break helping restore homes lost to Hurricane Irene in Prattsville, N.Y. The Scoharie County town was devastated by the flood in August, losing 40 to 50 percent of its homes. As a result of the destruction, the Huntersfield Christian Training Center in…

More than 120 students have filed to move in early to Ithaca College as of today as the East Coast braces for Hurricane Irene, a Category 3 storm gaining power and momentum in the Caribbean.