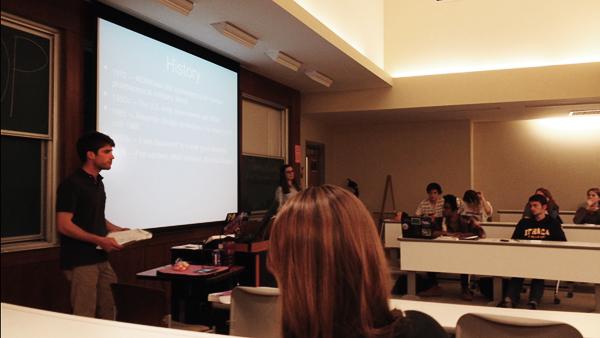 Courtesy of Evan Nison
From left, Charlie Diebolt speaks about the history of Ecstasy during the kickoff of the “Just Say Know” initiative Oct. 24.
By Noreyana Fernando — Staff Writer
Published: November 1, 2012

Students for Sensible Drug Policy and the Center for Health Promotion at Ithaca College has kicked off the first in a series of monthly discussions aimed at educating students about safe drug use.

The first session, which was held Oct. 24, focused on the drug MDMA, also known as Ecstasy, and is part of a series titled “Just Say Know.” The name plays off the 1980s “Just Say No” initiative that then-first lady Nancy Reagan began.

While “Just Say No” encouraged people then to stop using drugs, Evan Nison, president of the college’s chapter of SSDP, said “Just Say Know” seeks to promote healthy discussion about drug use instead.

“We know people are going to be using drugs, regardless of what we tell them,” he said. “But we should at least be having honest conversation and help them reduce the harm of that drug use if they choose to do so.”

Nearly 40 students attended the session and contributed to the discussion using a clicker system for anonymity. However, some topics, such as drug jargon, were openly discussed.

Junior Tori Gates, vice president of the college’s SSDP chapter, said they were pleased with the turnout at the event.

“I thought it was very successful,” she said. “People were getting involved, and they seemed very receptive to what we were teaching them, and they seemed like they were very happy with the knowledge that they gained from it.”

Information about the different forms of MDMA, with street names such as ‘magic beans’ and ‘Molly,’ were among the topics covered.

Students were given recommendations for safe use of the drug, such as having a sober companion when ingesting MDMA.

Students were also educated on the origins of MDMA and the danger of impurities such as caffeine and bath salts found in MDMA pills. The discussion covered the negative effects of MDMA, such as reduced production of the chemical dopamine in the brain.

In 2011, 2.6 percent of Ithaca College students reported having used Ecstasy in the past month, and 92 percent reported never using Ecstasy in their lifetime, according to a 2011 American College Health Association survey.

The Ithaca College chapter is modeled after the “Just Say Know” chapter at the Virginia Commonwealth University. Devon Tackels, national outreach director of SSDP, co-founded ‘Just Say Know’ during his time at VCU.

He said young people prefer to be presented with the facts and science behind drug use, instead of being given biased perspectives.

“We collaborated to have student presenters and healthcare professionals create a drug education seminar based on facts and not fear,” he said.

Lisa Smith*, one of the students who attended the educational session last week, said the presenters’ approach to the topic was interesting.

“I thought it was really interesting that they weren’t condoning or condemning the use of it,” she said. “They were just really trying to inform the user how to use it safely and decrease the negative side effects of it.”

Smith, who is not a user of Ecstasy, also said the discussion left her more prepared to help some of her friends who do use the drug.

Nancy Reynolds, director of counseling and wellness at the center for health promotion, said harm-reduction strategies are better than abstinence-based education when it comes to college-age students.

“Amongst young children, the abstinence-based model is effective,” she said. “But as people get older, they need to have a more personalized approach, which involves looking at the personal effects that they are experiencing from drug use.”

Similar educational programs are going to be held on a monthly basis. SSDP student leaders said next month is likely to focus on psychedelics, which are drugs that induce hallucinations and altered sensory experiences. The safe use of alcohol is set to be a discussion topic next semester.