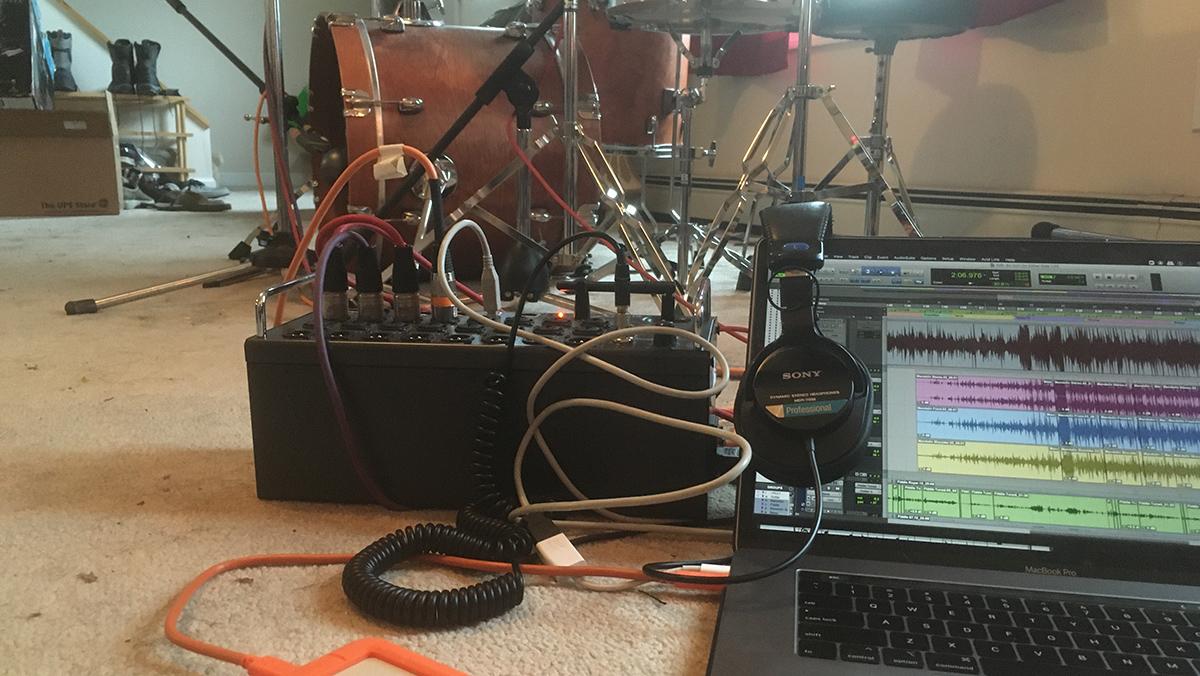 Courtest of Steven Bluestein
Out of Touch Records works to improve the quality of recordings by mixing and mastering audio tracks for everything from graduate school auditions to podcasts, though senior Nicholas Thompson, a founder of Out of Touch said its clientele is not confined to just students.
By Ryan Bieber — Staff Writer
Published: November 30, 2020

When senior sound recording technology majors Julianna Cavallo, Steven Bluestein and Nicholas Thompson found out classes at Ithaca College would be remote for the fall semester, they decided to change their tune and formed an audio editing company called Out of Touch Records.

Out of Touch works to improve the quality of recordings by mixing and mastering audio tracks for everything from graduate school auditions to podcasts, though Thompson said its clientele is not confined to just students. All three have been friends since freshman year and work as sound engineers for the college’s recording services, where they edit and process audio for concerts and recitals in the James. J. Whalen Center for Music. Cavallo said that when the college shifted to remote learning and recitals were canceled, the three realized they would not have paying jobs and decided to take matters into their own hands.

“Steven and I were texting and he was like, ‘You know what would be funny? If we did it ourselves,’” she said. “We were like, ‘Hmm, let’s see if we can actually get something together.’”

Cavallo said the company name is a reference to the virtual world everyone is living in amid the COVID-19 pandemic.

“We’re all kind of out of touch right now, but music is kind of the unifying factor,” she said.

Cavallo serves as the business operations manager, taking care of booking appointments, finding clients and managing social media. Thompson handles most of the audio editing as the main producer and audio engineer. Bluestein is the designated video engineer and is in charge of enhancing any videos that go along with the recording.

Earlier in November, Out of Touch helped Erin O’Rourke ’19 with audition recordings for her graduate school applications. O’Rourke was a music education and vocal performance double major at the college and is planning to major in opera performance for graduate school. O’Rourke said that with all the pressures of applying to schools, she is glad to have Out of Touch take care of the audio and video.

“I’m definitely a bit nervous about the whole process, but I’m excited knowing that I can rely on Out of Touch Records with everything,” she said. “It’s saving me a lot of money and a lot of time to be able to have this, and I feel so much better knowing I’m going to have these recordings not just for grad schools but also for competitions and my portfolio.”

Cavallo said the price varies depending on the amenities and number of hours required for the project. On average, she said they charge $30 to $40 for mixing and mastering per song, and the student rate is half of that, at $15.

“We’re students helping students,” she said. “That’s the main idea. We’re going to give the most reasonable price and work with people.”

Nate Richardson, owner of Rep Studio in downtown Ithaca, charges $80 an hour for recording, editing, mixing and mastering with an engineer, though he offers more services and selections than Out of Touch. Richardson said the $80 price point is low, even by industry standards, and is meant for local, smaller-type bands in Ithaca. For large corporations, he typically charges $160 an hour. Richardson said the high cost of rent in downtown Ithaca, as well as taxes and electricity, contributes to his price point.

“It might seem like a lot, but I do have a lot of expenses,” he said. “There’s a different need to raise the rate, but there’s also the counterpressure to keep it affordable.”

Currently, Out of Touch is helping to edit Girl’s Undefined, a podcast that tackles issues of women’s rights and politics in the context of college life. Bella Ares and Thompson’s sister, Lauren, two freshmen from Salve Regina University in Rhode Island, started the podcast this October. Lauren Ares said that having Out of Touch’s help has improved the quality of her podcast and provides the two with more time to focus on the podcast.

“In my head, I was like, ‘I would never need this,’ but in reality, it’s really helpful,” she said. “We record our podcast on our iPhones, which is totally low quality. … There’s tons of background noise, but [Thompson] clears it all out and it makes us seem more professional.”

Out of Touch will be helping Payton Crispe, a senior dramatic arts student at the New School in New York, with a musical she is writing and recording for her senior thesis. Crispe’s musical has several lead singing roles, but with the pandemic keeping actors from being in the same studio, she said she is relying on Out of Touch to fuse the separate performances into a cohesive sound.

“What I’m really excited about with Out of Touch is that they’re going to help me weave these different voices together, even though I’m not necessarily in the same room with the actors like I would have been,” she said. “They’re really going to help me put it all together and sound as if we did all go to the recording studio as a cast and sing the songs together.”

Crispe said she believes Out of Touch will make her musical sound more professional and ultimately help her submit her work to play festivals and music festivals.

“It makes it feel like it’s not just a college student writing music for the first time and that this is a real musical that could be produced,” she said. “I want to finish the musical and have a result that I’m proud of.”

“At school, we have this huge array of equipment, so going from this whole arsenal of studio gear to whatever I have on my laptop and what I’ve bought is really limiting,” he said. “But it’s also sort of positive because I know the gear so well.”

Will Russell, lecturer in the Department of Media Arts, Sciences and Studies and owner of Electric Wilburland Studio in Newfield, New York, said this shift to recording in home studios has increased in the recording industry in recent years, even before the pandemic.

“When I first started doing this, if you wanted to make a quality recording, the only option was to go to a recording studio because you couldn’t afford the technology that was required to do a good job at home,” he said. “Now, anyone with a credit card can buy inexpensive recording equipment that doesn’t suck.”

Out of Touch has taken advantage of this trend. Bluestein noted how the technological shift has made sharing recordings with others much easier.

“I think even professional studios and everyone in the business are struggling to adapt to this situation, but there are a lot of good technological things that have come along,” he said. “You can do live mixing from one place then send high–quality audio right to someone’s house anywhere in the world and they can hear it.”

Richardson said the pandemic has been difficult for recording studios, as many bands are no longer recording or do not have the money to record because of a lack of shows.

“It’s been tight and it looks like it’s getting tighter at the moment,” he said. “We’ve definitely lost a lot of band work and work in general just because of the economy. … I‘m scrambling, looking for other gigs to keep us going here.”

Cavallo said the company has been a great learning experience and helped to hone her audio and business skills.

“We’re immersed completely,” she said. “It’s a whole other thing to completely put yourself out there and have people come to you and then you have to deliver.”