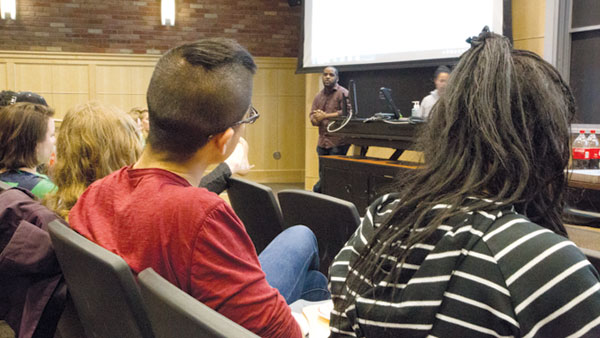 Senior Cedrick-Michael Simmons, president of the Student Government Association, and his Task Force on Diversity and Inclusion met with about 30 concerned students April 11 to discuss incidents of microaggressions on campus and what could be done to address them.

The focus of Simmons’ task force is to raise awareness about the issues of marginalization and microaggressions at Ithaca College. Microaggressions are comments and behaviors, often unintentional, which are oppressive and can disrupt the college’s education and campus climate.

Students who attended the meeting were given time to share personal experiences with microaggressions on campus.

Senior Christina Mathew, who is South Indian, said a professor once struggled to learn her name because he perceived it as too common.

“It was the first week of class, so he was trying to learn everyone’s names,” Mathew said. “He says, ‘Don’t you ever wish your name was more exotic?’”

Mathew said these sorts of interactions can strain relationships with professors and have an impact on grades, but dropping a class becomes difficult when it’s a requirement for a major.

Gipsy Fernandez ’13, who speaks Spanish and English, said when she was a freshman music major, she had a hard time pronouncing German words for a song and her voice teacher didn’t understand why she was struggling because English and German are both Germanic languages.

“She’s like, ‘I don’t understand why you’re having such a hard time; this is so close to our language,’” Fernandez said. “Who’s language? I speak Spanish, sweetie, whole other sector.”

During discussions with administration this academic year on the issue, Simmons said he has been asked for specific examples of these incidents. To address this, Simmons said he invited President Tom Rochon and Marisa Kelly, provost and vice president for educational affairs, to the April 11 meeting to hear personal experiences from students. Simmons said he received no response and neither Rochon nor Kelly appeared at the meeting.

After sharing stories, Simmons and senior Willa Erickson, vice president of campus affairs for the SGA, facilitated a brainstorming session to come up with solutions to the issue of microaggressions on campus. To foster a better understanding of the broad range of students enrolled at the college, students at the meeting suggested diversity training be given to resident assistants and professors, especially for those who participate in student organizations.

Other suggestions included a week-long awareness-raising event and establishing a physical space on campus, such as a lounge, where students could come to share their experiences safely. Students called for a hired position unaffiliated with the college to handle reports of microaggressions, as well as a general acknowledgement from the college administration that these issues exist.

Simmons said he was satisfied with how the task force meeting went and was glad students had an opportunity to share their experiences.

“Friday was the chance to vent and help students know they’re not alone and understand what microaggressions are,” Simmons said via email.

Junior Taj Harvey, who attended the April 11 meeting, said the college, as an institution, would benefit from improving the inclusiveness and acceptance on campus for a diverse group of people.

“By having more students be able to come to college and being able to feel like they’re in a comfortable, safe community, you basically continue to promote that level of success with student graduations,” Harvey said.

Simmons said the SGA will administer a survey focusing on microaggressions to a select portion of the student population next week. He said the SGA survey will ask key questions that were on the 2012 Campus Climate Survey that the SGA still does not have answers to. The goal, he said, is to get a better sense of how people are understanding and responding to microaggressions and to collect new ideas for structural changes to address them on campus.

Simmons will be hosting a second event April 25 where he will present the survey findings to invitees, which include Rochon and other administrators, the President’s Council, faculty, staff and students.

“The primary audience that we want is the President’s Council because we’ve been trying to have those discussions with them all year,” Simmons said. “It’s now more than ever important to inform them, to create that sense of investment and then to offer not just the problems but the recommendations that are student-centered about how to make this campus more inclusive.”