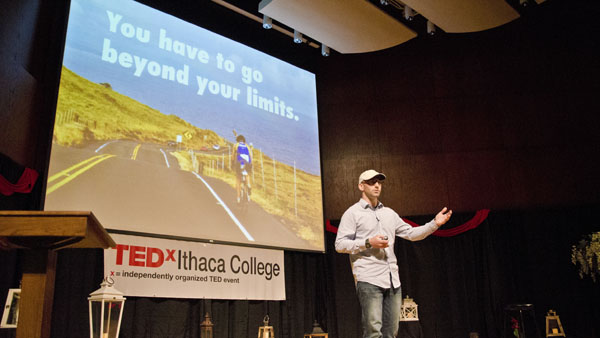 Four hours into his double marathon run on the Big Island in Hawaii, Adam Peruta, assistant professor of strategic communication at Ithaca College, was cursing the burning asphalt beneath him as he lay debilitated after his left knee gave out.

“Searing pain shooting up and down my left side, and I could barely put any weight on it,” he said in the talk he gave at TEDxIthaca College. “I’ve been doing it long enough to know when something is wrong … and something was definitely very wrong.”

The 52.4-mile run was part of the 2012 Ultraman Triathlon, a 320-mile race equivalent to the distance from Ithaca to Washington, D.C. It was his second Ultraman, and despite his injury, he finished it.

“I knew I wouldn’t be able to live with myself if I gave up,” Peruta said.

He was one of 16 speakers selected from the Ithaca community to present a TED-style talk at the first ever TEDxIthaca College held from 10 a.m. to 5 p.m. March 22 in the Hockett Family Recital Hall in the Whalen Center for Music, funded by the Student Activities Board through a grant from the Office of Student Engagement and Multicultural Affairs. 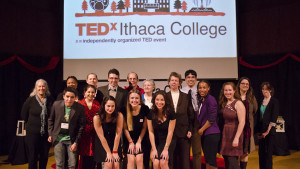 Where “x” stands for “independently organized TED event,” TEDxIthaca College is a product of the TEDx initiative to grant free licenses for people anywhere to organize local events resembling TED Talks conferences. TEDx events are localized versions of global TED conferences, where speakers from around the world share their ideas in 18 minutes or less.

Bringing a TEDx event to the college was the work of senior Michela Moe, senior Ilana Miller and sophomore Lulu Helliwell, who have been planning its execution since last spring when they applied for the license. Helliwell, the SAB liaison for the planning group, said SAB has never coordinated an event of this caliber.

“Bringing TEDx to the Ithaca community was such a huge opportunity, and SAB has never done anything like this, so we just went with it,” Helliwell said.

The license agreement, approved last July under Moe’s name, deemed the conference room could contain no more than 100 bodies, including the speakers, media crew and audience. Miller said a simulcast room was set up in Iger Lecture Hall for about 75 extra people, including the guests of the speakers, to view the conference through a live stream. Attendee registration occurred between Jan. 1 and Jan. 31.

Miller, the speaker chair for TEDxIthaca College, said online speaker applications asked those interested in presenting to explain how their topic would impact the Ithaca community. After receiving about 70 applications, she said, they narrowed the list to the 16 people who they interviewed over a span of three weeks.

Though Helliwell said they decided not to designate a theme to the series of presentations, many of the talks centered on disabilities.

Habicht said she was in excellent health in 2009. But on the morning of June 11, she was making coffee when she noticed something was very wrong.

That summer day, she had a major stroke. Facing the audience with tears in her eyes, she relayed how she began walking again in 2010 because of her older sister’s support and said that determination is a fight to never give up.

Freshman Kim Nicolas, one of the student attendees, said she related to the theme of disabilities because her sister is paraplegic, or physically handicapped from the waist down.

“Trying to dismantle this idea that you have this undesirable trait with a disability is really interesting,” Nicolas said.

Moe, Miller and Helliwell anonymously chose students based on their essay responses about what they would gain from TEDxIthaca College. Senior Hannah Sands, who was also an attendee, said in light of her impending graduation, this event would help her cherish whatever inspiration for growth she can find.

“What better way to launch myself into the ‘real world’ than through hearing stories of motivation and determination and perseverance,” she said.

Moe said the funding, which came entirely from SAB, allowed students to attend at no cost.

“My goal was to make sure that this was a free event for as many people as we could offer it to,” Moe said.

Her inspiration to bring TEDx to the college came from her attendance at TEDxMaui in January 2013, where the theme of “The Dream is Real” asked audience members what they want to make a reality after that event.

“Imagine if you could handpick the best professors around the world on topics that you would love to learn about and sit there all day and just learn,” she said. “I thought Ithaca would really flourish with this happening there.”

Helliwell said while each of the three planners had specific titles, the entire process was a group effort.

“At the end of the day, our titles didn’t limit our responsibilities,” she said.

President Tom Rochon said he appreciates how TED Talk-related events bring together ideas from people everywhere, and he is proud of the work the three students have done in executing the event.

“This event benefits our students and others who participated because it provides an opportunity for articulating one’s ideas and experiences,” he said.

The application and the impact of these messages was not limited to students at the college. Diana Viglucci, a senior majoring in interdisciplinary studies at Cornell, said the topic of disabilities and mental illness particularly resonated with her because she also has a mental illness.

“Your physical limitations aren’t who you are as a person,” she said. “That reminds me of the other stigmas people have around mental illness.”

The other student speaker from the college was junior Rachel Gray, who partnered with Rachel Wagner, associate professor of philosophy and religion, to present “Xbox Apocalypse,” an analysis of how the line between the realms of video games and real life have greatly dissolved over time.

A departure from the typical speech format, Anne Rhodes, who works for the GreenStar Community Projects in Ithaca, put on a theatrical display of her main message from her own experiences, “What Does it Mean to be White?”

In a soliloquy of thoughts in the mind of a made-up white female character, Rhodes said phrases like “get out of jail free” and “let’s form a committee, let’s talk about doing something,” and she was unable to complete the phrase “with liberty and justice for …”

In an interview following her performance, Rhodes said she is familiar with the terrain of white privilege and the complaints against it given her decades of anti-racism work, which culminated in this collection of thoughts.

“I just put together a kind of collage, and I wanted it to not so much make sense as in be linear and teach something, as just hit a number of different things to raise a lot of questions in people’s minds,” she said.

Other presenters who are faculty from the college included Monique Markoff, lecturer in the Department of Education, who spoke on learning in the classroom with technology; Doug Turnbull, assistant professor in Computer Science, who related technology to growing local music; and assistant professor Nia Nunn-Makepeace in the Department of Education who discussed the impact of the Community Unity Music Education Program, a 501c3 that serves disenfranchised children with four-week multicultural performing arts summer programs in Ithaca.

Other speakers included Michael Koplinka-Loehr from the Rescue Mission and Jennifer Johnson, burial coordinator at the Greensprings Natural Cemetery Preserve. Scott Morris, who founded the AmeriQoin Cooperative in Ithaca, spoke about prioritizing people over paper wealth and was followed by Michelle Courtney Berry, who concluded the conference.

Berry is a nationally accredited stress management trainer and entrepreneur who has taught at the college and appeared on Good Morning America. Her message was catered to her largely college-age audience, to which she gave advice on how to take care of their bodies now in order to mitigate the inevitable health effects later.

“Don’t wait another day to live from your heart,” she said. “I don’t want to die not having lived fully every day.”

CORRECTION: Two paragraphs inaccurately describing a talk by Ithaca College junior Aileen Tartanian has been removed from an earlier version of this story.