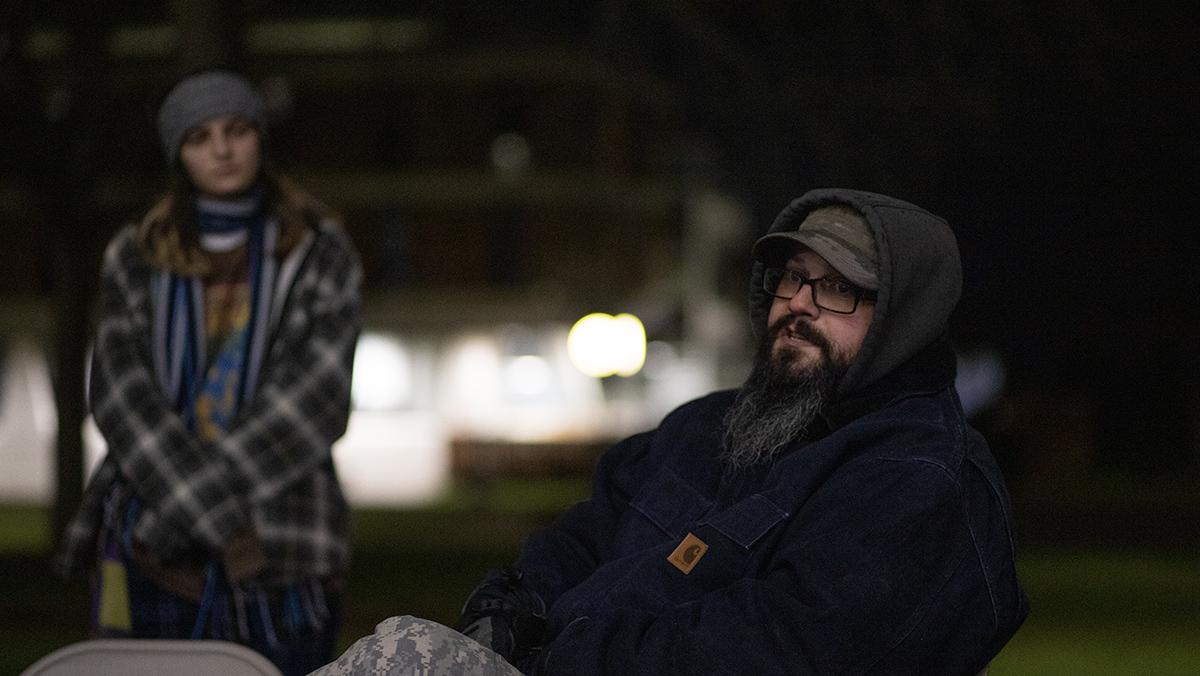 The sleepout was held from 8 p.m. to 12 a.m. Dec. 2 on the Academic Quad. Seniors Olivia McKeon, Danielle Chassy and Wren Perchlik said they planned the fundraiser as part of the final project for their Civic Engagement Seminar course. The course requires students to choose a social issue to research for the semester and get involved with a local group that works to address the issue. McKeon, Chassy and Perchlik said they chose to spend the semester researching homelessness in the county because they saw that it was prevalent in the Ithaca area and wanted to explore the problem more closely.

“I’ve seen homeless people in Ithaca and seen places and parks where there was evidence of people living there, so I knew it was a problem locally,” Perchlik said. “I thought maybe we could help something or spread awareness.”

The students sold snacks and drinks and collected donations to benefit Second Wind. About 10 students attended the sleep out, and more students stopped briefly to purchase food or make a donation. McKeon said via email that the students raised over $500 in donations from their family and friends and sales during the event.

Second Wind provides housing and services for homeless individuals to help them transition out of homelessness. The nonprofit has 18 cottages for men in Newfield and is currently constructing four units for women, with space for two children in each unit, in Dryden. Second Wind works with their residents to become independent and allows them to stay in their cottages for as long as they need to feel comfortable.

According to Covenant House, a nonprofit that provides shelter and services to homeless youth, during a typical sleepout, participants sleep outside for one night to raise money and awareness for homelessness. The college’s Habitat for Humanity chapter held sleepouts in the past, but McKeon said the Office of Public Safety and Emergency Management told the students that the event could not be held past midnight. Though the students could not actually sleep outside through the night, they said they hoped to draw attention to local homelessness and encourage students to be part of the solution.

McKeon said via email that the group chose to support Second Wind because it is an organization specific to the Ithaca area that works to build relationships with the homeless population.

“Second Wind’s mission to provide the homeless community with not only homes but hope is also really inspiring,” McKeon said via email. “It was great to hear about the personal connections that those at Second Wind make with the homeless population. This level of compassion is something that drew us to the organization.”

The group invited Mike Foster, community manager of Second Wind, to speak at the sleepout. Foster said his experience with being homeless motivated him to help others in similar situations.

“I was homeless for a decade — an alcohol and drug addict — before I got sober and started helping people experiencing that,” Foster said. “These are my people. [Second Wind residents] are not clients in my case, they’re my friends.”

Foster said homelessness is a problem in Ithaca partly because the state and local government solutions are not effective. Foster cited a report from the Horn Research Group, which was commissioned by the Tompkins County Human Services Coalition in Fall 2021 to assess the state of housing and homelessness in the county. The report found that the county’s rate of homelessness per 10,000 people is 12.6 people. This is the third highest rate among neighboring and comparable Continuum of Cares, the local organizations that organize housing, funding and support services for homeless individuals.

According to the report, the county does not have enough space in emergency shelters and public housing to accommodate all of the county’s unhoused people. The waitlist for public housing in the county is over two years long. When the data was collected in 2021, there were 29 beds available and 103 individuals seeking emergency shelter. The majority of people who need emergency shelter are temporarily placed in motel rooms without support services. Many of the people who are temporarily housed in shelters and motels are likely to return to homelessness.

Perchlik said he hoped the event would encourage students to learn more about the Ithaca community.

“I feel like a lot of students probably come here and leave without really knowing too much about local issues,” Perchilik said. “There’s a lot I didn’t know too, so … it’s good to get to spread awareness about the issues and ways that students can be involved.”

Chassy said she hoped the event would help students see that they can make an impact on local homelessness.

“It’s a lot easier [to help] than you might think,” Chassy said. “It doesn’t have to be [something] elaborate like, oh, I have to donate $3,000 to the homeless. You can do something as simple as go to the [Second Wind] website and find a time when they’re building a house and sign up to help with that.”

Foster said he was grateful that the students chose to support Second Wind and educate the college community about local homelessness. He said that although the group was small, they could have a large impact on reducing the stigma around homelessness and encouraging other students to give back to the local community.

“All it takes is a handful of people to raise awareness and let others know,” Foster said.