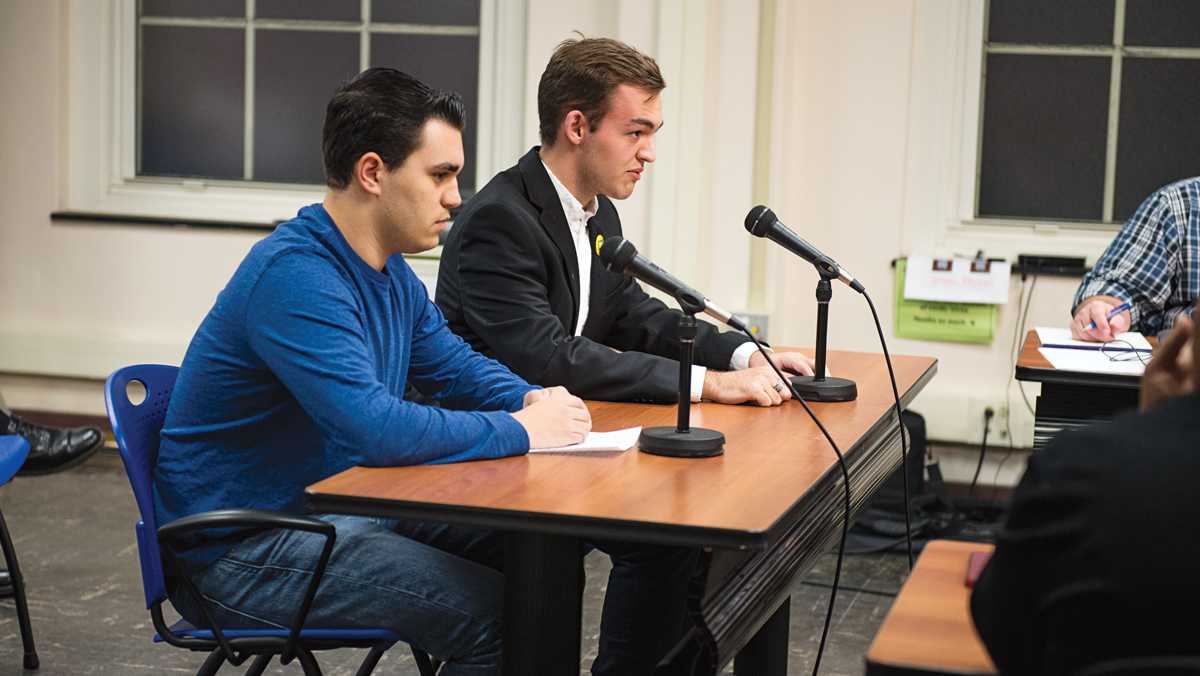 Ithaca College freshman Alexander Maceira and Cornell University sophomore Vernon Lindo presented a proposal that lays out problems the students see in lobbying, super PACs and elections nationwide, and presented a set of guidelines for the City of Ithaca to endorse at Ithaca’s Common Council meeting Nov. 15. Common Council voted against supporting the proposal because they said it was not specific enough.

The proposal presented to ban lobbying and to make the money in super PACs more transparent and independent from candidate’s campaigns. It also called to end gerrymandering and to change the voting system. These are all part of the American Anti-Corruption Act, which is being promoted by Represent.Us, a group advocating for lessening the influence of money in politics, around the country.

The Ithaca chapter of Represent.Us was started by a former art professor at Cornell, Gillian Pederson-Krag, who, along with Romanelli, wanted to try and get this act passed through the local Ithaca government and to increase support nationally by increasing awareness at a local level. At the meeting, Common Council members said they were unsure of how adopting the resolution would help, as there was little effect the proposal would have, as the problems mentioned in the proposal are outside the Common Council’s jurisdiction.

Maceira and Lindo both had three minutes to present their case to the council, as did local community member Diana Ozolins. Maceira talked about the anti-corruption laws they want implemented, and Lindo discussed the bipartisan appeal of the act. Ozolins talked about wanting Ithaca to support the act and mentioned a petition they started to gauge support for the act that has received 803 signatures. Romanelli said the petition they started is only physical, not online, and was made to show the Common Council that there is support for the act.

Deborah Mohlenhoff, fifth ward alderperson, said she and other members of the council will work with the students to come up with a clearer proposal for the council to vote on at a later date.

Maceira said the proposal was not something they wanted to be a law, but that they wanted to get a conversation started about addressing these issues.

“I think it was supposed to be general because there is a lot of community involvement throughout the process, so we want specifics, but we just wanted to propose it just to get some talk,” Maceira said.

Maceira said the intent behind the proposal was for it to be a rulebook for the council to base decisions on, and not an actual law.

“Originally we saw it as, like, a rulebook of guidelines rather than actual legislation, so here are some guidelines and rules you can take to make your own legislation,” Maceira said. “But now, since they’ve given us some criticism about how to make it actual rules, that gives us some stuff to work with.”

Duscon Nguyen, a representative from the second ward, said the proposal is too general.

“I don’t even agree with all of it, but I do agree with the spirit of it and the general mission of this set of goals,” Nguyen said.

Dearworth, who has helped with the campaign, said the group would have liked it to pass, but that she understands that their wording could have been more specific.

Romanelli said this kind of criticism was to be expected, and that they see it as a success.
“This is the role of government, when you present a bill, they’re going to scrap it, and they’re gonna rewrite it to do what they want,” Romanelli said. “This is getting a B–plus on an important test.”

Students and citizens of the City of Ithaca have come together to unanimously pass the Sweatshop Free Initiative, a campaign to fight inhumane working conditions, backed by Cornell University’s Organization for Labor Action. Effective Jan. 1 2012, the city will take steps to ensure that all city purchases of apparel and textiles totalling more than…

The Common Council has banned the leasing of City of Ithaca land for hydraulic fracturing in a unanimous vote Wednesday.