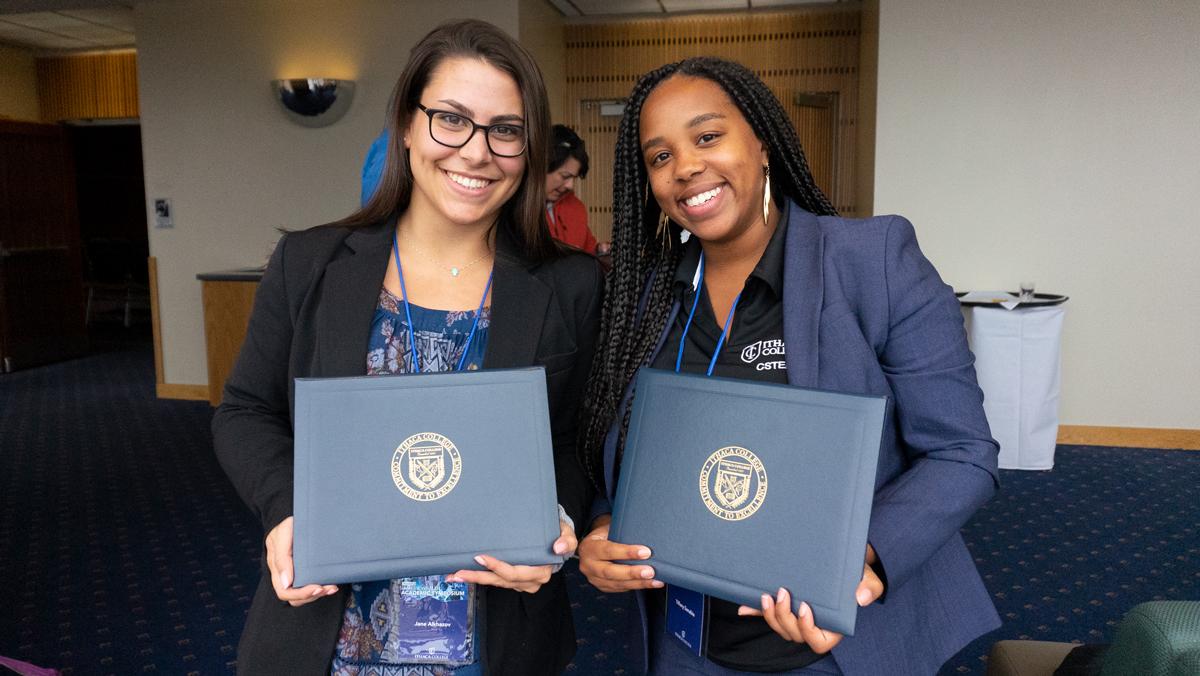 Over 400 students presented their research projects at the 22nd annual James J. Whalen Academic Symposium on April 2, where 25 students were given awards for their work.

Before the awards were given out at the end of the day, La Jerne Cornish, provost and senior vice president for academic affairs, said the symposium showcases the best students at the college. The winners were chosen by several judges and received plaques commemorating their successes. Cornish, who is a co-chair of the strategic planning committee, said a potential goal of the five-year plan would be to expand the symposium to five days.

“I spent most of my day here, and I was just amazed by the type of research you are engaging in,” Cornish said. “This is what makes Ithaca College amazing.” 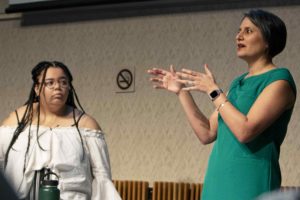 Senior April Carroll and Belisa Gonzalez, associate professor and director of the Center for the Study of Culture, Race and Ethnicity, give a presentation based on a play Carroll began working on her freshman year. Connor Lange/The Ithacan

One of the winners, senior Jane Alkhazov, whose project consisted of translating letters of those living in Russian gulags, said her project was important to her because of her family history.

“Coming to America, my parents are from Russia; they decided to teach me Russian first before English,” Alkhazov said. “I think it’s rooted in my history. Getting to know more about your culture and where you come from is always super important. But, I think even more than that, just being able to engage in communications and language studies is something I’ve always been drawn to.”

Seniors Zoe Howland and Avery Santiago received a symposium award for their project, which focused on the relationship between body image and sexual pleasure for fat women. Howland said the two chose their subject matter because they noticed a lack of fat women being represented in academia.

“We decided to do this project because we weren’t seeing ourselves positively represented in mainstream culture or in discussions about sexuality in academia,” Howland said. “We’re both seniors, so it was really cool to kind of finish off our time at IC doing a project that we really care about and having that validated and getting to present it felt amazing.”

Santiago said the two of them wanted to change how plus-size people are talked about in society.

Senior April Carroll and Belisa Gonzalez, associate professor and director of the Center for the Study of Culture, Race and Ethnicity, talked about their work and experience in the keynote presentation, “Black Girl Black Girl What is Your Song: and Other Confessions from Centering Blackness at a PWI.”

Carroll and Gonzalez’s presentation was based on a play that Carroll began working on during her freshman year. The play focuses on four black women attending a predominantly white institution and their experiences at the college. Eventually, these women find out that not only are they constantly being confused with one another but that everyone at the school thinks that they are one another.

Gonzalez first met Carroll when she was a student in her class during Fall 2017. She was first approached by Carroll in Spring 2018 with this project proposal for the play, which would be an independent study. Gonzalez said that she wanted to collaborate not only because of her relationship with Carroll but also because of the format of the study.

“Last spring, when April approached me about doing an independent study that would result in her writing a play about the experiences of four black women at a predominantly white institution, I jumped at the chance,” Gonzalez said. “Not only did I do this because she’s an amazing student and I wanted to collaborate with her, but I rarely, if ever, get a chance to conduct research that results in a creative work.”

Though Carroll said that the play is based on her personal experiences in the Roy H. Park School of Communications, these experiences are not limited to hers alone.

“Though what I do have to say is essential and important in understanding my college experience, I think that you always have to remember that my experience is not the same as every other black girl who goes to a predominantly white institution and should not be treated as such,” Carroll said. “This extends not only through all of Ithaca College but to higher education as a whole.”