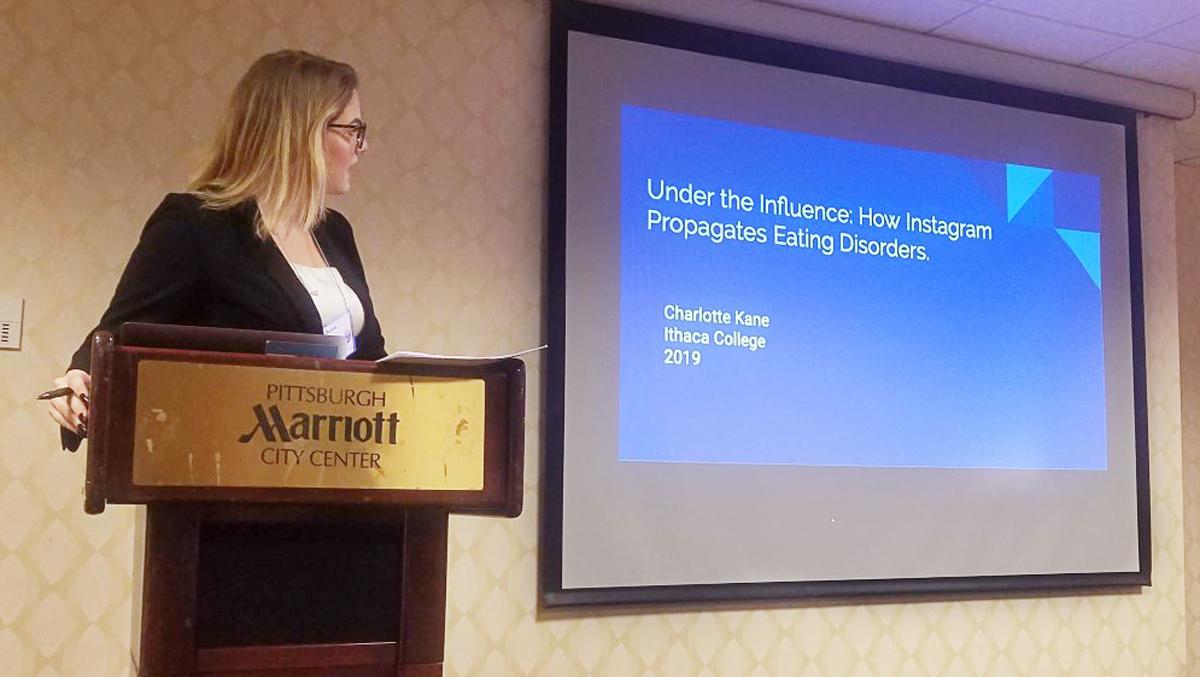 Peggy Carter, a character in the Marvel Cinematic Universe who is romantically linked to Captain America, is often regarded as a feminist character. Yet, at the Mid-Atlantic Popular & American Culture Association’s (MAPACA) annual conference, senior Andrea Yzaguirre challenged the impact of Carter’s character development in her presentation, “The Woman Got Married: How Peggy Carter’s Happy Ending Isn’t So Happy.”

MAPACA is an academic organization that aims to further critical academic analysis of American popular culture. MAPACA’s 2019 conference took place at the City Center Marriott in Pittsburgh, Pennsylvania, from Nov. 7 to 9. Yzaguirre’s presentation, as well as senior Charlotte Kane’s presentation, “Under the Influence: How Instagram Propagates Eating Disorders,” are finalists for the Walden Prize for Graduate and Undergraduate Papers, an award given annually to emerging scholars in pop culture studies. Any undergraduate or graduate student reading at the current year’s MAPACA conference is eligible for the award, which has not been announced yet.—Kane presented her research on the correlation between Instagram and eating disorders with her presentation. Her personal experiences with anorexia and usage of diet pills and detox teas greatly influenced her topic choice, she said.

“When you say outright that Instagram is causing eating disorders, it sounds crazy,” Kane said. “But if you look at the way I present it with a scenario, if a girl uses the money her parents give her to go to the mall to buy some diet pills that she saw influencers using on Instagram, they’re from GNC, a health store, so she thinks they’re healthy. She’ll start losing weight and get more validation online, creating a vicious cycle.”

The majority of presenters at academic conferences are graduate students or professionals, said Katharine Kittredge, professor in the Department of English. Students are able to engage with other experienced scholars when they present as undergraduates, Kittredge said.

“Presenting at conferences is a crucial skill for those who will be going into academic professions, but it also promotes skills that are important for most other professions,” Kittredge said.

Oliverio said she grew up watching dark youth films like “Monster House” and “Coraline,” and these films led her to her presentation topic. Oliverio’s presentation, “Where There Is No Imagination There Is No Horror: Horror Marketed Towards Youth Through Animated Films,” focused on the horror movie genre.

“Presenting is really finding what you’re interested in, in any particular zone or genre, and start Googling and consuming whatever you can find — videos on YouTube, existing research — then you start building,” Oliverio said.

The preparation for MAPACA began in the middle of summer, Oliverio said. The presenters began exploring potential topics and continued to refine them at the start of the semester.

MAPACA is open to individuals presenting research related to popular culture across a wide range of disciplines.

“I loved this conference because I didn’t feel like I had to be overly mathematical or scientific,” Oliverio said. “That was always my perception of academic conferences. I love that I could delve into media and see and experience the world that I am going to work in and be a part of.”

“Most of my research in the past has been on Jane Austin adaptations and pre-19th–century women’s works,” Berger said. “I realized that so many of my presentations had been based on how these things of the past influenced women today, but I never thought to look at what media influenced me.”

Suna said that presenting at MAPACA offers students a great opportunity to meet other scholars interested in similar areas.

“I spent half the conference getting to know academics and seeing their work,” Suna said. “Presenting has really confirmed that I want to go to grad school and take my work down a very academic path.”

Kane said the opportunity to attend and present at an academic conference benefited her personally and professionally.

“Presenting really built my confidence,” Kane said. “If I took the time to read dozens of articles, I deserve to speak with authority.”

Commentary: Exclusionary pop culture fads need to be viewed as such