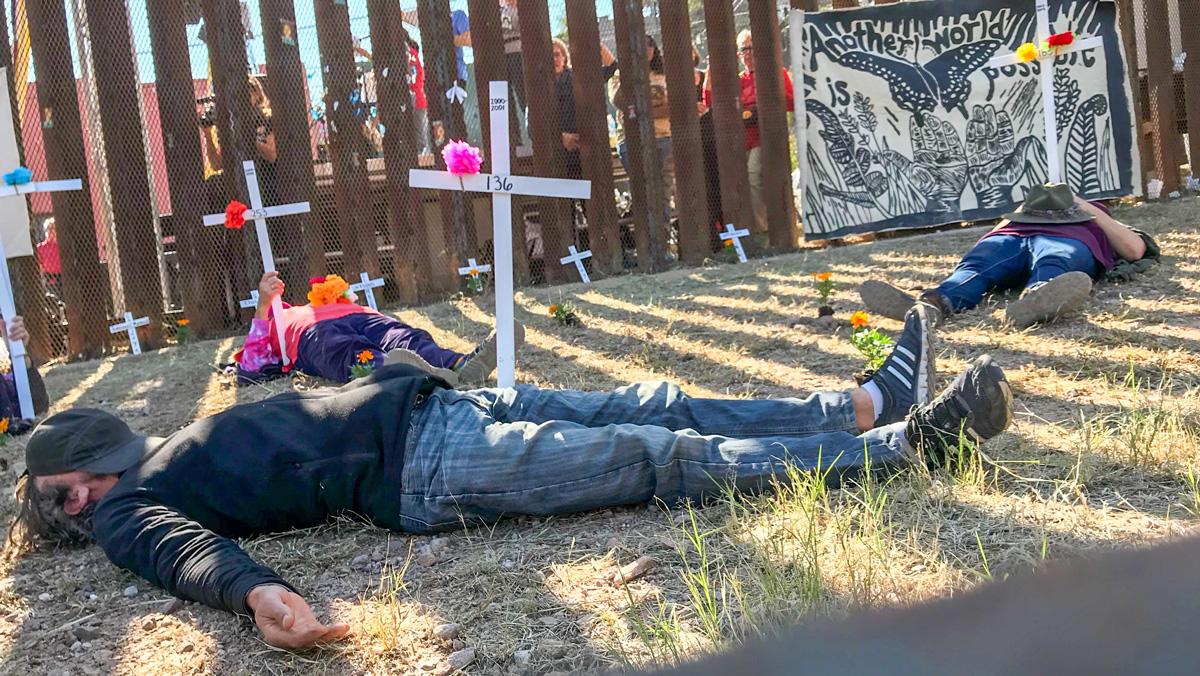 Courtesy of Patricia Rodriguez
The School of Americas Watch 2018 Border Encuentro hosted an “Overnight Vigil in Solidarity with the Refugee Caravan” on the Arizona side of the border Nov. 17. The vigil also included a die-in, which protested the deaths and disappearances of those who attempted to cross the southern border. The encuentro was held from Nov. 15 to 18 in Arizona and Mexico.
By Grace Elletson, Maggie McAden, Ryan King — Editor in Chief, Assistant New Editor and Staff Writer
Published: November 28, 2018

The southern border of the United States has been holding the spotlight in American mainstream media over the past few months, primarily due to the contentious immigration policies employed by President Donald Trump’s administration that are being widely critiqued.

A group of Ithaca College students recently took a trip to the U.S.-Mexico border to challenge these policies they deem as violent and oppressive. They were also there to bring light to broader causes, like neoliberal economic policies that cause mass migration, and local activism that addresses how their migrants’ hometowns can be restored.

The trip, which took place from Nov. 15 to 18, led seven students to Nogales, Arizona, and Sonora, Mexico, where they participated in the School of the Americas Watch 2018 Border Encuentro. SOA Watch is an advocacy group that formed in 1990 to protest the U.S. Army School of the Americas — a school in Georgia that trains military and law enforcement officers in Western Hemisphere countries. 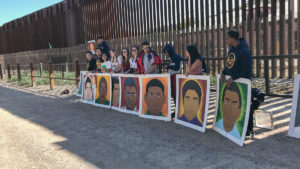 As part of the “Overnight Vigil in Solidarity with the Refugee Caravan” Nov. 17, images were displayed of those who have been killed or disappeared at the U.S.-Mexico border. (Courtesy of Patricia Rodriguez)

Alumni of the school allegedly murdered six Jesuit priests in El Salvador in November 1989 — an incident that sparked the formation of SOA Watch. SOA Watch says many of the school’s graduates have become some of the worst violators of human rights in Latin America.

In recent months, the Trump administration has come under fire for its family separation policy, which split up families seeking asylum at the southern border. Trump was also critiqued for stoking fear among American about the “migrant caravan,” a large group of people who were traveling to the U.S.-Mexico border to seek asylum.

The Border Encuentro — the Spanish word for “meeting” — involved a series of rallies, protests, vigils, workshops and other demonstrations of activism on both sides of the U.S. and Mexico border with the aim to protest border imperialism. This collection of protests and workshops also focused on what local communities are doing to replace borders, neoliberalism and border militarization, said Patricia Rodriguez, associate professor in the Department of Politics and one of the organizers for the trip. Beth Harris, retired associate professor in the Department of Politics, was also involved with the planning of the trip. 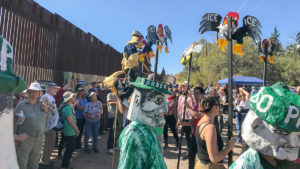 Part of the events included a parade called “Puppetistas!” involving a funeral procession and display of Puppetistas on Nov. 18. The green puppets are depictions of border patrol officers who have clashed with migrants in the past. (Courtesy of Patricia Rodriguez)

This is the third year that the mobilization has occurred at the border itself. Rodriguez said this was in an attempt to highlight the relationship between U.S. foreign policy in Latin America and the waves of displaced migrants that come to the border.

The first day of the Encuentro featured a rally and vigil at Eloy Detention Center and a protest in front of Milkor USA, a gun manufacturer. The next day featured a vigil in solidarity with the refugee caravan, a group of migrants that has been traveling to the U.S.-Mexico border. The last day involved a ceremony near the border wall to honor people that have died in border-related incidents. A litany of names of the dead was read aloud, and some people participated in a symbolic die-in, Rodriguez said. Afterward, there was a parade involving symbolic art.

For many of the students, the trip was not only an educational experience; it was deeply personal. Rodriguez said all of the students who went on the trip were connected to a history of immigration in some form. 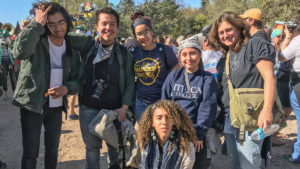 A group of seven students traveled to the Arizona-Mexico border Nov. 15–18. Patricia Rodriguez, associate professor in the Department of Politics, organized the third annual trip. (Courtesy of Patricia Rodriguez)

When senior Joe Cruz attended the vigil at the U.S.-Mexico border intended to honor those who had died in border-related incidents, he remembered their names were being read out loud. Suddenly, Cruz heard his own name called out: Someone who shared his name had died at the border.

“It was so personal,” he said. “I just shared a connection to these people that had lost their lives. Being there when they couldn’t was one of the most impactful sensory experiences that I felt.”

Cruz is a U.S. citizen from Texas, and his parents are Mexican immigrants. He said that he feels connected across borders and that this was his first experience in a border town.

“I didn’t really know what it was like to be in a border town until this experience,” he said. “I only would go through the checkpoints in a car, but during this [trip] I was up close and personal.”

Junior Diana Castillo, the daughter of immigrants from Latin America, went on the trip and said the vigil at the Eloy Detention Center was one of the most memorable events for her.

“The biggest impact of the moment was when we all marched toward the detention center,” she said. “It was really sad to think about how the only difference between these people is that they don’t have proper documentation and how privileged I am and others are to be born in the U.S.”

Castillo said the Encuentro highlighted how the U.S. has created the conditions in Latin American countries that lead to mass migration.

“If the U.S. just didn’t intervene in countries and cause extreme poverty and corruption of the government, then people wouldn’t leave their countries,” she said. “The U.S. is very much at fault for what’s happening. If you look at Honduras or any South American country, everything’s catching up to us.”

Sophomore Daniela Rivero arrived in Arizona about a week before most of the rest of the group to work with the SOA Watch media team.

“For me, it’s definitely very personal because I see the children being detained and the families being attacked at the border, and those are my people; those are my brothers and sisters,” she said. “It cuts very deeply to see how they are treated, and it’s also demonstrative of systemic issues and really just pokes holes in our conception of this state as one that protects freedoms and rights.”

Rivero is a first-generation immigrant from Mexico. She said she believes the freedom to move is a fundamental right of all people.

“People in my family have been able to migrate back and forth under varying legal statuses,” she said. “But I think it’s the right of anyone who needs or desires to move to be able to do that.” 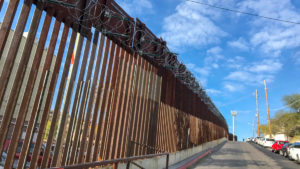 Arizona and Mexico are separated by a border fence. The fence is made of metal and lined with curls of barbed wire. (Courtesy of Patricia Rodriguez)

The students, who were responsible for finding their own funding for the trip, were also able to conduct a workshop of their own at the Encuentro. Rivero, who went on the trip, said the workshop focused on border imperialism, the climate crisis and youth mobilization.

“Our workshop as IC students was about youth mobilizing against border imperialism,” she said. “So, we got together and first did a brief presentation on what border imperialism is and what its effects are specifically in relation to the climate crisis, and then we opened it up for sharing.”

Rivero said she learned about things that are being done on different campuses across the country for organizing. She said she learned that as students attending a liberal arts institution, she and her peers are privileged in their ability to be politically active.

Rodriguez also said she gave a talk at the Encuentro with Phil Josselyn, who works for the Committee in Solidarity with the People of El Salvador. She and Josselyn spoke about violence in Honduras, U.S. policy and how communities are resisting by building connections with national–level movements. She said these groups are resisting multinational corporations and pursuing ways to build a new economy.

Rodriguez said the border looked different from the last time she had seen it. She said that during the vigil on Sunday, there were more barbed wire and security measures.

“This was the first year that it looked like that, but there was barbed wire everywhere,” she said. “They also had sealed off the area where we used to do the protests, so we couldn’t be close to the fence.”

Rodriguez said she thinks the Trump administration has made border policies more aggressive and has politicized the climate surrounding immigration. She said that at the same time, violence toward migrants is not new under Trump.

“That’s not to say that this hasn’t been happening with other presidencies,” she said. “In fact, Obama was one of the biggest deporters. The [U.S. Immigration and Customs Enforcement] raids have not started just with Trump. They’re more visible now.”

The group that attended the Border Encuentro will host a discussion about its experiences Dec. 4  in Business 301.

Correction: A previous version of this article included a transcription error. It has been corrected.

Students cover March For Our Lives rally in Washington, D.C.