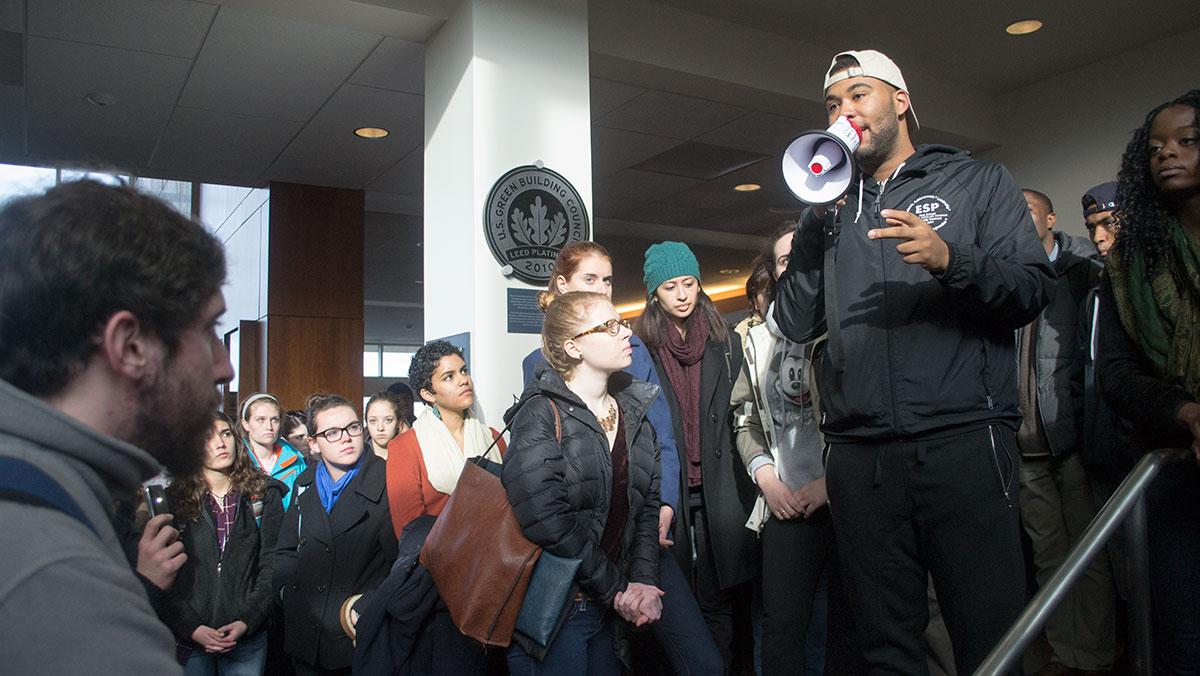 Campus protests stemming in part from the Michael Brown and Eric Garner decisions of last year have led a group of students to push for more racial inclusivity by advocating for a revised Native American studies minor.

Those in support of the minor’s modification, led primarily by sophomore Victor Lopez-Carmen and senior Kayla Young, hope to see it become more structured, with a tenured faculty line and a new curriculum. Lopez-Carmen said he feels a personal and cultural connection to the cause, fueled by his family history.

“I grew up on Yaqui territory and was taught my cultural hermeneutics by many people,” Lopez-Carmen said. “When I came here and noticed that the minor was in disrepair, I knew that something had to be done. It has been my dream to have a working minor that represents my people and all indigenous people by the time I leave this campus.”

Founded by professor Jack Rossen and associate professor Brooke Hansen in the early 2000s, the minor began in the Center for the Study of Culture, Race and Ethnicity and later moved to the School of Humanities and Sciences until the school’s dean suggested it be returned to the CSCRE. It moved back to the CSCRE at the end of the last academic year, where it joins minors in African diaspora studies, Asian American studies and Latino/a studies. The existing interdisciplinary minor requires 21 credit hours of coursework, including two courses from the conceptual frameworks, a three-credit capstone course and one course each from the following categories: power and liberation, comparative and international, policy and praxis, and culture and history.

Since it was established, Hansen said, the minor has never had a full-time faculty member. While the CSCRE has asked for such a faculty member, she said, the college has denied these requests.

“A faculty member teaching solely in the minor would be excellent and create a full-time person to oversee the minor,” Hansen said. “We, as a department, are committed to supporting Native American diversity in our faculty and courses whenever possible.”

In addition to the tenured faculty line and a revised curriculum, the student advocates have hypothesized renaming the program as the indigenous studies minor to further its inclusivity.

However, both Rossen and Hansen said they are against the renaming of the minor, as they feel it will lessen the distinctiveness of Native American studies. Rossen also said an indigenous studies minor would require far more resources, whereas Native American studies better reflects Ithaca’s Native American history and is a more effective career combination with majors such as anthropology and museum studies.

“I personally favor keeping it Native American studies because we live in Cayuga territory of the Haudenosaunee Confederacy and should recognize that,” Rossen said. “I fear that indigenous studies would submerge Native Americans and make them much less visible under the broader umbrella.”

Though Hansen said she finds the terms Native American and American Indian to be misnomers, she does not feel the term “indigenous” is any better because it often lumps native people with indigenous plants and animals, and she said it is less effective in advertising methods.

“The term ‘indigenous’ means of, or innate to, the land, which can be an important component of a group’s identity but doesn’t capture the sense of a contemporary culture and nation,” Hansen said. “Changing the name at this time may make the minor even harder to find than it already is. We need a major public relations campaign to get the word out about the minor.”

Asma Barlas, program director for the CSCRE, on the other hand, supports the renaming of the minor and said the program will be setting up a committee of interested faculty and Native American students this semester to transform it into a more global indigenous studies minor that will include the study of the Aborigines of Australia, the Maori of New Zealand and the natives of South America.

“We hope that once the new minor is fully functional, we will be able to move ahead with our plans to develop a major in comparative race and ethnicity studies,” Barlas said. “But we can only do this if all four of the center’s minors are equally strong.”

Lopez-Carmen said the administration has thus far been open to having preliminary meetings to discuss the future minor.

In the meantime, Rossen and Hansen encourage students to get involved by declaring the minor or taking classes within it, such as Hansen’s Service Learning in Native America course offered every May session on local Cayuga and Onondaga territories with the guidance of clan mothers, chiefs and nation members. In addition, Rossen and Hansen hope interested students will participate in Native American Heritage Month in November, which will feature events in coordination with OSEMA while they work to open a dialogue with the CSCRE about the future of the minor and develop upper-level Native American studies courses for next year.

“It is important to remember that minors are not just measured by how many people are in them formally, but in much broader impacts of the programming that occurs on campus and in town,” Rossen said.

Lopez-Carmen said he is prepared to face any resistance he may encounter to do what he feels is necessary to repair the minor.

“I feel that it will happen, but not without work on all levels,” Lopez-Carmen said. “After the intense advocacy, we are well on our way to getting it started. But I don’t want to count my chickens before they hatch, and I am still ready to advocate should there be resistance to what must happen on this campus.”