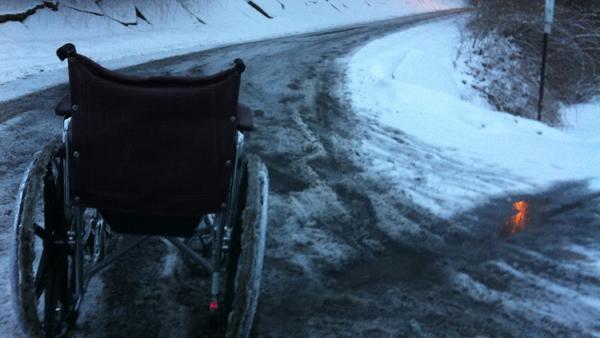 Courtesy of Mika Millirien
Senior Mika Millirien's wheelchair sits at the icy road that leads up to Terrace 3. Millirien was part of an Occupational Therapy class project that required her to spend 48 hours using a wheelchair.
By Kristen Tomkowid — Staff Writer
Published: May 2, 2013

Traveling from the Center for Health Sciences to the TC Lounge takes about five to seven minutes on foot, but the same journey may take four times longer for a person in a wheelchair.

Students in the Applied Interventions in Occupational Therapy class in the School of Health Sciences and Human Performance are required to spend 48 hours in a manual wheelchair as a part of their semester-long course.

“Our OT students brought in their perspectives and understand that it’s a growth opportunity,” Bradshaw said. “A part of it was what muscles do you use to propel the chair, and another part was how did you feel differently, how did things change based on how much time it took to get to class and those sorts of things.”

There are more than 15 staircases on Ithaca College’s hilly campus and about five ramps close to the stairs to help people with physical disabilities get around easier.

However, Dan Williams, adaptive technology specialist at the college, who uses a power wheelchair, said the campus is accessible to those in wheelchairs.

“It is surprisingly more accessible than you would think,” he said. “There are definitely ways to get around campus that just take a few minutes more.”

He said some of the ramps might be harder to spot. He also said there are more signs and more accessible entrances on the campus today, compared to in the past.

Ramps and alternative pathways take longer time than the roads most students use, but some of them are also falling apart. Senior occupational therapy major Matthew Pappadia, who was a part of the OT class project, said this makes them harder to maneuver for those in wheelchairs.

“The majority of ramps were cracked and caused my wheelchair to get stuck,” Pappadia said.

Milliren, also an occupational therapy major, said the roads, such as the one from Boothroyd to Towers, are not much better.

“Right outside the library on the way going towards Rowland, I hit a crack, and the rubber part of my wheel came off, and I had to get out of my chair to fix it,” Milliren said.

While in the wheelchair, Millirien said, not many people stopped to help her when she was having trouble moving around.

“I had a lot of people looking at me like, ‘what is this girl doing in a wheelchair,’” she said. “Not a lot of people stopped and helped. They would see me struggling with a door, and they’d just wait. I hear it’s gotten a lot better.”

Pappadia said he remembers struggling to get uphill while he was using his wheelchair.

“Pushing myself uphill, downhill and in and out of buildings were the most demanding tasks I faced in the chair,” he said. “I remember trying to get to the Fitness Center, pushing uphill as a tour group walked past. They smiled at me, I smiled back, as inside my head I was cursing and trying not to cheat the project. I was so frustrated I didn’t have the endurance to push myself that I had forgotten the tour group was right beside me. They stared at me, in shock, as I threw a temper tantrum, jumped off of the chair and pushed it the rest of the way up the hill. I believe that had been when the tour guide added that Ithaca College was completely wheelchair accessible.”

He said the 48-hour experience made him feel like a different person.

Jean Celeste-Astorina, a student disability specialist at the college, said she, along with Student Disabilities Services and the Office of the Registrar, try to move classes closer together to reduce the time it takes it takes to travel between them for the people with disabilities on campus.

“Sometimes what we might do is move a classroom in the beginning if the distance is far,” she said. “We want to make sure that the students can make it to their classrooms on time.”

Students said another obstacle is the doors. Both Pappadia and Milliren said some automatic door buttons do not work, causing them to struggle or rely on other people to hold doors open for them.

However, Williams said the switches are turned off at night when buildings are locked up, and sometimes workers forget to turn them back on.

Williams said people using wheelchairs should speak to employees at the Office of Facilities if there are malfunctioning handicap door buttons.

“The people from facilities and maintenance are really really wonderful … [but] they can’t do anything unless they know there is a problem,” he said.

Milliren said she also noticed that the Campus Center dining hall is the only handicap accessible dining area. The two others only have stairs into or out of the facility.

The Towers and Terraces dining halls require that people take stairs. However, Milliren said, though the Campus Center dining hall is the easier one to get into, it is also one of the hardest to maneuver. She said her choices for seating are limited because the tables were too cramped.

After her two-day experience, Millren said she believes campus is not wheelchair-friendly.

“Being on this campus in a wheelchair doesn’t work,” she said.