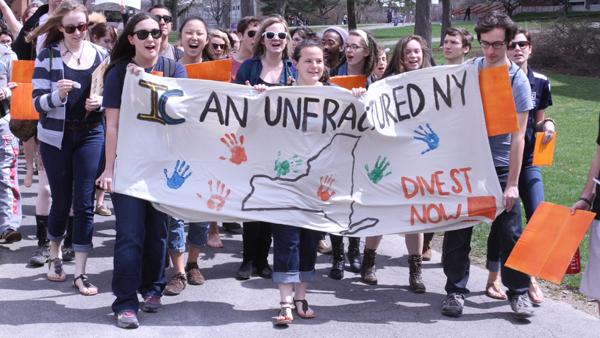 “Divest, divest, put fossil fuels to rest!” could be heard chanted from Free Speech Rock outside of Phillips Hall on Thursday afternoon as more than 70 students rallied for the college’s divestment from the fossil fuel industry.

The rally was coordinated by the Environmental Leadership and Action Networks, an organization made up of college students and community members who promote environmental justice, to present a petition with more than 1,000 signatures requesting full transparency regarding the current investment practices and a full divestment of the college’s $200 million endowment from the fossil fuel industry.

A wide range of speakers talked at the rally of the importance of the college divesting from the fossil fuel industry and becoming a more sustainable college. Junior Allison Currier, media coordinator for ELAN, said the rally was a way of showing the administration that the college community is interested in this issue.

“We are here for the long run,” Currier said. “We want to graduate into a future worth living for, we want to stand in solidarity with 250 other colleges and universities all working on divestment campaigns right now and we want to show that we are not going to stop.”

ELAN has been running their divestment campaign since Fall 2012, and hopes the rally and the petition will make an impression on the college’s Board of Trustees.

Freshman Rebecca Newman, a member of ELAN, said if the college is going to make a big deal out of being sustainable than it should live up to that reputation.

“The fact that Ithaca prides itself on being a sustainable school and makes a big deal out of our LEED certified buildings we should also preach that message in terms of their investments,” Newman said.

Speakers at the event included Alicia Swords, associate professor in the sociology department; seniors Devon James, who read an environmental poem, and Katerina Andersson, who spoke about why she protests against environmental issues. Dan Afpel, executive director of the Responsible Endowments Coalition also spoke at the rally of why students should be involved in this issue.

“We need to take control our endowment,” Apfel said to the crowd. “ If it isn’t going to help this planet, why should we invest at all? This is your money.”

After the rally, the crowd marched to the Peggy Ryan William Center to give the signed petitions to administrators.

ELAN asked their Facebook followers to change their profile pictures to an orange square for the next 24 hours. This is to represent to the administration that this is no longer just an environmental issue, but it is also a people issue, said Currier.

“We hope for people to join our weekly club meetings and get involved in divestment, and hopefully people get empowered and stand up for whatever is important to them on campus,” Currier said. “Get inspired and get involved. Youth is a really important sector of people and we can really make an impact.”