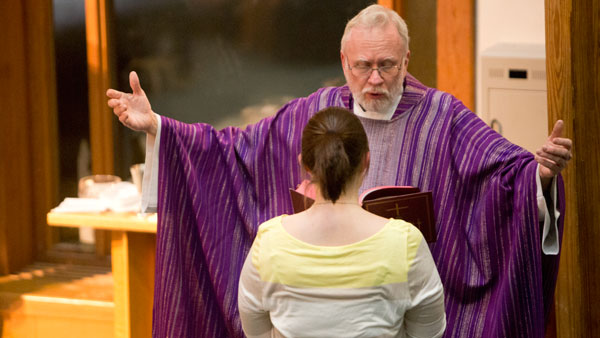 Pope Francis took to Twitter on March 13, acknowledging the one-year anniversary of his papal inauguration by asking his followers to “Please pray for me.”

A year earlier, the new pope approached his crowd of believers in front of the Vatican in March 2013 with a similar request of prayer. This year’s message is through a social medium that reflects his connection to younger audiences.

Andrew Bardetti, Catholic campus minister at both Ithaca College and Cornell University and a 2012 graduate of Boston College, said Francis’ practices have changed the way young people view the pope through his emphasis on personal connections and humanitarian service.

“I think he’s more popular because he’s accessible,” Bardetti said. “It makes it seem like we can engage on these issues and not have to shy away from them … In particular when you’re doing ministry on a collegiate campus, that’s what college is all about.”

The Rev. Carsten Martensen, Catholic chaplain and director at the college and Cornell, said he thinks there is more reflection on the papacy among youth because of Francis’ image on the covers of Rolling Stone and Time magazines and through technology and social media.

Speaking from the non-Catholic perspective, freshman Sara Yagan, who identifies as Muslim, said Francis seems to be attracting more youth. While past popes have never caught her attention, she said, she knows more about Francis through seeing his interactions with children and hearing about his tolerant expressions toward homosexuals.

“I know more about this pope, but I don’t know enough to be respectful of him and his religion,” she said.

Junior Rebecca Levine, treasurer of IC Hillel, said she thinks the pope’s liberal approach to social issues is more public than those of past popes, making the papacy more transparent.

“It’s more relevant now,” she said. “I didn’t really know much about it in the past. No one seemed to talk about it.”

Time has named Francis as the 2013 Person of the Year and described him with the phrase “the people’s pope” because of his insistence for humble simplicity as a Jesuit. His simple lifestyle is visibly present in his choice of attire, which is characterized by plain, white robes as opposed to the traditional luxurious wardrobe.

Dave Holmes, another Catholic campus minister at the college and Cornell, said as the first non-European pope in more than 1,000 years, Francis brings a new focus on poverty, rooted in his growing up in Argentina, to the center of the papacy.

“The spotlight is shining on the issues he grew up dealing with,” Holmes said.

Francis is formerly known as Cardinal Jorge Mario Bergoglio of Buenos Aires, Argentina, where the poor living in the capital’s slums celebrated the anniversary while watching a broadcast of an interview with the pope on a large screen set up in one of the villas.

This year also marks the 200th anniversary of the restoration of the Jesuits since their suppression by the governments of Europe in the 1700s, Martensen said. A more liberal Catholic sect, the Jesuit ministry revolves around missionary and education and generally does not assume any office within the church, which is why a Jesuit pope is unusual, he said.

Francis has acquired attention through his departure from traditional conservative behavior of the popes before him. As a Jesuit, Holmes said, Francis does not claim ownership over possessions — he has renounced the luxurious designer papal apparel, papal apartment and popemobile, choosing to travel in a used car instead to maintain his commitment to a simple lifestyle.

Senior David Howell, president of the Ithaca College Catholic Community, said this behavior is a significant departure from conservative popes such as Benedict XVI and John Paul II, who adorned themselves in traditional red shoes and lavish jewels. However, he said the pope has not specifically taken action to change the church dogma, only how it is presented.

“I don’t think Francis is radical enough because I think that changes really need to be done, and he is the pope to get them done with,” Howell said.

Bardetti said the pope’s commitment to simplicity and manner of communicating issues of social justice have been most impactful during the past year. He said rather than being outfront about his position on issues such as gay marriage and abortion, Francis has adopted an open approach to acceptance and has focused on serving the poor.

“I think he has a commitment to people who are suffering in any facet, and that is what I think faith communities are for,” Bardetti said.

The pope’s acts of servitude have also gained publicity in a different way — namely, his washing of the feet of two women at the Casal del Marmo juvenile detention facility in Rome on Holy Thursday in March 2013, which raised havoc among conservative leaders of the church. Not only is the foot-washing ceremony traditionally reserved for men, but one of these women was a Serbian Muslim.

“I think that’s certainly beautiful because you have to look at the symbol in this particular situation, and that is first of all that we are to serve,” Martensen said. “When you get down to wash someone’s feet, you really humble yourself.”

Junior Katie Ahrens, music minister of the college’s Catholic community, said she is most impressed with Francis’ outward display of humanitarianism and service, such as when he was reported to have been sneaking out of the Vatican at night in disguise to tend to the homeless in Rome in December 2013.

“When I read that he had been sneaking out at night to help serve the poor, it convinced all of my Catholic friends and me that we really want that man,” Ahrens said. “I was just really impressed and humbled that a man of his status in the church would say, ‘OK, I’m going to go out to the street and serve the people that need it most.’”

In an interview on the National Public Radio show “Tell Me More” on March 13, host Michel Martin raised criticism that Francis’ near celebrity status may overshadow his leadership responsibilities. Bardetti said he thinks the pope has nonetheless maintained a grasp on his humility.

“The fact that he sneaks out at night seems to me that he’s handling the celebrity status well,” he said. “I don’t think it’s inhibiting him.”

Martensen said the crowds in Rome have never been larger. Some people even call the pope a superhero, but Francis denies this, he said.

“He finds that even insulting, that he’s here to serve, he’s not the hero,” Martensen said.

Francis responded to a graffiti artist depicting him as a “superpope” in an interview March 5 with the Italian newspaper Corriere della Sera.

“To paint the pope as some sort of superman, a sort of star, seems offensive to me,” Francis said. “The pope is a man who laughs, cries, sleeps tranquilly and has friends like everyone else. A normal person.”

Ahrens said she believes the pope has made an impact in terms of how he presents the church’s central teachings in a different light, though the dogma itself has not changed.

Junior Matthew Boyce, an active member of the college’s Protestant community, also said Francis has remained true to the biblical ideas that do not condone practices like same-sex marriage, but the way he talks about them is much more tolerant than past popes.

“From what I know about him, he is progressive and is good about handling issues like gay rights and abortion with appropriateness,” Boyce said.

Ultimately, Martensen said, Francis has shown that caring for people is important, not the trappings and politics of the office.

“With all of the tensions and problems that our world has, we need someone who can speak to us and then challenge us to reflect on who we are as human beings,” he said.