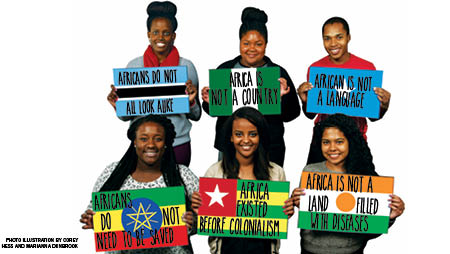 Ithaca College’s African Students Association is gaining international attention through a photo campaign they released to break down stereotypes commonly associated with Africa and Africans. The campaign follows the group’s theme for this year: “Celebrating our ancestor.”

The ASA devotes itself to creating awareness about Africa and educating students with campaigns and events, sophomore Rita Bunatal, public relations chair of ASA, said.

“We see so many times that students go to Africa, and it’s great,” Bunatal said. “But [you need to] have the education behind it, know the history of the continent before you go and ‘help the children.’ People need to be aware of the deep history in some of these countries.”

Photographs of members wrapped in vibrantly colored flags from different African countries saturate this campaign. Bunatal said the ASA came up with the idea of a photo campaign to engage the campus in a way that is simple and visual. Bunatal also said the students chose this idea because they felt this was a main reason for them being in the group.

“We decided to go with the flag concept because it is a common misconception that ‘Africa is a country,’ and people often wonder if ‘Africa has a flag,’ so we decided to break that stereotype without having to say much,” Bunatal said. “It was almost like a hidden concept. We also wanted to highlight the beauty and color of each country’s flag.”

Junior Makda Getachew, advertisement chair of the ASA, said the purpose of using flags has various meanings for each person. She said not only do the flags represent how the continent is made up of so many countries, but also that people are from these countries and are proud of it.

In addition to the photographs are quotes that each club member pictured had the opportunity to brainstorm. Bunatal said many of the members chose to refute ideas that they find most offensive as Africans. “Africans do not all look alike,” “Africa existed before colonialism” and “Africa is not defined by poverty” are examples of the responses to the stereotypes the ASA are striving to break through in its campaign.

“The simplicity of the text and complexity of the quotes are perfect together,” Bunatal said. “It’s powerful because it’s like I’m shouting at you, but in nice way. It’s a way of saying, ‘I’m proud of my country and continent.’”

Since the campaign’s release, about 4,000 people have viewed the photos, which were featured on CNN’s iReport.com after the ASA sent a tweet about its project to iReport’s Twitter account. Now, the campaign is gaining traction worldwide as people continue to share the campaign through social media.

Freshman Mariah Boucher, ASA photographer, has had her photos up on the ASA Facebook page for the public to see since Jan. 19. The group merely was looking for a person to take these photographs, not knowing they would go beyond the college community. Now, Boucher’s photographs have a global reach, with comments and shares from people in countries like Germany and Ghana.

“I am beyond stoked to see the numbers increase for views and shares on the iReport site,” Boucher said. “But to be honest, all I did was photograph amazing people. The ones you see in the pictures are truly making a difference, and I’m just honored that they asked me to be the one to capture this moment for ASA.”

Bunatal said the ASA is continuing to use social networking to spread its campaign further than iReport, and the group is finding that many people worldwide are interested in the project. Bunatal said she contacted a few news sources to spread the word as well.

“We have gotten a lot of amazing feedback on Twitter from Africans and non-Africans alike, proud that finally someone is correcting the misinformation about the continent and peoples of Africa,” Bunatal said.

The group has also worked to include non-Africans in the ASA and hopes that students can all come together to support the movement. The purpose is to both discuss many of the members’ African heritage and involve all students with educated discussions about Africa. Boucher said even with this, getting non-Africans to meetings and events has been difficult for the group.

“You do not have to be African to attend any of our events, and if you have an opinion, African or not, we want you to share it,” Boucher said.

Junior Kobby Lartey, vice president of the ASA, said in the future, the group wants to take this message farther by finding different ways to show its culture and educate others. The group plans to use feedback from this campaign to create new projects this semester.

“This campaign is not an isolated campaign, it is part of the vision of our association that is grounded in the hope to see the continent take its place in the world, for we have been ready to do so for too long,” Lartey said. “We hope to continue to create awareness, and continue on our Pan-African agenda. ASA is just beginning its work, and we are so happy with how far we have come.”