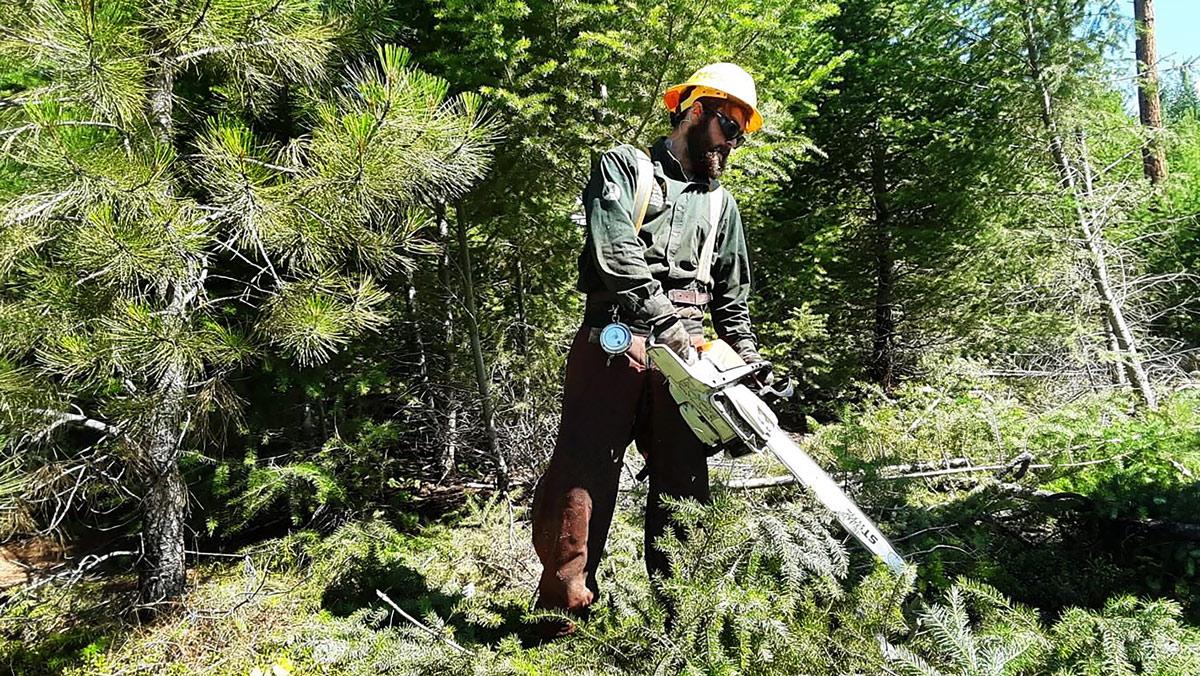 Courtesy of Charlie Winston
Junior Charlie Winston saws the branches of a tree while volunteering at the Montana Conservation Corps over the summer.
By Alyshia Korba — Staff Writer
Published: August 27, 2019

A young bear stood at a safe distance in the forests of Montana, watching as Ithaca College junior Charlie Winston hauled his chainsaw toward his target tree. He may have not known how to operate a chainsaw before this summer, but that did not stop him from joining Montana Conservation Corps.

Like Winston, many Ithaca College students spent their summer breaks giving back to their communities while volunteering across the globe. Approximately 20.8 percent of New York college students participated in volunteer work in 2015, ranking the state 49th in the country, according to the Corporation of National Community Service.

On the other side of the world, junior Emily Rosato spent her summer in south China teaching English to six– and seven-year-old children. She said that she wanted an inexpensive way to travel over the summer when she discovered Gotoco, a company that aims to improve understanding between China and other regions in the world. Accepted applicants to the program receive funding for housing, food and training.

Rosato said it was a good opportunity to explore another country while helping students learn more about other cultures. She worked with other volunteers from around the world as she taught physical education, art and cooking in English.

“I’ve never met so many people from so many different places,” Rosato said. “I think it definitely opens your eyes to different issues that are going on around the world.”

Sophomore Brynn Smith gave back to her hometown for the fifth summer by volunteering as a camp counselor for underprivileged and at-risk youth at Camp Discovery in New Hope, Pennsylvania. As a camp counselor, she was partnered with one youth deemed at-risk or less likely to transition successfully into adulthood, whom she mentors for the week.

“They can come to this camp for free for a week and kind of forget any problems at home,” Smith said. “You feel like you’re really bonding with kids and making a difference. Sometimes the counselors get more out of the camp than the kids because through volunteering you tend to meet a lot more people who are in different situations than you are.”

The camp gives Smith experience she will use in the workforce since she said she hopes to be a teacher. She said volunteering gives her the opportunity to try new things while she pursues her degree.

Don Austin, assistant director of community service for the Office of Student Engagement and coordinator for Service Saturdays and the Alternative Spring Break programs, said volunteering allows students to explore their passions and possible career paths while contributing to their community.

With the approaching 2020 presidential election, sophomore Vedant Akhauri hopped on the campaign trail volunteering for the Bernie Sanders presidential campaign. Akhauri spent the summer polling people through phone calls and texts for the Sanders campaign and joined three volunteer teams. On the texting team, he recruited support from voters, and on the event support team, he helped people plan campaign events such as debate watch parties. He also joined the friend-to-friend team where he taught people how to recruit volunteers.

Akhauri said he wanted to get involved with the Sanders campaign because it gave him the opportunity to make an impact in the election.

Working with other volunteers and voters taught Akhauri how to effectively work with people, he said. As a television-radio major, he said the skills he picked up while volunteering will help him in his future career.

“This taught me how to communicate with people, which is really important in the entertainment industry,” Akhauri said. “It teaches you how to cooperate with people even if you’re not from the same background.”

For Rosato, she said that she found a sense of belonging in an unfamiliar country with children who did not speak her language. Despite their differences, Rosato said she developed a connection with her students.

“I didn’t really know what I was getting myself into, but it was a really great experience,” Rosato said. “The kids were so much fun, and they were so curious about all the foreigners. I really miss them a lot.”

Austin said volunteer work is especially important for college students as they try to find their place in the world.

“It allows them to meet other students who also care a lot about community engagement and all those really important things that kind of round out the whole reason why we go to college in the first place,” Austin said. “Volunteering is an action that really kind of supports and helps us find and develop our sense of belonging at this really crucial stage in our lives.”