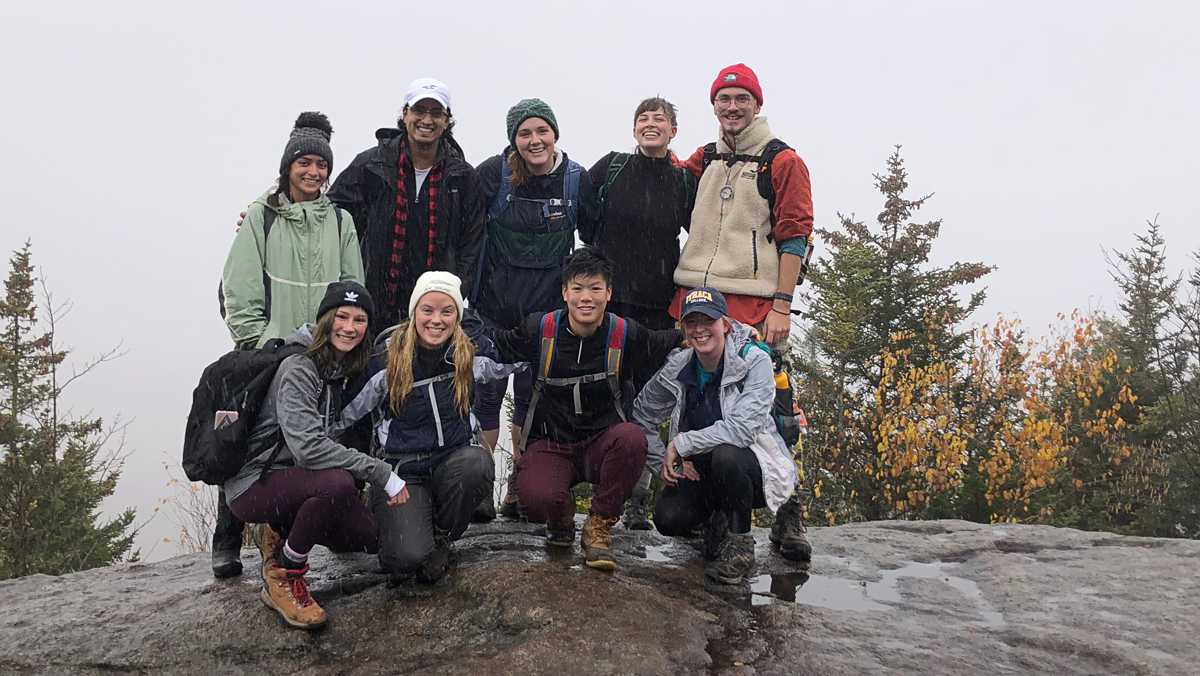 Courtesy of Don Austin
Over fall break, nine students traveled to the Adirondacks and five travelled to Buffalo to volunteer as part of the Alternative Fall Break program run out of the Office for Student Engagement.
By Julie Dannevig — Staff Writer
Published: October 30, 2019

Over fall break, nine students were given the opportunity to explore new surroundings and connect with nature in the Adirondacks through Ithaca College’s alternative break program.

“There are certain realizations I come to when I’m out hiking. … There’s something neat about no one else in the world knowing quite where you are,” freshman Ben Vajdos said.

For fall break 2019, Don Austin, assistant director of community service for the Office of Student Engagement and faculty adviser for the trip, said students were given the option to go to Buffalo, New York, to volunteer with the Food Bank of Western New York and Journey’s End Refugees Services or go to the Adirondack Mountains to work with the Adirondack Mountain Club.

Austin said that every academic year, the college’s Office of Student Engagement offers trips to different places over fall break as an opportunity for students to learn about new places and engage in community service.

He said any student at the college is eligible to apply for the program, but space is limited and differs every year. This year, out of 30 student applicants, only 15 were accepted between the two opportunities.

Each student was required to pay a $125 fee, which covered food, shelter and transportation for the trip.

Sophomore Desoni Cooper, who went on the trip to Buffalo, said she decided to apply for the program because it offered a more interesting and fulfilling way to spend the break, compared to going home for the weekend.

“It gives students a chance to discover new areas and new communities and to learn about certain issues that are going on in most communities,” she said.

Cooper said the group was taken on a tour of different neighborhoods in Buffalo, and the living conditions of the low–income areas surprised her. She said the impact of gentrification is prevalent in the area, and seeing it firsthand stood out to her.

She said that for most of the trip, the group volunteered at the food bank and helped to package and distribute food.

Austin said the Adirondacks group spent one night in the Adirondack Loj, a lodge in North Elba, New York, near Lake Placid, and two nights camping outside in tents.

“Some of my favorite trips through the years have been trips where students actually have to take that big step out of their comfort zone and learn new skills about being prepared and being ready to engage in a new environment,” he said.

The program volunteered in partnership with the Adirondack Mountain Club, through which students learned about the area’s nature and the environment. Junior Alex Perry said the group worked to clean drainage systems on the trail and learned about maintaining the parks.

“It’s not just about trails and re–creating, it’s also about thinking about the human impact on wild spaces,” Austin said.

Perry said he applied for the program because of his passion for camping and the outdoors.

“I thought it would be a really good experience to be around other people who enjoy nature and the outdoors and hiking and camping, and I really enjoyed being able to take a break from society for a few days,” Perry said.

Vajdos, an outdoor adventure and leadership major, said he saw the trip as a mental break following midterms.

“I have always had a really sentimental connection with the outdoors. … Behind it all, I feel like I belong out there, and so I felt like I needed to reconnect with nature,” Vajdos said.

“I definitely met some interesting people, both from the college and just in general, that I wouldn’t have gotten to know anyways,” Vajdos said. “I came to Ithaca for the outdoors, so to get an opportunity to be placed in the outdoors was really valuable.”