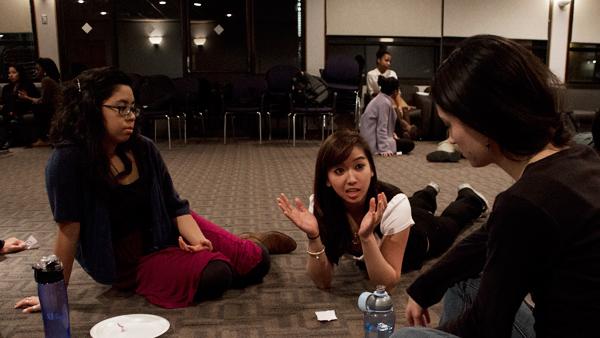 Students Active For Ending Rape opened the door for discussion among students Tuesday about sexuality and the stigmas and stereotypes that perpetuate rape culture and unhealthy relationships.

The first half of the event titled “Sex Behind Closed Doors,” split attendees into small discussion groups in Clarke Lounge in Campus Center, where members of SAFER asked questions to spur conversation about various sexual situations. Attendees were open when discussing their personal experiences and qualities of healthy and unhealthy sexual relationships.

Senior Jesse Maeshiro, co-president of SAFER, said the group’s mission is to educate students about ways to prevent rape and how to not support rape culture. According to SAFER, rape culture consists of sexual stereotypes that glorify men while deeming women to be sexual objects.

“Rape is a very heavy topic,” Maeshiro said. “It’s something that people see and shy away from and feel like they shouldn’t talk about. People don’t get to have the real discussions that they need to have that could prevent so many horrible things from happening.”

After discussing these issues in the small groups, the discussion groups merged to form a circle to elaborate on rape culture issues in a larger group setting.

During the discussion, attendees spoke about their interactions with sexual objectification, which is valuing a person only for sexual attributes and the stereotypes of their gender. Inequality among genders was the root of many sexist behaviors that the speakers experienced.

“The persistence of rape culture relies on the idea that men are hypersexual and women aren’t hypersexual,” Kayiza said. “[We] both, regardless of your gender or sexuality, are sexual beings. Acknowledging that in society and having open discussions like this, I feel, will lead to change.”

When addressing these issues, promoting gender equality and ending rape culture, junior Tariq Meyers said, men cannot be left out of the discussion because they are a part of the solution.

“Even if you don’t necessarily participate in [rape culture], you can be subconsciously reinforcing a lot of the stigmas that exist out there,” Meyers said.

Maeshiro said SAFER hoped to promote intersectionality among the student organizations that support equality for all people regardless of race, gender and sexual identity.

“We’ve been talking about intersectionality and how all forms of oppression are all connecting,” Maeshiro said. “Everything is related, and there are different issues on campus and different groups on campus, but really, in the end, I feel like we’re all advocating for the greater good of all people.”