Students approved for Birthright travel to Israel despite recent violence 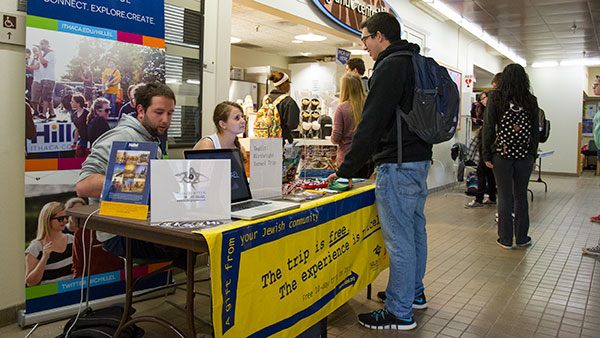 Jewish students at Ithaca College will be able to participate in the Birthright study abroad program to Israel despite the recent conflict between Israel and the Gaza Strip.

Taglit-Birthright Israel is an international non-profit organization funded by Israel’s Ministries of Education and Tourism and more than 14,000 Israeli philanthropists. The organization has provided 10-day heritage trips with all expenses paid for Jewish students from around the world every winter and summer since 1999.

Junior Sara Schwalberg said she and her parents were nervous about the recent conflict, but now that a cease-fire has been reached, she wants to take advantage of the opportunity to visit Israel for free.

“The conflict is a lot better than it was, at least in the middle of summer,” she said. “If the conflict was still that strong, I might not have gone.”

The war between Israel and Hamas-led militants stemmed from the abduction and killing of three Israeli teens in the West Bank in June, according to the Associated Press. Israel blamed the attack on Hamas and carried out a wave of arrests, which was followed by an increase in rocket fire from Gaza that prompted Israeli airstrikes and then a ground invasion. The fighting ended with an Egyptian-brokered cease-fire on Aug. 26.

A student’s eligibility is determined through interviews with Taglit-Birthright Israel, which determines if the student is of Jewish heritage.

Effective this summer, Taglit-Birthright Israel changed its eligibility policy to allow Jewish students who had previously attended high school trips to Israel to still be eligible for Birthright, Schwalberg said. This allowed Schwalberg and sophomore Brandon Schneider to apply for the upcoming winter Birthright trip. Schneider said he visited Israel when he was 15 years old as part of the B’nai B’rith summer camp he had attended since he was about 7 years old.

The Birthright itinerary includes visiting the Jewish Quarter of Jerusalem, swimming in the Dead Sea, hiking Masada, riding a camel in the Negev Desert and sharing dinner with Bedouins in their tents, Khokhlov said.

Khokhlov said the students travel from site to site on a dedicated bus with an armed security guard and avoid East Jerusalem, the Gaza Strip and the West Bank, which constitute Palestine.

Instead, Goodman’s group went to Jerusalem and Katzrin, a settlement in the Golan Heights, and painted murals.

“Some of the children wanted to see dancers and suns and just kind of symbols of hope, so we made a collage of their interests,” she said.

Students also visit Yad Vashem, the Holocaust memorial that honors the names of Holocaust victims and non-Jews who helped Jews escape genocide. Schneider said visiting Yad Vashem on his previous trip to Israel was a difficult but moving experience.

“It’s really scary and sad that something like that could happen and has happened,” he said.

Reisman said she attended Birthright last May as a staff member hired to assist a blind woman with autism on her Birthright experience.

“This was one of the first times they had a woman with disabilities on a mainstream trip,” she said. “It was really meaningful for me that she was able to experience all of the elements of Israel.”

Students on all Birthright trips also travel with a group of Israeli Defense Force soldiers for a few days, Khokhlov said.

Senior Danielle Jaffe said she was surprised how easy it was to communicate with the soldiers despite growing up in separate countries. The soldiers Jaffe met were the same age as she, but entered the military instead of university.

“It’s crazy to hear their stories knowing they’re the same age as us,” Jaffe said.

“We were there 15 minutes, and we probably heard 15 bombs go off,” Goodman said.

She said seeing the bombs changed how she understood the violence in the region.

“Coming from the United States, where we’re pretty darn safe, it’s really upsetting,” Goodman said. “But at the same time I was glad I was able to see it, although I wasn’t glad it was happening.”

Schwalberg said she wants to engage in political discussions while on Birthright to learn more about both Israel and Palestine.

Senior Marisa Rosenberg said Birthright made her feel proud of being Jewish, but also excited to see so many different people and cultures in Israel.

“It made the place feel real, and it also made me feel like this place is not scary,” Rosenberg said. “There are normal people with normal lives who do normal things there.”