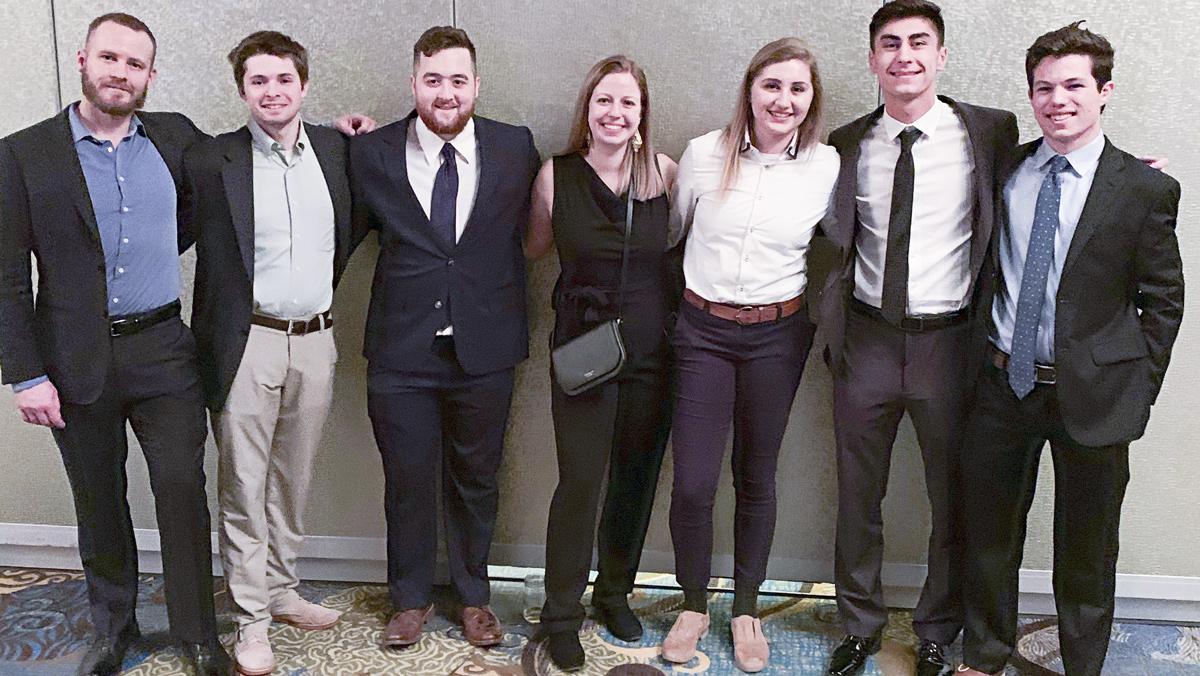 Courtesy of Emily Sabo
Senior Emily Sabo was one of 24 students, most of whom were upperclassmen, at the college who presented and attended the Eastern Athletic Trainers’ Association conference at the Foxwoods Resort Casino in Mashantucket, Connecticut.
By Anna De Luca — Staff Writer
Published: February 26, 2020

Senior Emily Sabo never saw herself pursuing research at graduate school after she finishes the athletic training program at Ithaca College. But after getting the opportunity to present her research on a unique gymnastic injury at the Eastern Athletic Trainers’ Association (EATA) conference Jan. 10–13, she said that she is contemplating changing her plans.

“I wasn’t super into research until this opportunity presented itself and opened up some doors,” Sabo said. “It’s made me want to possibly pursue further research at the graduate level in areas that I looked into for this research project.”

Sabo was one of 24 students, most of whom were upperclassmen, at the college who presented and attended the Eastern Athletic Trainers’ Association conference at the Foxwoods Resort Casino in Mashantucket, Connecticut. The conference gives students the opportunity to present the research they conducted outside the classroom and developed with faculty mentors. It is also an opportunity to network with professionals in the industry, said Paul Geisler, associate professor and program director of the Department of Exercise Science and Athletic Training.

The Ithaca Athletic Training Students’ Association pays for students to stay at hotels, and only students who are presenting research get free entry. Other students must pay between $110 and $130 to attend.

Senior Derek Hessing won the award for the 2020 Undergraduate Oral Presentation Research for his research about a rare, nontraditional sports injury.

The research was based on a performer in San Antonio who dislocated his patella, also known as the kneecap, while performing in the Bluecoats Drum and Bugle Corps marching band. With little existing research on the type of injury, Hessing said he looked into the injury rehabilitation process.

He said he did the research under Katie Sheehan, clinical professor in the Department of Exercise Science and Athletic Training.

Sabo won the award for the 2020 Undergraduate Poster Presentation Research for her research about a gymnast at the college with a rare bilateral fibular stress fractures injury.

She said the injury was rare because typically fibular stress fractures are only unilateral. The gymnast’s injury was the first bilateral fracture ever reported.

“We decided to look into it and see what might have caused it,” she said. “I learned about the importance of looking at all factors that may contribute to an injury from a biophysical aspect.”

She said she did the research under Chris Hummel, clinical professor and chair of the Department of Exercise Science and Athletic Training.

At the annual awards banquet, both Hessing and Sabo were presented with plaques and each receieved a monetary reward of $100 from the EATA Research Committee for winning their categories.

Geisler said he is on the research committee that reviews the abstracts students submit to present their research at the conference. The committee is also responsible for handing out grants and reviewing keynote speakers and topics, he said.

Geisler said it is impressive that students are winning awards for their research as undergraduates.

“Having done a peer–reviewed research project as an undergrad is huge,” Geisler said.

“Usually students don’t have that, and having won an award as the best in the category is a humongous resume-filler, if you will.”

Geisler said it is especially important for juniors and seniors to network at the event to advance their own career goals.

This is the second year in a row that senior Henry Heller attended the conference. He said the conference is a great opportunity to network with professionals, as well as students and faculty in the region, who attend the event. In particular, he said he was really excited to hear from newly inducted hall of famer Steve Donahue, who was formerly an athletic trainer for the Yankees.

“Every single major person in the athletic training field in district one and two are usually there,” he said. “It’s a two–and–a–half–day kind of explosion of athletic training, really. … I learned a lot by just going to the evidence-based practice stuff [and] listening to other people talk. You can do a lot of networking there.”