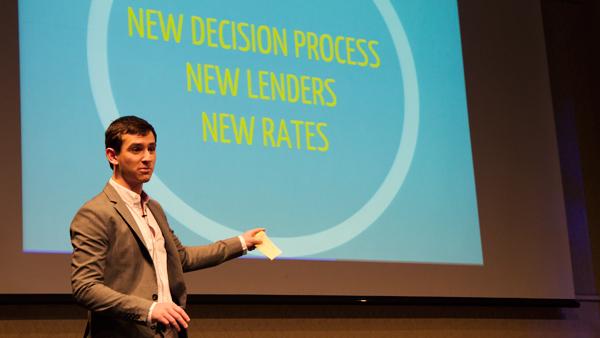 Jacob Beil/Courtesy of the Office of Marketing Communications
Sophomore Adam Unger gives a presentation at the Second Annual Business Idea Competition on Nov. 8. His idea focused on a new process for loans.
By Hayleigh Gowans
Published: November 15, 2012

After months of preparation, four teams of student entrepreneurs at Ithaca College may see their ideas become a reality with the help of $5,000.

Four teams won this prize during the Second Annual Business Idea Competition, sponsored by the School of Business, last Thursday in Emerson Suites.

More than 10 teams vied for the chance to win a portion of $55,000. The teams gave four-minute pitches to a panel of judges to determine how much money they should receive. The ideas presented in the competition were housed in three categories: health, product and services.

Out of those ideas, four teams — InsertHeels, Saleshop, The KettleShell and Opt-Ez — received a first-place prize of $5,000 per team. The remaining eight finalists will all receive funding to continue developing their ideas. Teams that finished in second place received $2,000. Third place teams were awarded $1,000 and fourth place teams received $500.

Other ideas in the competition included plans for a health and wellness club, a system to make food delivery more efficient and T-shirts that use e-ink technology to display graphics.

Chris Burch ’76, chairman of J. Christopher Capital and co-founder of the Tory Burch women’s fashion label, along with other local entrepreneurs, funded awards.

The panel of judges was comprised of Burch; Gregory Harts, president and CEO of Tompkins Trust Company; and Michael Axelrod ’91, partner at LiquidHub Inc.

This year, the judges made a decision to give four first-place prizes rather than the three they originally expected to give out.

Burch said the quality of the pitches made it difficult to choose only three first-place winners.

“We made a lot of progress this year,” Burch said. “We think over time it’s going to make more and more. I’ll be willing and other sponsors will be willing to give more money to the competition. The ultimate goal here is to teach [students] the toolbox of how to start a business and build a better business. We have a lot of good success stories already.”

InsertHeels and Opt-Ez won in the health category. InsertHeel is a shoe insert that helps stimulate sections of the feet to prevent patients with autism from walking on the balls of their feet. Opt-Ez is a kiosk business idea that gives accurate and fast eye exams.

Senior Mia Thomas, creator of InsertHeels, said she was surprised when she heard that she was named a winner.

“It definitely was something that I never do [public speaking], so it took a lot of strength for me to get up on stage,” Thomas said.

Saleshop, a business system that helps grocery stores reduce the amount of food waste by using strategic marketing, won in the services category.

Sophomore Jaclyn Cheri, who created Saleshop, said she got the idea because she had worked as a cashier at Wegmans and saw often that produce was not selling and was being wasted.

“This summer I was thinking of this idea and I got to campus in the fall and saw these posters everywhere for the Business Idea Competition,” Cheri said. “So I thought ‘I’ve been thinking of a way to improve the grocery shopping business, maybe this is my chance to talk about my idea.’”

The KettleShell won in the product category. The product is a rubber shell that transforms dumbells into a Kettlebell weight-lifting system, which helps users practice more natural weight-lifting movements during a workout.

Graduate student Tim Reynolds was chosen as one of the winners for his team’s idea for the KettleShell.

Reynolds said though he lost in last year’s competition, this year he felt more confident and was better prepared to pitch his story because of that experience.

“We had a good understanding of the format that was going to happen this year,” Reynolds said. “If anything, you sort of learn how to be a better presenter in all facets of life, because you have to summarize stuff in four minutes and present it in the most clear way possible.”

Reynolds said he will use the money he received to obtain a patent for his product and continue testing.

Seniors Gianna Bersani and Alex Comstock, creators of Opt-Ez, were also involved in the competition last year and felt they had improved a lot for this year’s presentation.

“We did the competition last year and didn’t make it out of the first round semi-finals,” Comstock said. “Since the competition [last year], we had been thinking about what we were going to do this year. The idea started out as an app but turned into what it was we pitched, and we felt really good about it going in.”

Axelrod said he thinks the competition is growing, and the students were able to really articulate and present their ideas well compared to last year.

“It separates Ithaca from other colleges,” Axelrod said. “It gives students, regardless of their major, an opportunity to learn about business, learn about starting a business and learning about what it means to be an entrepreneur.”

Cheri said she would encourage anyone, regardless of major, to enter the competition if they had a business idea.

“If you think you have a great idea, talk to people about it and see what they think, and you might find that you really do have a good idea,” Cheri said. “And that’s a really empowering thing.”