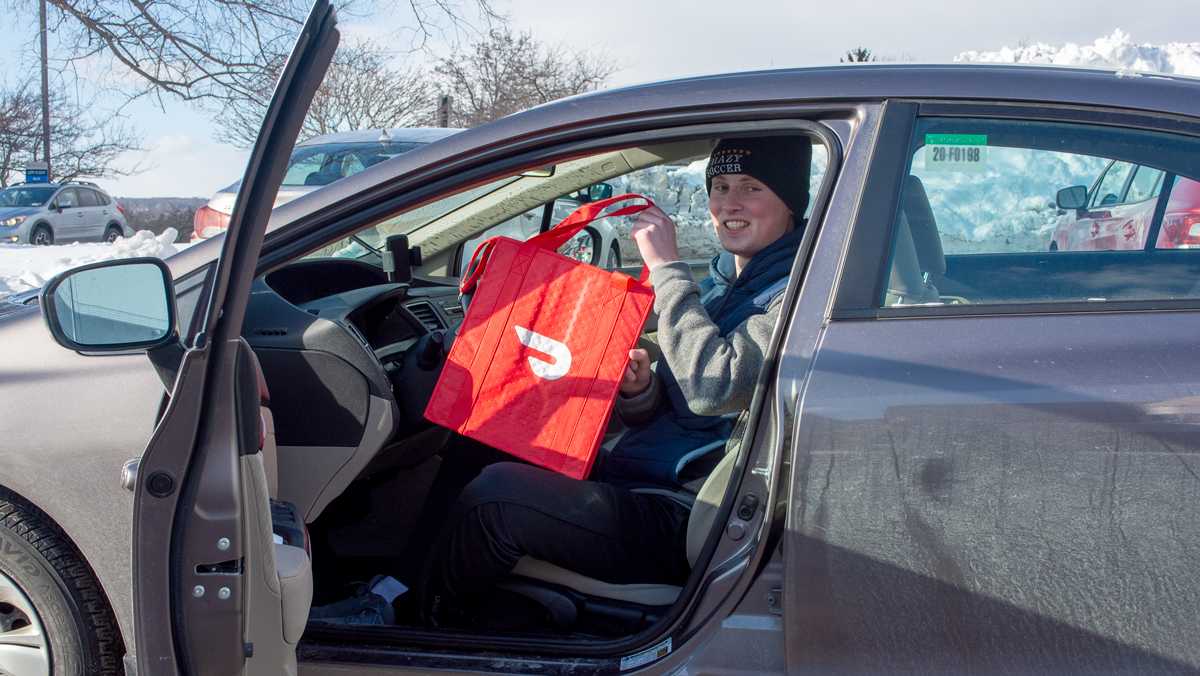 Eleanor Kay/The Ithacan
Too busy for a tradition job, freshman Ben Norcross has been delivering food to customers through the app Doordash since the beginning of Spring 2020.
By Julie Dannevig — Staff Writer
Published: February 26, 2020

Many college students struggle to fit jobs into their already loaded schedules. Ithaca College students have turned to a favorite food delivery app, DoorDash, as a way to make money on their own time.

Created in 2013, DoorDash offers customers a simple method of ordering food from a list of local restaurants. Licensed drivers over the age of 18 can sign up to be food deliverers, referred to as a “Dasher.” The customer pays for the costs of their meal and a delivery fee, which changes depending on the availability of drivers, how busy and how far away the restaurant is.

Restaurants that do not traditionally offer delivery services, like Wendy’s and Waffle Frolic, are available through the app. Competitors like Postmates and Uber Eats are also offered in Ithaca, but delivery fees and restaurant availability differ across the services.

Freshman Ben Norcross said he started “dashing” at the beginning of Spring 2020. He said he was in need of a source of income to help to pay for his tuition and everyday expenses, but he struggled to find enough time for a job. Becoming a Dasher is more convenient, he said, because of the job flexibility.

“[DoorDash] is a way to get a little extra money,” Norcross said. “It gives you a lot of freedom of when to work rather than having distinct, set hours. I like that I don’t have a boss to report to, and I can work as little or as much as I want each week.”

Norcross said that he originally used DoorDash as a customer and frequently ordered meals to his dorm from local restaurants in Fall 2019. He said that he decided to become a Dasher when he brought his car to campus in the spring.

“[Dashing] has helped me with my time management skills, and I’ve actually started to use the free time in my daily schedule more effectively,” he said.

Freshman Sam Liebman said that he signed up to be a Dasher in Spring 2020. He said the application process was easy and required a background check, proof of a valid license and car insurance.

Liebman said he makes approximately $25 per hour when he dashes on weekends. He said he mainly works as a way to earn extra spending money.

“Choosing your own hours is a big positive, and it’s pretty good for extra cash,” he said. “Driving around is also really nice. It’s relaxing, and you don’t really have to deal with anyone.”

At the college, DoorDash offers delivery from restaurants like Chipotle, Bella Pizza and Old Mexico. Freshman Dani Adler said he uses DoorDash to have food delivered to his dorm regularly.

“[DoorDash] makes it really easy to get food quickly and pretty inexpensively,” he said. “I don’t have a car here, so I can’t just go out and get food whenever I want.”

Adler said that if he had a car on campus, he would consider becoming a Dasher.

“I trust DoorDash a lot,” he said. “I’ve never had a serious problem with their delivery. There are a lot of restaurant options to choose from, and the app is really user–friendly.”

Norcross said that dashing is a quick way to make money but that there are negative aspects of the job as well. He said he will likely be looking for a more traditional on-campus job in the future.

“One of the negatives to DoorDash, there are a few actually, is you have to use your own car, so more miles go on your car and you have to pay for gas,” he said. “Also, being on the roads more might increase the chances of a car accident or something.”

Grubhub to come to Towers Marketplace