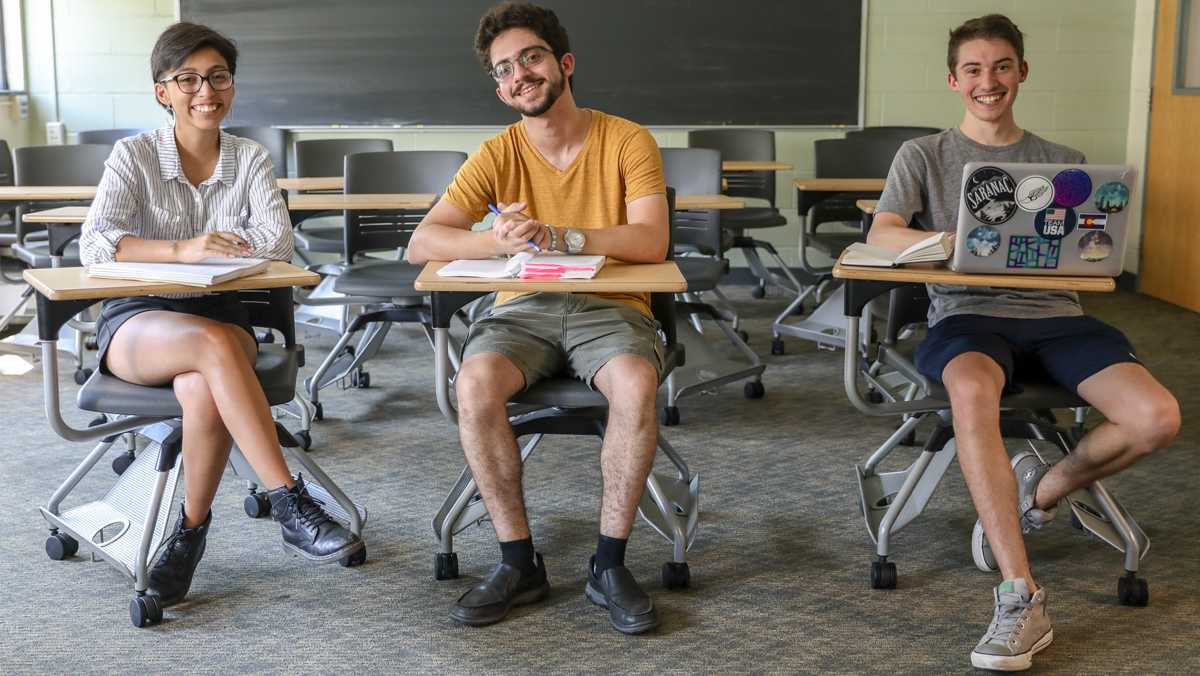 Ironically, junior Alexander Massoud spent most of his summer in a windowless room in the Center for Natural Sciences at Ithaca College. While his main goal was to conduct research about the Small Magellanic Cloud galaxy for his project in the Summer Scholars Program, he also used the opportunity to make sure that research was something he wanted to do for the rest of his life.

“I knew that I wanted to do those things, but I never had an intensive research experience like this before to confirm if I could be happy in that kind of environment,” Massoud said. “I was very satisfied to find that I enjoy it.”

Massoud was just one of 82 students who took part in the Summer Scholars Program this summer. Now in its fourth year, the program allows students with majors in the School of Humanities and Sciences to conduct paid, full-time research. Students can either work on independent projects by proposing original research topics or assist professors on faculty-led projects, Rachel Balzano, program specialist in the School of Humanities and Sciences, said.

She said the goal of the program is to provide students with hands-on research opportunities and to improve confidence in students’ academic achievements. Additionally, she said doing the program over the summer allows for students to have a more focused, fieldwork-like experience.

“You get to have this wonderful experience where you don’t have to worry about your other classes and getting all of your work done and can actually focus on a project that means something to a student,” Balzano said.

Senior Matthew Palmeri, whose project analyzed architectural patterns in urban settings compared to patterns in nature, said the program allowed him to explore interests beyond his major. He said he chose his topic because he has always had an interest in architecture.

“It’s been a lot of reading and just looking at other people’s art to get a footing of what I want to do, which has been eye-opening because we don’t get to do this breadth of research for school projects,” he said.

Massoud said that having so much time to work on his project was a challenge at times because he would get overwhelmed by all of the information he could research.

“Research feels like this infinite thing,” Massoud said. “Because it’s all there and it’s all available, especially in the summer compared to the semester, you get tempted into overexerting yourself into this one specific area. There’s only so much you actually need to know to complete the project and be able to explain it to others.”

Palmeri also felt overwhelmed by the immense amount of information he could research and plans to continue his project in his free time. Similarly, junior Andrea Yzaguirre, who researched the representation of monsters in versions of Sinbad the Sailor, said she plans to turn her project into an independent study because she feels that she has only scratched the surface with her research. Yzaguirre said she came into the program knowing that she loved research, but she got to learn more about her work habits.

“I discovered that I really should not research all day long because I get easily distracted,” she said. “You really can’t do the same thing for nine hours straight, so I had to learn how to take breaks.”

This year’s group of students who pursued independent projects in non-STEM fields is the largest cohort the program has seen so far — 23 students participated in total. Balzano said the program has evolved over the past year to help enhance a sense of community among the scholars by providing on-campus housing, assisting with meal plans and helping send students to conferences relevant to their research.

“It can feel very alienating when you’re working on your own project, so being able to foster this community for students really helps them,” Balzano said.The program allows students to not only connect with fellow scholars but also faculty members.

Yzaguirre said that her faculty mentor, Katharine Kittredge, professor in the Department of English, helped her narrow down her broad research topic of children’s stories by helping her look through archives in the library.

Similarly, Massoud said he grew closer to both the faculty and other students in the physics department through the course of his research.

“You get a sense of belonging,” Massoud said. “You feel a little less removed from the department once you’re there for the entire summer.”

Palmeri said the program has given him the confidence to pursue his interests.

“It taught me a lot about myself and the options that I have available to myself,” he said. “I didn’t consider that I could possibly work on my own stuff that’s interesting to me and have other people resonate and respond to it as well as they have.”