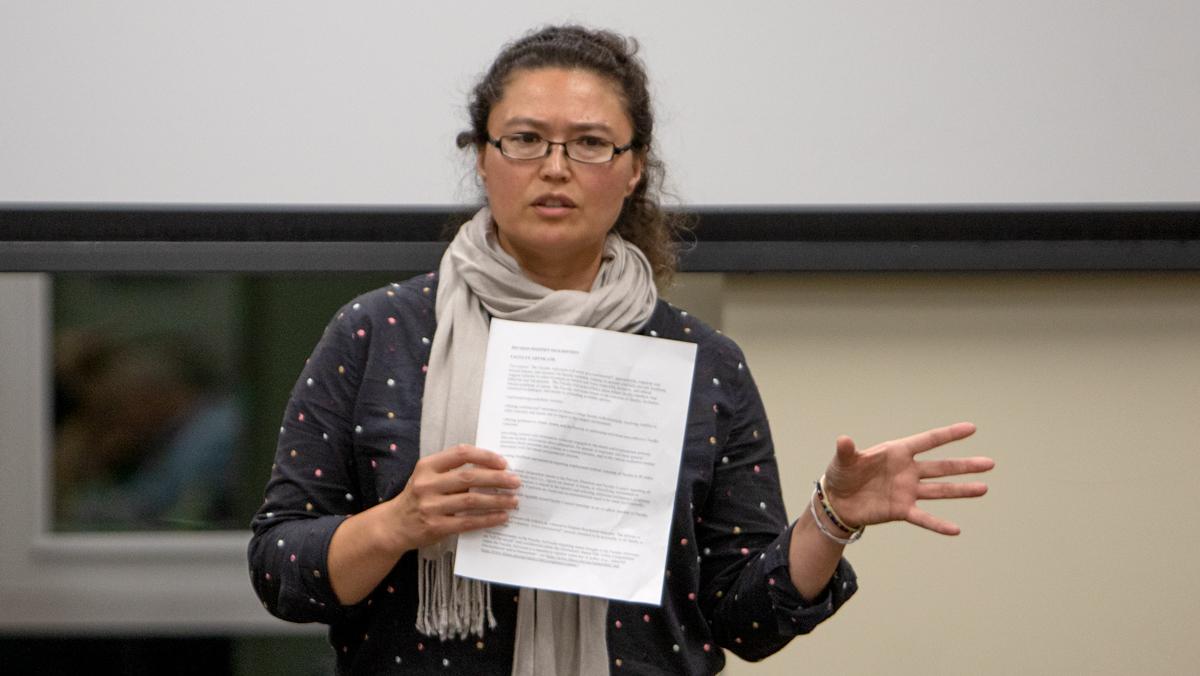 Maxine Hansford/The Ithacan
Sue-Je Gage, associate professor in the Department of Anthropology, spoke to the Faculty Council about the creation of a faculty advocate position during its Oct. 1 meeting.
By Skylar Eagle — Contributing Writer
Published: October 2, 2019

The Ithaca College Faculty Council met Oct. 1, and members discussed the future of summer sessions because the college lost $250,000 in revenue following the decision to increase the tuition discount for summer session courses.

The Offices of International Programs and Extended Studies announced in January 2019 that summer and winter undergraduate tuition rates would be discounted by 30% from their original rate of $1,319 beginning during the summer 2019 session. The college charged $1,056 per credit for most academic programs and online courses for the summer and winter sessions.

Jennifer Wofford, director for the Office of Extended Studies, told the Faculty Council about the loss in revenue. Wofford previously told The Ithacan that the decision to increase the discount was a result of analyzing student success rates and retention rates at the college. She said she expected to see an increase in enrollment for the summer session after the discount.

The college offered 65 undergraduate courses during the summer 2019 session, and 316 undergraduate students were enrolled in summer session courses, a number that is a decrease from past years. Wofford told The Ithacan in January that on average, 500 undergraduate students register for summer courses each year, including internships, fieldwork, private lessons and independent studies. Wofford said, in total, 475 students engaged across all summer credit-bearing experiences including internships, fieldwork, independent studies, alongside courses.

She said the Office of Extended Studies is looking to change the roster of courses offered over the summer to incorporate more high-demand courses, including Integrative Core Curriculum requirements and classes required for certain majors and minors.

Jason Harrington, associate professor in the Department of Media Arts, Sciences and Studies, said the college should not have a core curriculum program that requires students to fit in a summer semester in order to graduate on time.

“My problem is that we created a gen ed program that we can’t satisfy, and now, the college is making money off offering classes in the summertime,” Harrington said. “And students need to take these classes, and they can’t fit them into that four years, and I think that’s unethical.”

Phil Blackman, assistant professor in the Department of Accounting and Business Law, said he agreed that the ICC should not be forcing students to spend extra money for summer semesters in order to graduate on time.

“If our curriculum is forcing our students to spend an extra $3,000 for the summer, we have failed at our moral obligation to our students,” Blackman said.

Wofford said that students who take summer courses tend to enroll in ICC requirements and individualized studies, including internships and study abroad programs.

The Faculty Council also discussed the creation of a faculty advocate position.

The faculty advocate would be responsible for reporting incidents of bias, discrimination and sexual assault among faculty to the provost through an annual report. Sue-Je Gage, associate professor in the Department of Anthropology, said the annual report would present general statistics on reported incidents among faculty every academic year.

Gage said the report would include the total number of cases, which would be separated by school, professor rank and area of concern. It would also display faculty advocate observations of different patterns and trends across departments as well as recommendations for the college based on the reports received.

She said the faculty advocate would be required to discard all reports after entering them in the annual report, which would display all cases anonymously. Gage said she would like to see the annual report shared with the entire campus community after it is presented to the Faculty Council with the provost present.

Correction: A previous version of the story said “Wofford said 475 students worked in more individualized experiences including internships, fieldwork and independent studies in addition to courses. She said this matches the trend of overall lower enrollment at the college.” The story has been corrected.