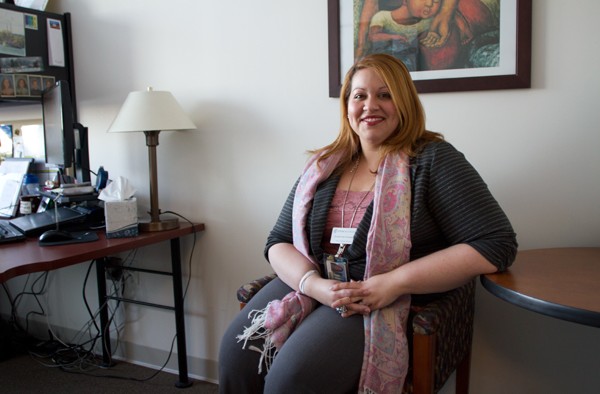 Shawn Steiner/The Ithacan
Michelle Rios-Dominguez, senior recruiter for diversity and community outreach at the college, said discussion of such a sensitive topic requires a diverse group that cares about the issues. Talking Circles are a forum for such discussions.
By Michael Tkaczevski — Staff Writer
Published: February 7, 2013

“When was the first time you learned about race?” This was one of questions asked Tuesday and Wednesday at the Talking Circles on Racism, in which students, faculty and staff tackled controversial topics surrounding race.

The Talking Circles were created to provide a safe space for students, faculty and staff to share their own experiences and learn more about the complex and emotionally-charged issue of race. Members not only vary in racial, ethnic and cultural identity but also in how much they deal with racism in their daily lives.

Paula Ioanide, assistant professor of the Center for the Study of Culture, Race and Ethnicity, said racist microaggressions, which are subtle remarks influenced by subconscious or unintentional prejudice, can make non-white students feel like outsiders in the community.

“[There are] white folks who really do want to learn about this stuff but consistently have no spaces in which to figure out how to speak the language of consciousness and awareness about how racism affects them,” Ioanide said.

This is the second year the Talking Circles are taking place at Ithaca College, sponsored by the college’s Diversity Awareness Committee. Last year there was only one circle composed of students, but this year there is another circle for faculty and staff. The students meet on Tuesdays and the faculty and staff meet on Wednesdays. The initiative will continue for the next four weeks.

The Circles initiative was established in 2007 by the Multicultural Resource Center, a nonprofit organization based in Ithaca, to bring people of all races, ages and walks of life together to discuss race and racism in Ithaca and American society.

Audrey Cooper, the director of MRC and a Cherokee, said Ithaca is no stranger to racist incidents, even as recently as 2006. Cooper said Ithaca is a microcosm of American society in which racism is an uncomfortable but real cause for strife in the community.

“These things exist. Racism exists,” Cooper said. “Fear is a big [problem]. The fear of other people because of stereotypes.”

Cooper contacted Laura Branca and Kirby Edmonds, the managing partners of Training For Change Associates, which designs and leads workshops on racial and cultural communication, in 2007 to create a solution to racism in Ithaca. They organized and facilitated the first Talking Circle in 2008 and were inspired by its effect on the participants. There have been at least 50 community circles since then in Ithaca.

“I see those who’ve been to the Talking Circles … have such a better understanding and are better allies to people of color,” Cooper said. “Before, people really didn’t know how to go about doing that or wanted to be politically correct. So we’re seeing a lot of headway. I think the Talking Circles on Race and Racism has had a real positive impact on the community.”

The circles are confidential, and the members don’t interact with each other. Members of each group discuss personal experiences and questions posed by a facilitator. Ioanide said the students discuss racism in peer relationships, while the faculty and staff discuss racism in the professional environment.

“We, the DAC, wanted to move away from the kind of talking-head, one-time event on diversity or issues of racial diversity or race and racism,” Ioanide said. “Instead, we wanted to have a setting for a sustained conversation because often a two-hour workshop or talk is not sufficient time for people to really process what these issues really mean in their own lives.”

“Often people report that they stayed up late talking to their partner, or they were riding home with someone from the circle and they had a deep conversation,” Branca said. “There’s a process that begins in the circle, but then it spills out into people’s social lives.”

Mark Coldren, associate vice president of human resources, said the promotion of diversity is one of the college’s main goals as part of IC 20/20. Coldren, who is a member of the faculty and staff circle, said there’s more to campus diversity than just demographic numbers.

Such a sensitive topic requires a diverse group of people who care about the issue of racism, Michelle Rios-Dominguez, senior recruiter for diversity and community outreach at the college, said.

“Everyone knows about race,” Rios-Dominguez said. “It’s very personal. At the very least you know about your race. We all are experts at the matter. Sometimes it can feel intimidating. It can feel like people of color are the ones who are the authorities. … We all represent diversity. It’s a balance keeping in mind that there are different experiences, but they’re also shared experiences.”