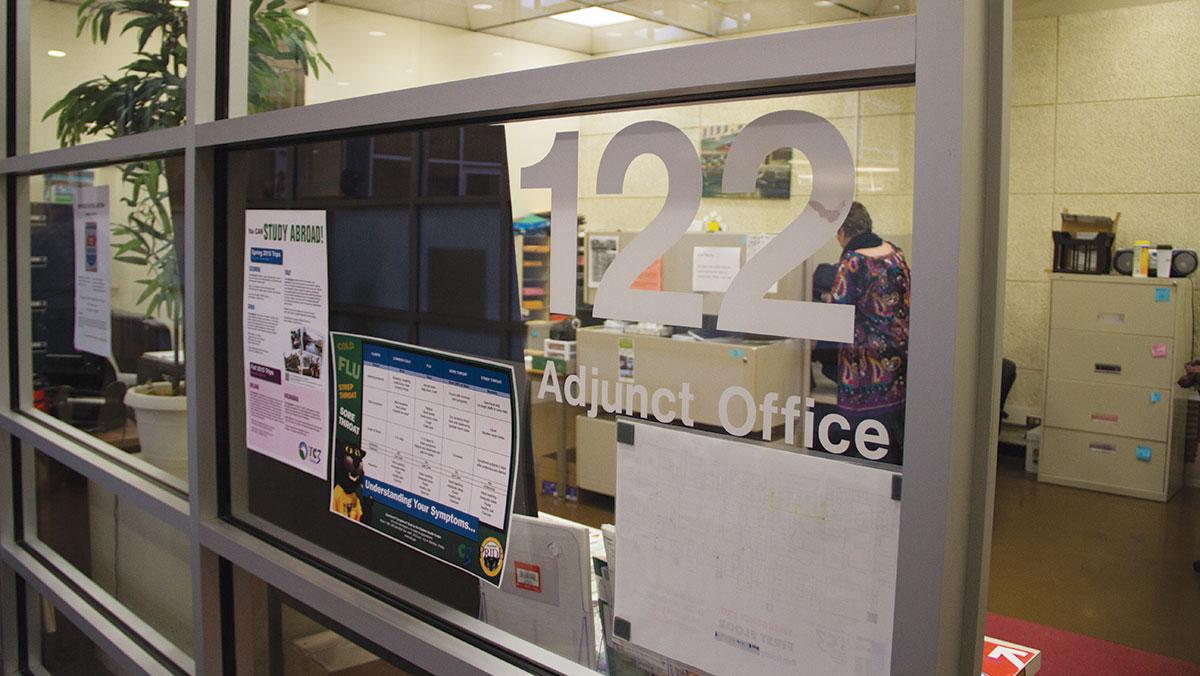 Corey Hess/The Ithacan
Over half the courses at Tompkins Cortland Community College are taught by adjunct professors, according to adjunct instructor Cynthia Coleman.
By Evan Popp — Staff Writer
Published: November 12, 2014

The push by a segment of part-time instructors at Tompkins Cortland Community College to form a union is still without resolution, as no decision has been made by the TC3 administration on whether to voluntarily recognize the unionization request. John Conners, provost and vice president of TC3 said a decision will be made on the issue in the next week or two by the president of TC3, Carl Haynes, in consultation with the TC3 Board of Trustees.

Under New York law, TC3 has a month to either voluntarily recognize the unionization request or ignore it. If TC3 ignores the request, hearings on the issue will be held in front of the New York State Public Employment Relations Board. The TC3 Adjunct Association, a group formed by the part-time faculty seeking a union, notified the administration of its request to form a union on Oct. 22, making the deadline for the college’s response Nov. 22, Conners said.

Adjunct faculty are on the rise at colleges across the country. In April, The Ithacan published a story examining the increasing number of adjunct faculty at Ithaca College. According to the article, from 2004–13, part-time faculty increased by 67 percent at the college, dwarfing the full-time faculty level increase of 11 percent during that time. The article reported that as of the 2013–14 school year, nearly 38 percent of the faculty worked on a part-time basis.

Conners said Haynes is weighing a number of different factors before making his decision whether to voluntarily recognize an adjunct union.

“It’s a big deal to have a new bargaining unit on campus,” he said. “We have three unions already in existence, and once a union takes shape, that’s a legal entity, and you enter into contracts with it, and it’s a really major determining factor on people’s working conditions and salaries.”

One of the major factors the administration is focusing on is whether the TC3 Adjunct Association really represents the majority of adjunct instructors at TC3, Conners said. While the TC3 Adjunct Association said over half of the adjunct faculty at TC3 have signed authorization cards requesting the formation of a union, which under New York law would allow the group the right to organize, Conners said the administration has yet to see definitive proof of the association’s assertion.

“If the union is going to come into existence, we want to be confident that it is supported by the majority of people it wants to represent,” Conners said.

The TC3 Adjunct Association website lists just over 100 TC3 Adjuncts who have publicly put their name down in support of unionization. However, Conners said the number of people on the list does not equal a majority of the 258 adjuncts at TC3.

Earle, who is in favor of having an adjunct union, also said that when the Adjunct Association was collecting signatures for unionization cards, they didn’t provide the administration with the list of signees because of confidentiality concerns, although he said the group has submitted information to PERB indicating that the association has the support of the majority of TC3 adjuncts.

Cynthia Coleman, a TC3 adjunct instructor in sociology and another supporter of the unionization movement, noted that adjuncts are the only group at TC3 not represented by a union.

“It seems to be to our disadvantage in terms of paid benefits and job security, and we’ve decided that having a union would be a way to have a voice,” she said, noting that 56 percent of courses at TC3 are taught by adjunct instructors.

She added that the group does not view the administration as the enemy in this issue.

“We don’t really see ourselves as an opposition to the college,” she said. “We really think that if we join everybody else at the college in being unionized, it will be good for the college.”

Earle said there is a variety of different things adjuncts are seeking through their fight to unionize. He said these include increased job security — adjuncts at TC3 currently work on a semester-long contract — as well as pay increases and access to employee-sponsored benefits, including health insurance, which Conners confirmed adjuncts do not currently receive.

Coleman said the minimum starting salary for an adjunct at TC3 is $2,640 for a three-credit course, while the highest salary for adjunct instructors is $3,400 per three-credit course. However, she said adjuncts are limited to teaching a maximum of three courses per semester, limiting their earning potential.

Coleman added that one of the difficulties of being an adjunct instructor is the lack of ability to predict the work available each semester.

Coleman said she and many of her adjunct colleagues are forced to teach at many different institutions to make ends meet. Coleman said she has taught at many of the colleges in the Tompkins County area, including Ithaca College and Cornell University.

“Trying to support my family on an adjunct salary is very difficult,” he said. “This semester I’m teaching six classes at two institutions in addition to tutoring just to make things work. I hope to have that amount of work again in the spring, but from time to time, especially over holiday seasons … and over the summertime, it becomes very challenging.”

However, he said making ends meet is not the primary focus of the unionization movement.

“For all of us, the major thing we’re seeking is a common voice,” Earle said.