“So much depends on the table,” said Michael Rogers, as he walked through the Center for Natural Sciences’ new “smart classroom.” 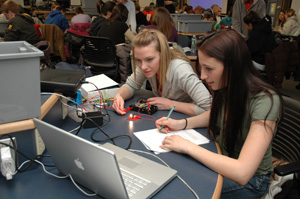 The Performance-Based Physics Lab, designed by Rogers and other professors in the physics department, opened this fall. The classroom, which cost $750,000, was converted from two classrooms and two storerooms.

Wanting to offer students more hands-on experience, Rogers said the performance-based laboratory is important because lower-level classes are more oriented toward “hands-on science” that can be fostered by a rich multimedia experience.

Eight projector screens line the walls surrounding 11 circular tables, each seating nine students. At the center of each table is a drawer for storage, power outlets for laptops and a headphone jack with a nine-pronged splitter. The Department of Physics received a three-year $150,000 grant from the National Science Foundation in December to develop a curriculum that will take full advantage of the lab.

The room, which seats 99, also features two central control panels that are connected to a Dell PC, MacBook Pro, DVD player, VCR and a document camera that displays live video. There are also A/V and laptops ports, light controls and a lapel microphone.

Though the Rensselaer Polytechnic Institute was the first university to feature a performance-based physics lab, Ithaca College’s lab is based on North Carolina State University’s, designed for a greater number of students, Rogers said.

Because the tables are circular and the teacher control panel is located in the center of the room, there is no one “front” of the room. Attention is drawn toward the projection screens, which engage the students in media, Rogers said.

The college has 114 “smart classrooms,” each featuring a ceiling-mounted projector and a station that contains a PC, Mac Pro, DVD player and VCR, spread across campus in every academic building. David Garcia, associate provost, said the media components of the rooms help professors teach in a style that suits them.

“What it allows faculty to do is innovate pedagogically in a number of ways,” he said.

The college plans to put “smart” technology in every classroom before next fall, Garcia said.

include the Center for Trading and Analysis of Financial Instruments, located in Smiddy Hall, and the Arnold and Lucy Broido Classroom in the Whalen Center. Both offer tools specific to business and music, respectively.

Sophomore Kelly Halpin was one of the first students to experience the lab in Fall 2006. Having taken classes in lecture halls his freshman year, Halpin said it is easier for the professor to move about the room and address the specific problems students may have.