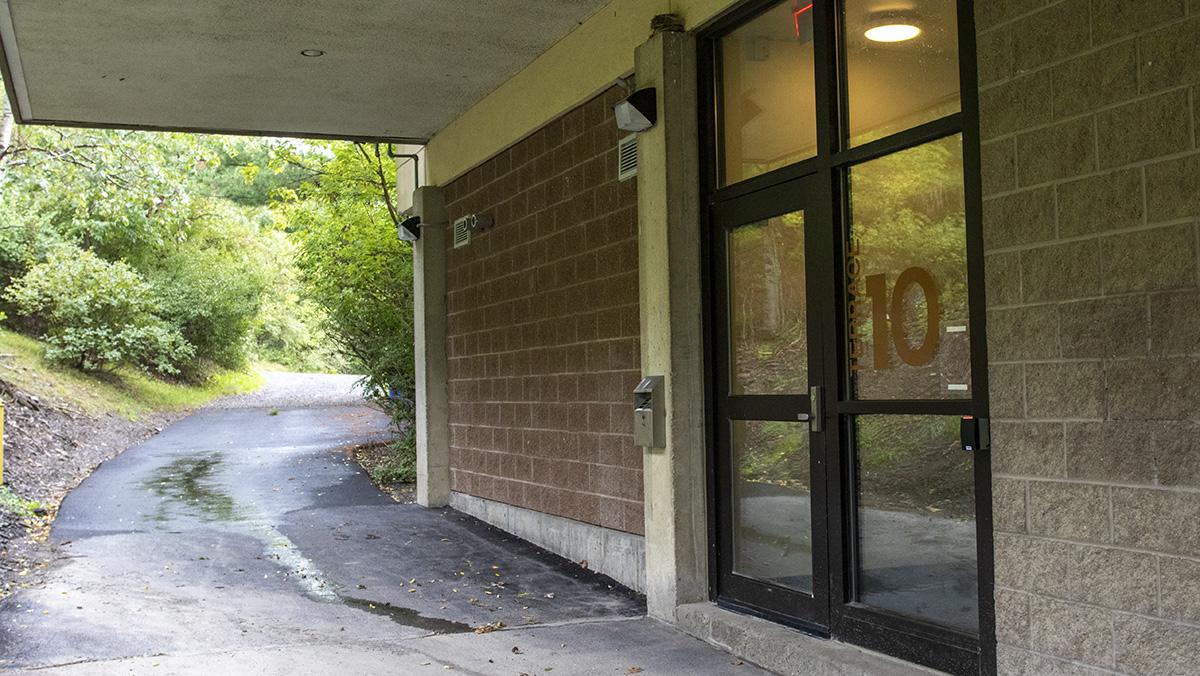 David Tillinghast/The Ithacan
Jeff Golden, senior director of Auxiliary Services, said Terrace 10 was scheduled to be closed for the 2022–23 academic year for maintenance work, but the work was finished early, leaving the building empty and able to be used. Golden said when the work finished, his team decided to rent out rooms in Terrace 10 to employees on campus who needed housing.
By Liam McDermott — Contributing Writer
Published: September 28, 2022

Because of staffing shortages at Ithaca College and high housing prices in Ithaca, the college’s Terrace 10 residence hall is being used to house college employees and as a hotel on heavily populated weekends in Fall 2022.

Jeff Golden, senior director of Auxiliary Services, said Terrace 10 was scheduled to be closed for the 2022–23 academic year for maintenance work, but the work was finished early, leaving the building empty and able to be used. Golden said when the work finished, his team decided to rent out rooms in Terrace 10 to employees on campus who needed housing. According to the college, the price to rent a room at Terrace 10 is $100 per night for a single unit, $125 per night for a double unit, and $150 per night for a quad room and $600 per month for individuals staying long term. Golden said there are 10 long-term rentals available in Terrace 10 and currently the residence hall is only being opened as a hotel for Family Weekend on Oct. 1 and 2.

Golden said the college has been trying to find solutions to provide affordable housing for employees at the college. According to Rent Data, the fair market rent for a two-bedroom apartment in Ithaca is $1,365 dollars per month. In neighboring Cortland County, the fair market rent for a two-bedroom apartment is $867 per month and in Syracuse it is $966 per month. Fair market rent refers to the price of rent including utilities for privately-owned living spaces that are safe, sanitary and have appropriate amenities, as determined by the U.S. Department of Housing and Urban Development.

“Ithaca has tough housing right now,” Golden said. “We know we need to find affordable housing for our staff, so we’re piloting a program to try and find a solution to this problem.”

Dave Prunty, revenue generation and special projects coordinator in the Office of Finance and Administration, said college staff have been discussing ways to use campus housing to support both long- and short-term faculty at the college for many years. Prunty said with this housing option, the college can bring in more short-term instructors to teach things like master classes and cover for faculty on sabbatical.

“[The college has] really struggled to have people actually come in and do what they want to do programmatically for the students because they can’t find places to house people,” Prunty said.

Prunty said the college has previously had to turn down requests from departments to bring people to the college to teach things like conferences or teach in an adjunct capacity because the college departments could not cover the cost of living in Ithaca.

Connor Lloyd ’22, who works in the campus store, said he learned about the option to stay in Terrace 10 during his interview for his current position. Lloyd said he had struggled to find housing that he can afford in Ithaca and he feels like living in Terrace 10 is his only option.

“I would say to be truly independent with the price of living here — only $600 a month — that’s unheard of anywhere else, to have like no roommates, to have privacy and free laundry,” Lloyd said.

According to the college, unlike many other hotels or apartments, people staying in Terrace 10 share communal bathrooms and small kitchens. Guests and residents are provided with bed linens, complimentary Wi-Fi and laundry machines, but the rooms are not air conditioned and are only accessible by stairs.

Prunty said the college has been very clear with residents and guests looking to stay in Terrace 10 about the amenities that are available.

“No one’s being forced to live there,” Prunty said. “So [the amenities] may work for some people, it doesn’t work for others.”

Prunty said the residence hall is currently sold out for Family Weekend and depending on the success of the weekend, Terrace 10 may be used again as a hotel for commencement for the Class of 2023 on May 21, 2023. Prunty said Terrace 10 is particularly popular for Family Weekend because of its low price compared to other hotels in the area. For example, rooms at the Statler Hotel at Cornell University cost between $330 and $460 per night for the weekend of Oct. 1 and 2. According to Expedia, many hotel rooms in the Ithaca area range from $170 to $700 per night for Family Weekend.

Lloyd said he lived in Terrace 10 as a student at the college and said the space is much quieter as a residence for employees. Lloyd said, however, he thinks when the dorm is full for Family Weekend it will be very different to his experience so far in 2022 but similar to his experience living there as a student.

Prunty said the future of the program is currently unknown and Terrace 10 is being assessed throughout the semester to see if a hotel or residency for college employees are successful uses for the space. Prunty said he has also met with college offices, including the office of admissions, to determine if there are other ways to make the space more useful.

“This is a pilot this year to see how it goes and whether we will or will not be able to fill Terraces in for next year,” Prunty said. “It’s all based on the admission numbers. I think this experience so far has shown that this is working … but there are a host of other needs on campus.”

Lloyd said he is concerned about the possibility that this option could not be available next year.

“I didn’t know it was a one-year thing,” Lloyd said. “I would say hopefully this is a continued thing as it is beneficial to the college, as there’s no way to fill all the rooms throughout the whole campus and they can do things like house faculty before they find permanent housing, or people like me, who are just kind of out in the world.”

I wanted to provide the campus community with some information and reassurances following the Sept. 2 Commentary by Matan Berman.

Letter to the editor: Terrace 10 update from Office of Facilities