Students living in the Terrace residence halls have recently complained about mice in their rooms. 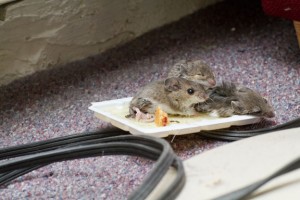 There have been four instances of mice this semester in the Terraces in which the Office of Public Safety has been called or a maintenance request has been submitted to deal with the rodents, Ernie McClatchie, director of facilities, grounds and transportation, said.

Sophomore Nikita Slaughter, a Terrace 10 resident, said she found mice in her room after winter break. She called Public Safety, and two kinds of traps were set for the mice.

“They ended up catching five of them and they just kept multiplying,” she said. “Public Safety would come and pick them up, but it would take them a while to get the mice out of the room, so usually I had to discard them myself.”

McClatchie said Ithaca College has a contract with ACME Pest Control to get rid of the mice. Two kinds of traps are used — a sticky strip with an odor that attracts mice and a Victor Snap Trap that kills the mice on impact.

McClatchie said the four work orders for mice are nothing out of the ordinary at the college.

“It comes with the territory sometimes,” he said. “If it happens, we have our pest services put up traps and see if there are any holes to see if there is anything we can fix from a maintenance viewpoint. We stress that it’s important to leave areas tidy and clean and not to leave garbage lying around.”

McClatchie said the mice come to the Terrace resident halls because they are closer to the woods.

“Mice often come out of the woods area and when they look for a place to live and get in to stay warm, they look for the closest building,” he said. “Since Terrace 10 is closer to the woods, they are probably closer to where the mice may be living.”

Sophomore Hayley Nickerson, a Terrace 10 suite resident, said she found a mouse in her bedroom last night. Public Safety set up sticky strips in her suite, and this morning three more mice were found in her common room.

“It’s a little unsettling, but Public Safety did come right away,” she said. “They were really nice and really calm.”

McClatchie said mice flocking to warm areas and students’ cleaning habits around breaks both make the fall season a typical time to see mice in the dorms.

“Sometimes when students leave campus for breaks, they leave a lot of trash around and don’t clean it up so it seems to draw the mice.”

Sophomore Mallory Brewer, a Terrace 11 resident, said she discovered mice in her room after finding hole in a bag of sugar and in a suitcase. She thinks the mice first came into her room through a hole in the heater. She said having mice in her room bothered her.

“It’s dirty,” she said. “I’m not afraid of them personally, but they are just disturbing. I feel dirty with them running around my room. They should stay outside.”