Then there were three

The secret is finally out. This week, the Ithaca College Mascot Selection Task Force announced the three finalists in the college’s search for the next Bomber. The finalists include a phoenix, flying squirrel and lake beast. 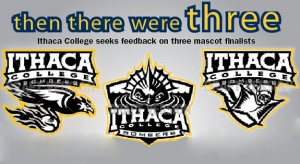 The college announced a search for a new mascot on Nov. 19 to correspond with its branding initiative. Between Nov. 30 and Jan. 12, the task force accepted suggestions from students, faculty, staff and alumni. Later in January, the task force selected three finalists from more than 250 submissions, and it has since been working with Rickabaugh Graphics, an outside rendering firm, to develop working visual representations of the finalists.

Dave Wohlhueter ’60, a task force co-chair, said the group spent hours looking at submissions, and the finalists were chosen because they met certain criteria.

The first finalist to be announced was the phoenix, a mythical bird that references the City of Ithaca’s Greek origins, Wohlhueter said. Ithaca was named after the Greek island of Ithaki in 1804, according to the city’s website.

Mike Tannenbaum ‘09, a former football player and one of three individuals to separately submit the idea, said the phoenix represents the spirit and resolve of the campus community.

“It’s strong, [and] it’s resilient,” Tannenbaum said. “It’s going to be an image that inspires people, very much like Ithaca College students.”

The flying squirrel, which was announced Tuesday, also possesses local roots. Though they are hard to spot, two separate species of the squirrel have been identified at the Fall Creek Gorge.

Sybil Conrad, assistant director of the Campus Center and Events Services and one of three parties to submit the flying squirrel idea, said the animal will generate excitement on campus.

“When I came upon the idea of a flying squirrel, that was the one animal where the name ‘Bomber’ seemed to fit perfectly,” she said.

The lake beast, which was released yesterday, pays homage to a Cayuga Lake legend that’s more than a century old. The Ithaca Journal has documented instances of local residents spotting the serpent-like creature, nicknamed “Old Greeny” and “Cayuga Katie,” with the latest sighting in 1979, according to a 2005 article.

Andrea McClatchie, operations and events coordinator of intercollegiate athletics, said she submitted the concept, which didn’t relate to Bomber.

“Whatever you pick, it just automatically is going to have to be associated with the name,” she said. “I didn’t pick this to go with the Bomber name.”

Rachel Reuben, associate vice president of marketing communications and one of the four task force co-chairs, said even though the mascot search corresponds with the college’s branding initiative, the process was always student-driven.

The history of the name “Bombers” dates back to 1940. Mike Lindberg, associate director of intercollegiate athletics and a task force co-chair, said Harold Jansen, a regional sportswriter, coined the term in a story after the basketball team made several long-range jump shots in a comeback win.

Lindberg said though the college will adopt a new mascot, the name Bomber will not change.

“The term ‘Bomber’ is a statement of honor,” he said. “It’s about champions, it’s about success, it’s about pride [and] it’s about the sacrifices one makes for the greater good.”
Several mascots have graced the sidelines in support of the Bombers yet failed to stick around, but Reuben said this search is unmatched.

“The fact that we had a unicorn, a rooster and a Bomber man — the pilot — none of that was ever college-wide, administration or student or certainly not athletic driven,” she said.

Today, the task force will send out surveys to current and prospective students, faculty, staff and alumni for feedback on the three finalists and their draft logos, Wohlhueter said.

The task force will review the suggestions in May and announce the winner in late June or early July, and the costume and logo will be unveiled around November.

Members of the campus community expressed mixed opinions on the three finalists.

Sophomore Alex Bedrosian, a member of the football team, said he thinks the mascot finalists do not jibe with the Bomber name.

“Imagine walking out on to the Cortland field during Cortaca, and you see the Cortland [Red] Dragons and the Ithaca Flying Squirrels,” he said. “We’ll get laughed at.”

Junior Matt Oakley said he thinks the flying squirrel is a creative mascot that most aptly represents the campus community.

“When I think of a squirrel, I think of a cute, friendly, open little rodent that just enjoys himself,” he said. “It kind of represents Ithaca.”

Some suggested ways to improve the finalists.

Senior Corey Jeffers created a Facebook group in an attempt to make the phoenix an ice phoenix, and within three hours, it gained more than 200 members. Jeffers said an ice phoenix is more original and represents the area’s cold climate.

“While we vote for this creature, why not take it to another level and have that mythical creature be formed of ice,” he said. “That would actually present a mascot that depicts what our school’s about.”

“In the past three days, I haven’t seen students so interested and so intrigued in something over my past four years here,” she said.