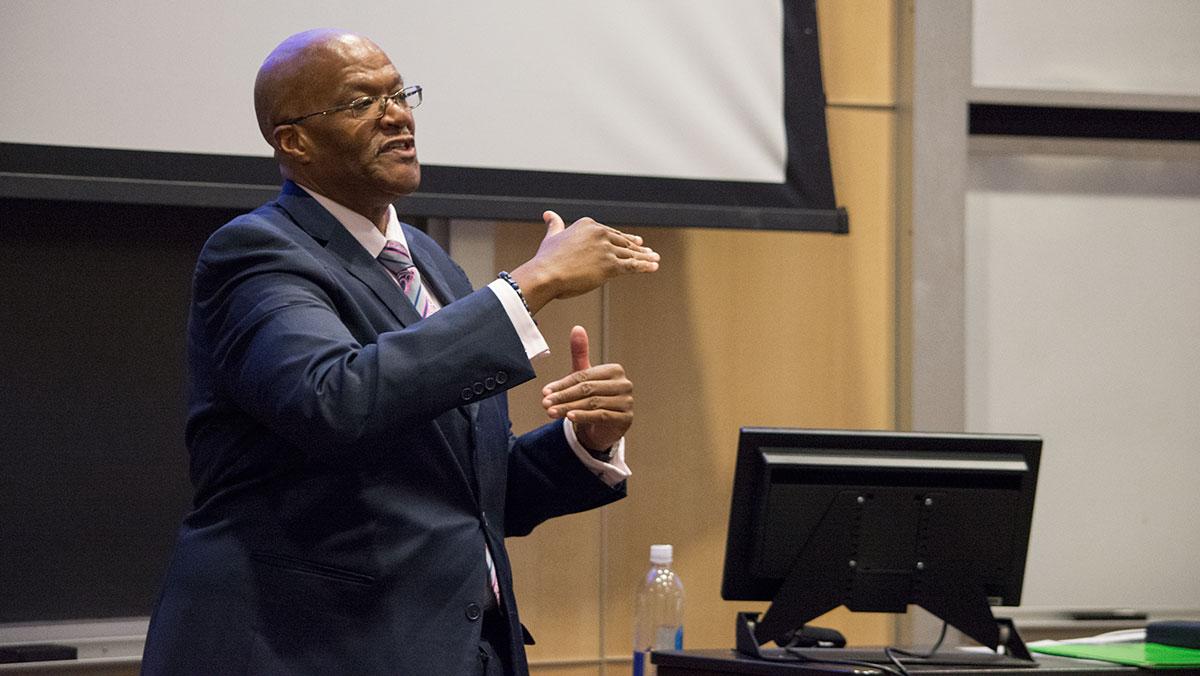 Kevin Williams is currently the vice president for enrollment management and retention at Talladega College in Alabama, a position he has held since August 2014. He also previously served as the dean of enrollment management and diversity at Mississippi Valley State University, as well as the dean of admissions and recruitment at Morehouse College.

All the students present at the event were part of the presidential search committee and denied to comment. All other members in attendance were unable to comment.

Williams was the first of the three candidates thus far to give a PowerPoint presentation to introduce himself to the approximately 25 faculty members, students and members of the administration who attended the forum.

He said what he has been most proud of throughout his career is the success he has had in increasing enrollment and diversity at the institutions of higher education he has served. Under his current leadership at Talladega College, overall enrollment increased 21 percent from Spring 2015 to Fall 2015, according to his resume.

Williams said his mission for enrollment management at Ithaca College is to develop an organization that recruits, admits and supports an optimal number of students, which ensures both the financial viability and academic goals of the institution.

He said his first steps in this position would be to build trust, ask questions and look for ways to make an immediate impact on the campus community.

Williams said retention is a significant part of overall student success, and he said to have an effective enrollment management program, there needs to be a focus on keeping the students you have.

Steve Savage, associate vice president of the division of institutional advancement and communication, asked Williams about his strategies for gaining support and financial contributions from alumni and parents to impact enrollment. Williams said he has found great success in connecting parents of current students with the parents of prospective students to share their personal experiences, as well as engaging alumni to act as recruiters.

Gerald Hector, vice president for finance and administration, asked Williams how he would reassure parents who felt uncomfortable with the issues raised around race and diversity on campus brought to the forefront by student protests last semester.

Williams said it is important to deal with and talk about these issues directly, and approach them as a learning experience for the campus community to move the entire institution forward.

“We have to talk about the steps that have been taken — that there’s not just an action plan that’s going to be put on paper, but there are certain things that are actually going to be done to address it,” Williams said. “You can’t fix what you can’t face.”

Roger Richardson, the college’s chief diversity officer, said that is exactly the approach that was taken with parents approximately three weeks ago during Ithaca Today, the largest event held for admitted students.

“Our approach is not to avoid honest and direct interactions with our students on campus or with one another,” Richardson said.

Williams said what drew him to the college was its “progressive nature” and the way in which “it prepares students for the global community.” He said he feels the college is the best fit for the next step in his professional career and somewhere he would want to be for the “long haul.”